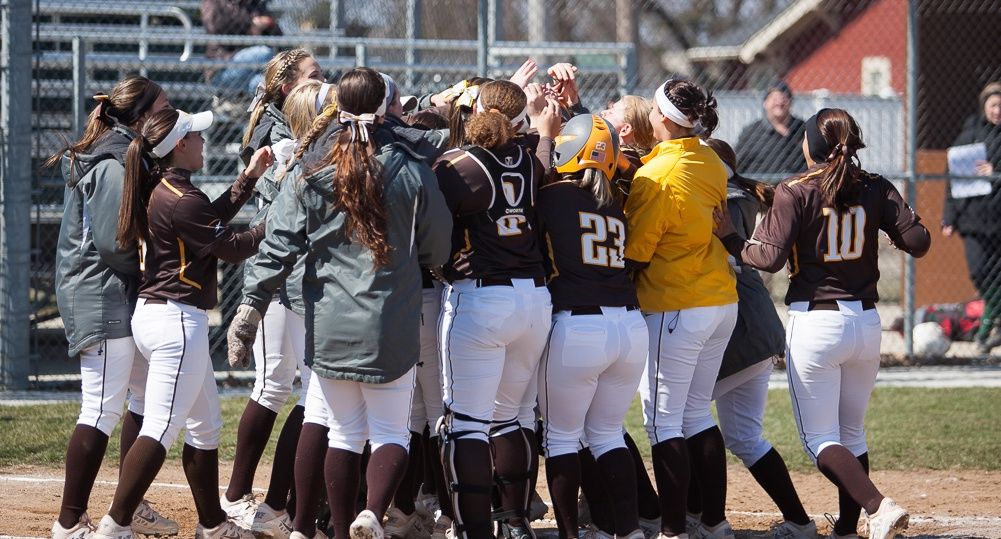 The Valparaiso softball team plated 17 runs in a Horizon League doubleheader at home Saturday against defending league champion Green Bay, but it would only be enough for a split of the two games, as after capturing the opener by a 10-2 final, the Crusaders dropped a 12-7 decision in the nightcap.

“I wasn't happy with the first day of the series – I don't think we competed the way we're capable of,” said Crusader head coach Kate Stake.  “Today, I think we broke the game down into manageable segments – we approached each inning independent of every other inning. The first game, we won or tied every inning.  The second game, Green Bay got the best of us, but I still felt we were able to re-focus and take each inning individually - that approach helped us a bit.”

After falling in the opener of the series on Friday, the Crusaders wasted no time getting on the board on Saturday, as senior Tarah McShane (Streamwood, Ill./St. Edward) launched a two-out solo homer to straightaway center field in the bottom of the first.  But just as it happened Friday, Green Bay would be next to score and claim the lead, as Ashley Baker delivered a two-run, two-out double in the top of the fourth to put the Phoenix on top, 2-1.

But unlike Friday, Valpo was able to answer immediately in its next turn at bat.  A single by senior Lindsey Norway (Chicago, Ill./Chicago Christian) and pinch-hit walks by freshmen Jasmine Ramirez (Litchfield Park, Ariz./Millennium) and Brenna Boyle (St. John, Ind./Andrean) loaded the bases in the bottom of the fourth with one out.  Sophomore Taylor Lawson (Tucson, Ariz./Sahuaro) stepped to the plate and delivered, slapping a 1-2 pitch down the left field line and out of the reach of the Green Bay left fielder.  The ball rolled all the way to the wall for a triple, clearing the bases and making it 4-2 Crusaders.

Norway connected on a sacrifice fly in the bottom of the fifth to extend Valpo’s lead to 5-2, and the Crusaders would finish out the victory via run rule in the sixth inning.  After the first two batters of the inning made outs, Valpo drew three straight walks to load the bases.  A Green Bay error extended the inning, plating freshman Stephanie Moreno (Murrieta, Calif./Murrieta Valley) to push the lead to four runs.  Then, fellow rookie Taylor Nadler (New Haven, Mo./St. Francis Borgia) took the first pitch she saw and drove it to the fence in left-center for a bases-clearing double, driving in three runs.  Two pitches later, Norway lined a double down the left-field line, scoring Nadler to close out the win.

Freshman Ashlyn Montgomery (Lebanon, Ind./Lebanon) earned the complete-game win in the circle for Valpo, improving to 4-2 as she scattered eight hits over her six innings of work and didn’t walk a single batter.  Briana Cavin took the loss for Green Bay.  Nadler went 3-for-4 with the big three-RBI hit, while junior Kaitlyn Ranieri (Schererville, Ind./Lake Central) was a perfect 3-for-3 with a walk and scored two runs.

Green Bay struck first in the nightcap on an RBI single by Jaclyn Delagrange in the top of the first, but riding the wave of momentum from the end of the opener, the Crusaders struck back in a big way in their half of the inning.  It took just three pitches for Valpo to tie the game, as Lawson singled, Moreno followed with a double and McShane brought home Lawson with a sacrifice fly.

After Ranieri drew a walk, the Crusaders sacrificed the runner at first, as she was caught stealing to allow Moreno to scamper home from third and make it 2-1 Valpo.  Back-to-back triples by sophomore Jorgi Calombaris (Frankfort, Ill./Lincoln-Way East) and Nadler plated another run, and Nadler would score on a Green Bay error to extend the Crusader lead to 4-1 through one inning.

Valpo had a golden opportunity to extend the lead in the second, as a trio of walks loaded the bases with two outs, but a strikeout ended the threat.  The Phoenix would go on to score six unanswered runs to take the lead, thanks to a two-run triple in the third and two-run homers in the fifth and sixth to push the lead to 7-4.  Valpo inched back to within one run in the bottom of the sixth, courtesy of a two-run blast by Ranieri, but a five-run top of the seventh proved to be too much to overcome, as a pinch-hit solo homer from sophomore Sam Stewart (Frankfort, Ill./Lincoln-Way East) wouldn’t be enough to help rally.

Heather Sanderson picked up the win in the nightcap for Green Bay (8-12, 2-1 Horizon), throwing the first six innings.  Junior Taylor Weissenhofer (Orland Park, Ill./Lockport Township) took the loss for Valpo, falling to 0-6 as she surrendered five runs in five innings of work.  Ranieri reached in all four of her plate appearances, walking her first three times up before her homer to make it eight straight times aboard on Saturday.  Calombaris, Lawson and Moreno all had multiple hits as well in the losing effort.

“I think there are times we're leaving too many runners in scoring position, but generally speaking, I’ve been happy across the board with our batting order,” said Stake.  “I think sometimes I’m more confident in them than they are in themselves.  If they can go in with the mindset that they're better than the pitcher, I think we’ll see even more success at the plate.  Even without that mindset sometimes, our batters can be scary the way they swing the bat.”

Valparaiso (7-16, 1-2 Horizon) steps out of league play on Tuesday for a home twinbill against Central Michigan.  First pitch of the doubleheader is slated for 3 p.m., and live coverage will be available at ValpoAthletics.com.

“Like I tell the team, I think softball is a sport where playing games makes you better, so I look forward to mid-week games,” said Stake.  “To get at-bats, balls on defense and opposition batters faced, I think it’s definitely more beneficial to us than a day of practice.  Anytime you can compete, working on both the physical and mental part of the game, will hopefully help out as we continue league play next weekend against Wright State.”