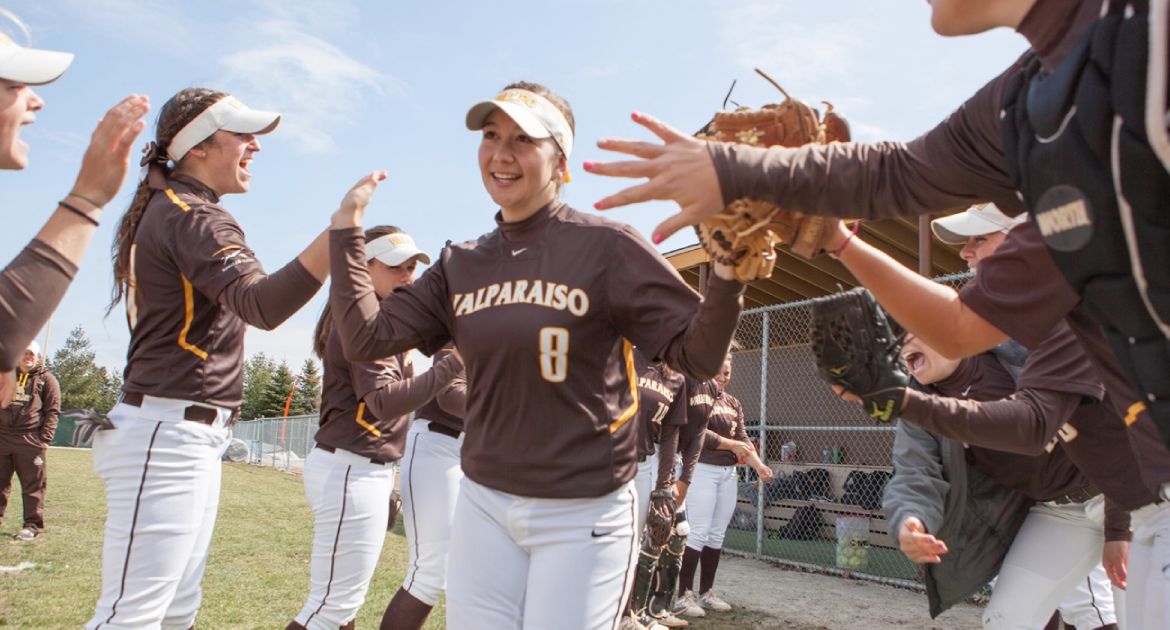 The Valparaiso softball team fell victim to the home run ball in a non-league doubleheader Wednesday afternoon on a warm, sunny day in Indianapolis, giving up seven home runs as the Crusaders dropped the two games by final scores of 6-4 and 11-3 to IUPUI.

“There are two different directions when you talk about command,” said Crusader head coach Kate Stake.  “Early in the season, it was very clear our pitching didn't have command, because we were walking a lot of batters.  The problem is that when you find the plate, you still have to have command on the plate.  When you don’t have that command, you do what we're doing now – leaving the ball in the middle of the plate and giving up home runs.  The athletes we’re playing against are too good to leave the ball over the middle - it's about spotting the ball and about getting ahead of batters.”

IUPUI struck first in the opener, as Maggie Good delivered an RBI single in the bottom of the second.  The next innings saw the Jaguars’ Eryn Dillon deliver their first home run of the day – a two-run shot which gave IUPUI a 3-0 lead.  But the Crusaders responded in the top of the fourth, as senior Tarah McShane (Streamwood, Ill./St. Edward) knocked a one-out single through the infield and junior Kaitlyn Ranieri (Schererville, Ind./Lake Central) followed by driving an 0-2 pitch the other way for a two-run homer to left center, cutting the deficit to 3-2.

The Jaguars threatened to add to their lead in the bottom of the fourth, putting two on with one out, but Crusader relief pitcher Taylor Weissenhofer (Orland Park, Ill./Lockport Township) struck out back-to-back batters to keep it a one-run game.  Then, in the fifth, senior Lindsey Norway (Chicago, Ill./Chicago Christian) led off with a double and junior Sierra Pico (Las Vegas, Nev./Legacy) followed with a walk.  The two would eventually score – Norway on an RBI base knock from freshman Stephanie Moreno (Murrieta, Calif./Murrieta Valley) and Pico on an error following a Moreno stolen base – to give Valpo its first lead at 4-3 through four and a half innings.

The lead would last just eight pitches, however, as Dillon and Ali Mosier hit back-to-back solo homers to lead off the bottom of the fifth for the Jaguars.  IUPUI added an insurance run on a sacrifice fly in the sixth, and while the Crusaders put the potential tying runs on base in the top of the seventh, a strikeout would end the opener in the Jaguars’ favor.

Weissenhofer took the loss in relief in the opener, giving up three runs in 2.2 innings while striking out four to fall to 0-7.  Freshman Ashlyn Montgomery (Lebanon, Ind./Lebanon) started in the circle and gave up just two earned runs in 3.1 innings of work.  Brooke Boetjer earned the win for IUPUI with three shutout innings of relief work.  Moreno and Ranieri each tallied a pair of hits in the opener.

Valpo drew first blood in the nightcap in its first turn at bat, as Moreno walked with one out and eventually scored on an RBI single from sophomore Jorgi Calombaris (Frankfort, Ill./Lincoln-Way East).  But the Jaguars used the home run ball to claim the lead, as Taylor Chitwood hit a two-run homer in the second and Mosier connected on a solo shot in the third to make it 3-1 IUPUI through three innings.

Moreno again helped start a rally in the fifth, driving a one-out double to the right-center gap and coming around to score on a Ranieri groundout.  Later in the frame, two singles and a walk loaded the bases for Pico, who delivered an infield single to plate pinch-runner Lanie Callaghan (Elburn, Ill./Kaneland) and tie the game at 3-3.  With the bases still loaded and two outs, however, Boetjer registered a strikeout to keep the game tied, and IUPUI would score four runs each in the next two innings – including a pair of two-run homers - to claim the win.

Junior Mollie Lindeman (Hebron, Ind./Hebron [PNC]) took the loss to fall to 3-8, starting and giving up five runs in 4.1 innings of work, while Boetjer improved to 15-8 with her second relief win of the day for IUPUI (21-10).  Calombaris and Moreno each picked up two base hits, the latter registering her fifth consecutive multi-hit game.

“We missed a few timely hits today, but generally speaking, I was again happy with our offense,” said Stake.  “I think we faced higher caliber pitching than we have in a while.  Both games, we knocked out their starter - we made good adjustments and altered our approach to be successful in the middle innings before their closer came in.  Our goal is to win as many innings as we can, and our hitters have bought into that.  They’re really fighting with the bats to score as much as possible.”

Valparaiso (8-19) returns home this weekend, as the originally scheduled series at Oakland has been moved to the Valparaiso University Softball Field due to unplayable field conditions in Rochester.  The series will open with a single game Friday at 3 p.m., and all three games of the series will have live stats and audio available at ValpoAthletics.com.