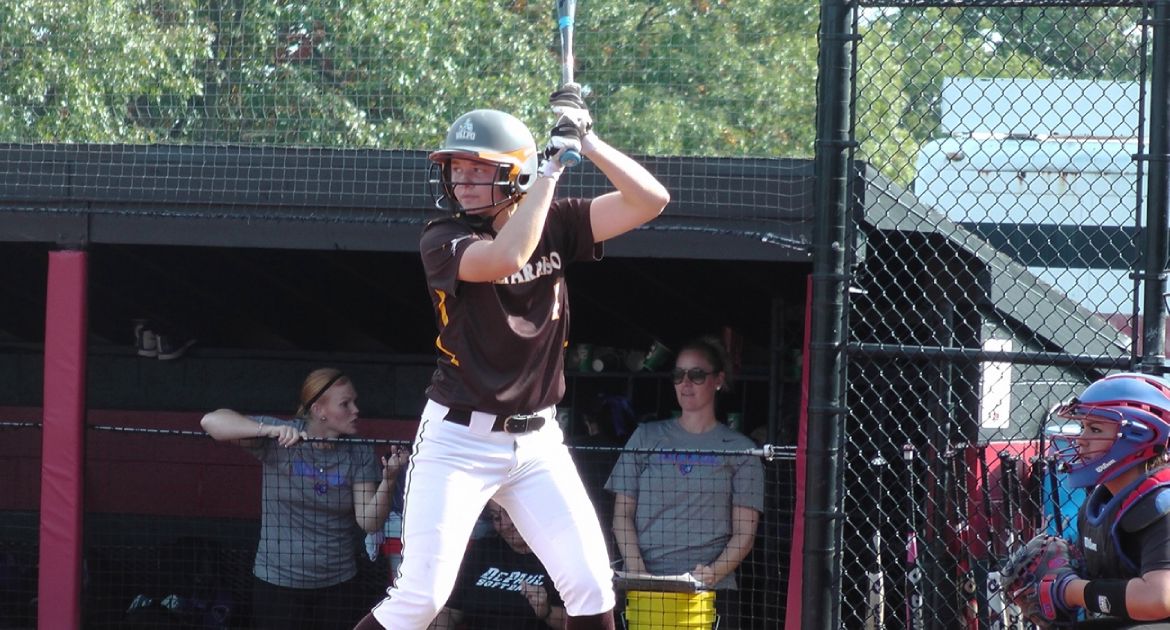 Taylor Nadler picked up hits in both her plate appearances Friday.
Valparaiso at Oakland | April 03, 2015

The Valparaiso softball team fell in its Horizon League series opener to Oakland on Friday at the Valparaiso University Softball Field, 8-0.

Valpo was able to bang out just three singles on the day, two of them coming courtesy of freshman Taylor Nadler (New Haven, Mo./St. Francis Borgia).  Nadler reached scoring position in the second inning, moving up to second base on a single from senior Lindsey Norway (Chicago, Ill./Chicago Christian), but would advance no farther.

Oakland scored the only run it would need on an RBI single from Julia Morales in the bottom of the second, as the Golden Grizzlies were batting as the home team since the series was originally scheduled to be played in Oakland.  Morgan Muron picked up an RBI double in the fourth inning, and Morales then connected on a grand slam in the fifth to break the game open.  Oakland scored two runs in the sixth inning to close out the game.

Nadler and Norway were the only Crusaders to reach base in the series opener, as Oakland (13-15, 4-2 Horizon) starter Erin Kownacki went the distance, surrendering just the three hits and walking none while striking out five to improve to 8-7.  Freshman Ashlyn Montgomery (Lebanon, Ind./Lebanon) took the loss for Valpo, giving up four runs in four-plus innings of work in the starting assignment.

Valparaiso (8-20, 2-4 Horizon) closes out the series with the Golden Grizzlies on Saturday with a doubleheader.  First pitch of game one is set for 1 p.m., and live stats and audio (WVUR, 95.1 FM, Valparaiso) will be available on ValpoAthletics.com.