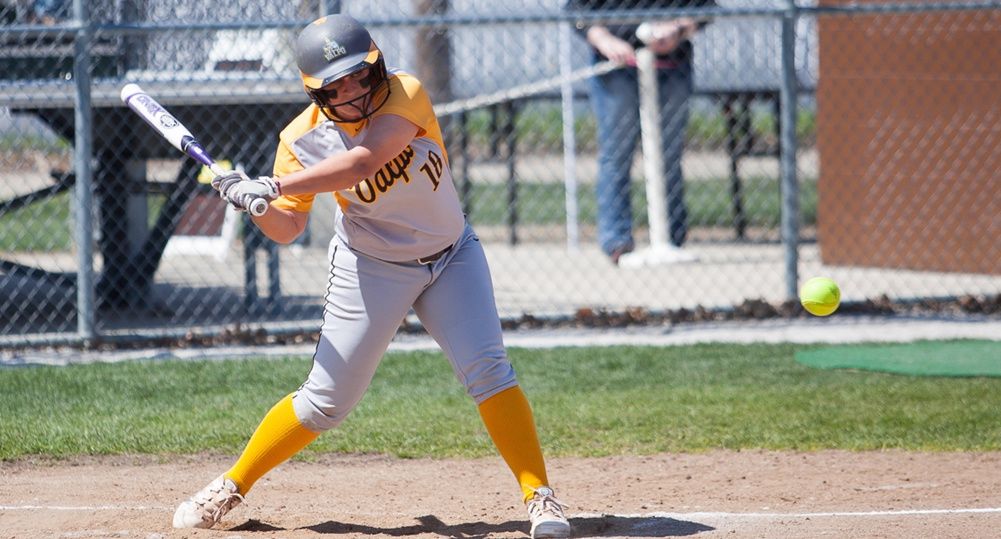 The Valparaiso University softball team fell short in a pair of comeback attempts in Horizon League play Saturday afternoon against UIC, dropping league games by final scores of 11-9 and 11-5 to the Flames.

The Crusaders scored first in the opener against the Flames after UIC left a pair of runners on base in each of the first two innings. Freshman Taylor Nadler (New Haven, Mo./St. Francis Borgia) opened what would be a strong day at the plate with a one-out single back through the middle and scored two batters later on a hard-hit double to left from junior Mollie Lindeman (Hebron, Ind./Hebron [PNC]).

UIC would need just two pitches to take the lead, however, as Eleni Polites led off the top of the third with a first-pitch double and Tiana Mack-Miller followed with a first-pitch homer to left-center field to make it 2-1 Flames. The Flames added two more runs later in the inning with two outs, as Laura Swan and Erica Hampton picked up back-to-back run-scoring base hits.

Trailing by three runs through two and a half innings, Valpo responded immediately in the bottom of the third. Sophomore Taylor Lawson (Tucson, Ariz./Sahuaro) led off with a line-drive single just inside the left-field line, and freshman Stephanie Moreno (Murrieta, Calif./Murrieta Valley) followed with a full-count single to left-center. Junior Kaitlyn Ranieri (Schererville, Ind./Lake Central) stepped in, took four pitches and then drove a no-doubt home run to straightaway center field, tying the game at 4-4.

The Crusaders weren’t finished, however, needing just three more pitches to regain the lead. Sophomore Jorgi Calombaris (Frankfort, Ill./Lincoln-Way East) wasted no time following Ranieri’s round-tripper, driving the first pitch to the right-center wall for her third triple of the season. Two pitches later, Nadler drove a ball to medium-deep center field, more than enough to advance Calombaris the final 60 feet for a sacrifice fly and give Valpo a 5-4 lead.

UIC reclaimed the lead in the top of the fourth, scoring three runs on five singles to go ahead 7-5. A two-run home run from Mack-Miller – her second four-bagger of the game – and a two-RBI single by Swan pushed the Flames’ edge to 11-5 as the game reached the middle of the fifth inning.

But the Crusaders weren’t done fighting. Moreno walked to lead off the bottom of the fifth, and Ranieri followed with a moon shot to center field – her second home run of the day and eighth of the season. After a UIC pitching change, Calombaris rapped the first pitch she saw back through the middle for a single. Senior Tarah McShane (Streamwood, Ill./St. Edward) stepped up and drilled a 2-1 pitch over the fence in right-center field for the second two-run homer of the inning for Valpo, bringing the Crusaders back within 11-9.

Lindeman took the loss in the circle for Valpo, falling to 3-11 after surrendering nine runs in 4.1 innings of work. Bridget Boyle earned the win for UIC and improved to 6-4 despite giving up seven runs in four-plus innings in the circle, while Elaine Heflin picked up her second save of the year by twirling the final three innings. Ranieri went 3-for-3 with a walk and five RBIs to lead the Valpo offense in a 12-hit effort and was backed up by two hits each from Calombaris and Lawson. Three different Flames posted three hits apiece as UIC ended the opener with 19 hits.

McShane led off the bottom of the second by getting hit by a pitch – the first of two times she would wear a pitch in order to reach first in the nightcap. Nadler lined a double to the left-center gap on the very next pitch, advancing McShane up to third base, and the senior would then trot home with ease on a failed pickoff attempt by Hampton behind the plate for the Flames.

UIC responded with a run of its own in the third on a run-scoring single from Polites, but Valpo answered with its third four-run inning of the day in the bottom half of the frame. All four runs ended up scoring with two outs, starting with an RBI single by Nadler to score Calombaris. Junior Sierra Pico (Las Vegas, Nev./Legacy) followed by lining a full-count pitch back through the box to plate both Nadler and McShane to make it 6-4. Freshman Brenna Boyle (St. John, Ind./Andrean) then drove a pitch into the right-center gap, splitting the outfielders and rolling all the way to the wall for an RBI double, bringing in Pico to cut the deficit to 6-5.

The Crusaders were unable to put any more runs on the board, though, leaving six on base over the next three innings – including a flyout with the bases loaded in the fourth. UIC closed the scoring with a sacrifice fly in the sixth and then four runs in the seventh, capped by a three-run home run from Peterson.

Junior Taylor Weissenhofer (Orland Park, Ill./Lockport Township) fell to 0-9 as she took the loss, starting and registering two outs. Heflin picked up the complete-game win for UIC (17-14, 8-2 Horizon), scattering 11 hits over her seven innings. Nadler led the Valpo offense with a career-best 4-for-4 effort at the plate, while Calombaris also tallied a pair of hits in the nightcap.

Valpo (8-27, 2-8 Horizon) closes out the series with the Flames on Sunday from the Valparaiso University Softball Field. First pitch is slated for noon, and live audio can be heard on WVUR, 95.1 FM, Valparaiso and online at ValpoAthletics.com, which will also have a link for live stats.