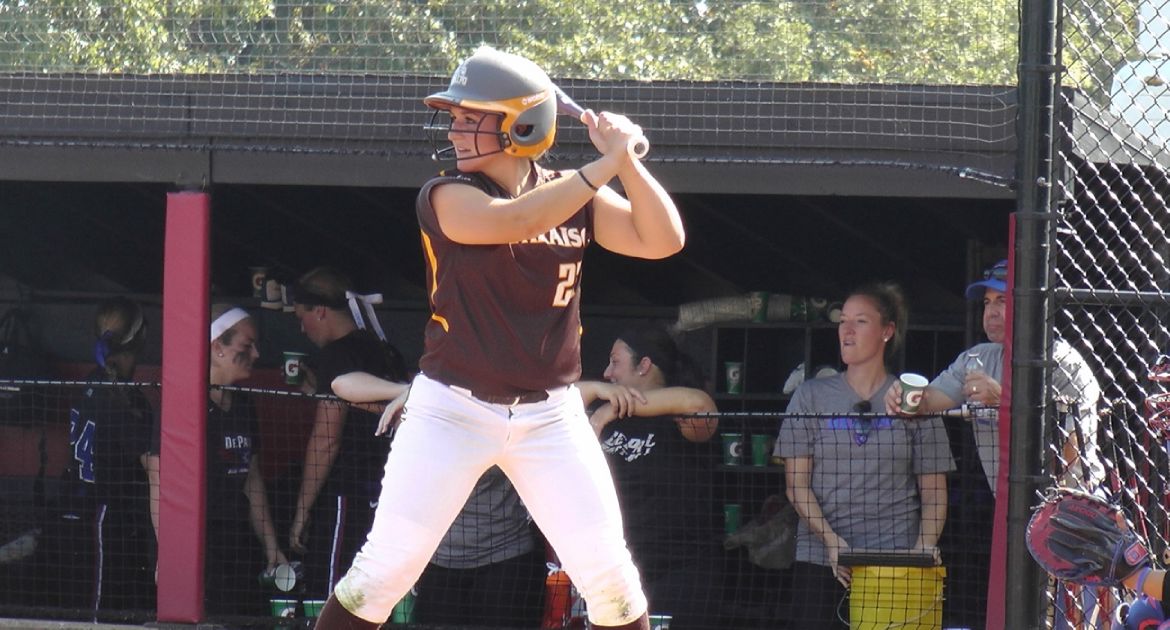 Kaitlyn Ranieri had a pair of hits on Friday.
Valparaiso at Cleveland State | April 17, 2015

The Valparaiso University softball team led after its third time at bat in its series opener at Horizon League foe Cleveland State Friday afternoon, but the Vikings scored eight unanswered runs as the Crusaders fell by a 9-2 final.

Valpo fell behind after the opening inning on a bases-loaded RBI infield single by CSU’s Mackenzie Joecken, but Crusader starter Ashlyn Montgomery (Lebanon, Ind./Lebanon) stranded the bases loaded by inducing a soft lineout.  Montgomery also stranded a runner in scoring position in the second inning as well, as Valpo trailed 1-0 through two innings.

But the lead wouldn’t last for Valpo, as Wright State struck back in the bottom of the third.  With two in scoring position and one out, sophomore Jorgi Calombaris (Frankfort, Ill./Lincoln-Way East) kept the Vikings off the board by coming home on a grounder to second, with Stauffenberg applying the tag at home to nail Cynthia Woodard for the second out.  But Hannah Yoe and Alisha Silva picked up back-to-back RBI base knocks for CSU to give it a 3-2 lead through three innings.

Cleveland State added three more runs in the fourth, courtesy of an RBI double by Woodard and a two-run double from Alyson Broschk, and then scored two more in the fifth on a pair of wild pitches.  Valpo looked to cut into the 8-2 deficit in the top of the sixth, as Ranieri lined a single into left with one out.  Two batters later, senior Tarah McShane (Streamwood, Ill./St. Edward) knocked a single through the left side and an error loaded the bases, but a groundout ended the threat.  CSU plated its final run in the bottom of the sixth, and a leadoff single by senior Lindsey Norway (Chicago, Ill./Chicago Christian) went for naught in the seventh.

Ranieri went 2-for-3 to lead the Crusader offensive effort, while Woodard picked up three of Cleveland State’s 12 hits.  Montgomery took the loss for Valpo, falling to 6-7 as she threw 4.1 innings on Friday.  Susan Knight earned the complete-game win for Cleveland State (20-16, 5-5 Horizon), improving to 10-6 on the year.

Valpo (9-30, 3-9 Horizon) looks to turn the tables on the Vikings on Saturday, as the Crusaders close out the series against CSU with a doubleheader.  First pitch is slated for noon CT, and both games will have live video available via ESPN3.com.  Links for the live video, as well as live stats, will be available at ValpoAthletics.com.