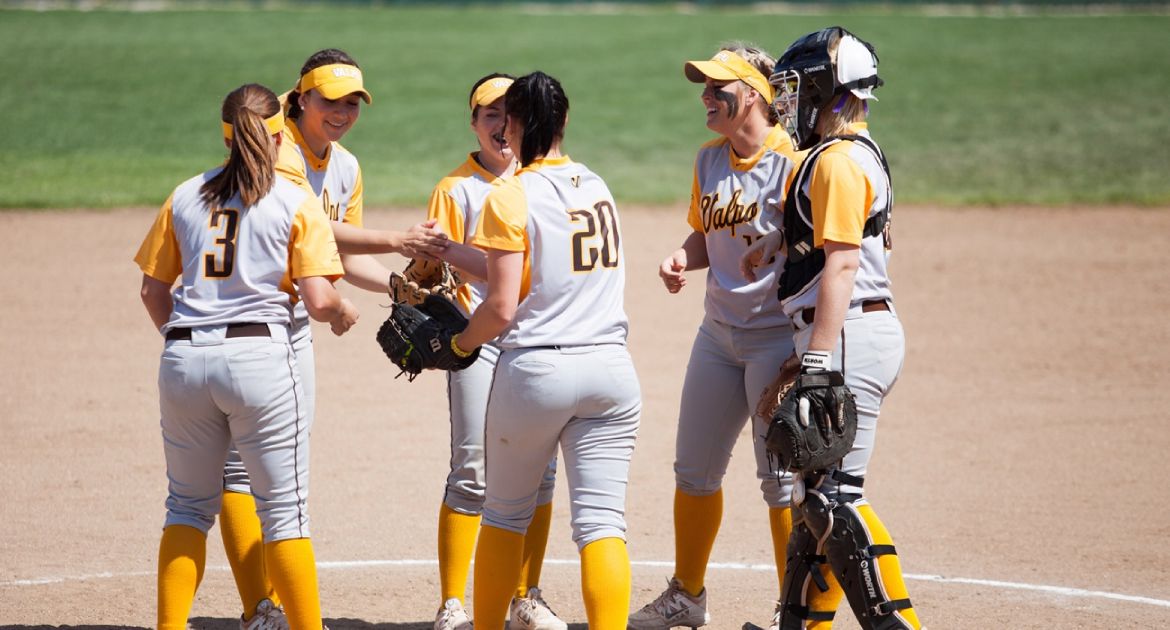 Next Up in Crusader Softball: A key Horizon League series awaits the Valparaiso University softball program this weekend, as the Crusaders travel to Detroit for a three-game set. Valpo will take on the Titans twice on Saturday and once on Sunday in the penultimate weekend of league play, fighting for a spot in the postseason tournament field.

Previously: Valpo dropped a midweek doubleheader at Northern Illinois and lost the opener of its Horizon League series at Cleveland State, but rebounded with a pair of wins last Saturday over the Vikings to take the series, 2-1. The Crusaders downed CSU 7-4 in the opener on Saturday before outlasting the Vikings in the nightcap, 7-6 in 10 innings.

Following the Crusaders: All three games this weekend will have live stats available, with the links active on ValpoAthletics.com. The @ValpoSoftball Twitter account will also have live coverage.

Head Coach Kate Stake: Kate Stake was hired as head coach of the Valparaiso softball program on July 23, 2014 and owns an 11-30 record in her first season as head coach. Stake arrived at Valpo with eight seasons of assistant coaching experience at the Division I level, most recently serving as an assistant at mid-major power Hofstra.

Series Notes: Valpo owns a 31-18 advantage in the all-time series over Detroit, and is a dominating 19-2 against the Titans since joining the Horizon League prior to the 2008 season. The Crusaders swept the Titans in style last season, as three different pitchers threw shutouts in a three-game series sweep (6-0, 9-0, 8-0) at Valpo. Taylor Lawson went 5-for-6 with five runs scored in the series, while Kaitlyn Ranieri was 7-for-9 with eight RBIs.

Tight League Race: Valpo finds itself in the midst of a tight battle for spots in the Horizon League Championship with just two weekends left in the regular season. If the season were to end today, the Crusaders would be on the outside looking in to the six-team tournament field, but Valpo also currently sits just one game out of a tie for fourth place - a tie which includes Youngstown State, the Crusaders’ foe in the final weekend of league play.

On the Road Again: After playing just 10 true road games over the first two months of the season, the Crusaders are in the midst of a stretch of 10 consecutive road contests. Valpo’s series win at Cleveland State was the program’s first series win in Horizon League play on the road since taking two of three at Detroit in April of 2013.

Nadler Hits for the Cycle: Freshman Taylor Nadler was moved back to the cleanup spot in the lineup prior to the Crusaders’ twinbill against Cleveland State on Saturday and responded in a big way. Nadler went 2-for-4 in the opener, including a double and an RBI, and then completed the cycle on the day in the nightcap, tripling in the first inning and homering to lead off the fourth - her first career homer - as part of a 3-for-5, two-run, two-RBI game. Nadler is 13-for-25 over her last nine appearances, raising her season batting average 89 points to .325 in the process.

Moving Up the Charts: Junior Kaitlyn Ranieri has continued to move up Valpo’s career charts in a number of offensive categories. The junior currently ranks in the top-four in Crusader history in average, on-base and slugging. Ranieri ranks third in career walks with 88, just 10 shy of the program record, and is also fifth in total bases (263), seventh in hits (173) and runs scored (101), eighth in home runs (17), ninth in doubles (33) and 10th in RBIs (82). Meanwhile, senior Tarah McShane is tied for ninth in program history in career doubles (33) with Ranieri and also sits ninth in RBIs (87) and home runs (13).

In Search of .400: The .400 mark has been just as sacred in Valpo softball history as it is in the baseball world, as just two Crusaders have hit .400 for an entire season - Jordan Rutkowski, who hit .430 in a 2012 campaign which was the best by a Valpo player in program history; and Kari Wiseman, a Valpo Hall of Fame inductee who hit .423 in 1998. But Ranieri is threatening that mark this season, entering this weekend’s play hitting at a .402 clip, good for third in the league. She also leads the Horizon League with 30 walks, just five shy of Valpo’s single-season record, and is second in the league with a .534 on-base percentage, a mark which would set a new Crusader single-season standard.

In a Pinch: Two of the Crusaders’ biggest hits last weekend came off the bench as pinch-hitters, as Lindsey Norway delivered a run-scoring double and Sam Stewart followed with a three-run homer in Valpo’s four-run sixth inning in the nightcap win over CSU. Overall this year, Valpo pinch-hitters have enjoyed success, going 13-for-35 (.371). Norway is a perfect 3-for-3 with four RBIs in four pinch-hit appearances, while Stewart is now 3-for-7 when coming off the bench as a pinch-hitter.