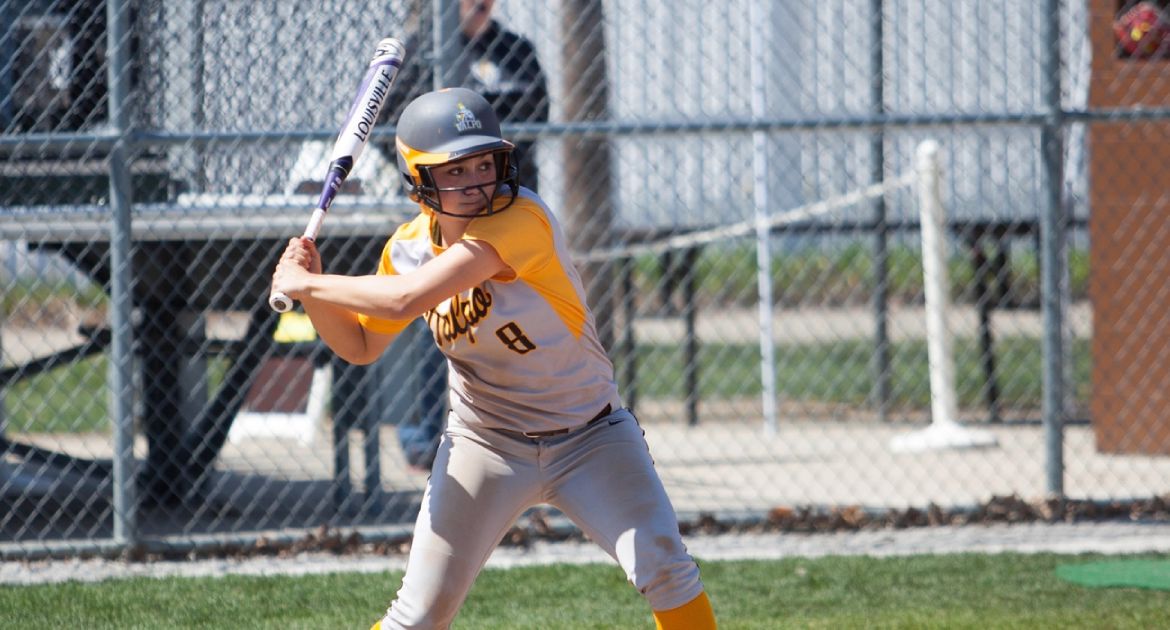 Three home runs, including a pair of mammoth blasts from freshman Stephanie Moreno (Murrieta, Calif./Murrieta Valley), accounted for all seven of the runs for the Valparaiso University softball team in its nightcap at Detroit on Saturday afternoon, as the Crusaders took down the Titans, 7-5. Valpo rebounded from a 16-3 loss to Detroit in Saturday’s opener.

“I value resilience, and we demonstrate it a lot – but I’d like to be the team that just gets it done, instead of the one that bounces back to get it done on the second go round,” said Crusader head coach Kate Stake. “It was important for us to refocus in game two today, and tomorrow, it will be important for us to forgo resilience and just get it done the first time.”

It would take the Crusaders just three batters to get on the board in the nightcap. With one out, sophomore Taylor Lawson (Tucson, Ariz./Sahuaro) lined a full-count pitch into shallow left-center for a single. Junior Kaitlyn Ranieri (Schererville, Ind./Lake Central) stepped in and drilled the first pitch she saw on a rope to straight-away center field. The ball lined off the top of the fence, into the air, and landed beyond the boundary for a homer, giving Valpo a 2-0 lead. For Ranieri, it was her ninth home run of the year, matching her sophomore year total and tying for fifth on Valpo’s single-season chart in the category.

The second inning commenced and, just six pitches in, Valpo had doubled its lead to 4-0. Senior Tarah McShane (Streamwood, Ill./St. Edward) opened the frame by connecting on a line-drive double the opposite way. Moreno then stepped up and delivered the Crusaders’ second home run in as many innings, blasting a titanic shot down the left-field line that was gone the moment it left the bat. The only question from the moon shot was whether it would stay fair, and the third base umpire’s right arm provided that answer, pointing fair to make it a four-run Crusader lead.

Valpo would load the bases later in the second inning with just one out on a trio of singles from junior Sierra Pico (Las Vegas, Nev./Legacy), freshman Jenna Stauffenberg (Kankakee, Ill./Bishop McNamara) and Lawson in an attempt to bust the game open, but a groundout and a strikeout ended the threat. Detroit sliced one run off the lead on a solo homer by Jennifer Cottle to lead off the bottom of the second, and then made it a 4-3 game in the fourth on a two-out, two-run double from Kayla Kostich.

Detroit looked to tie the game or even take the lead in the bottom of the sixth, as a pair of singles and a sacrifice bunt put two runners in scoring position with just one out. But a pair of nice defensive plays ensured Valpo would carry the lead into the seventh inning.

First, with the infield in, sophomore Jorgi Calombaris (Frankfort, Ill./Lincoln-Way East) snagged a hard one-hopper and came home with the throw, in plenty of time for Stauffenberg to tag out the lead runner attempting to score. Then, with runners on the corners and two away, the Titans attempted a double steal, but Moreno cut off the throw to second and returned it home to Stauffenberg, who caught the throw and applied the tag all in one motion for the third out.

“Our defense has kept us in and won us games this year, and today was no different,” said Stake. “We were able to lock it down in the last two innings with a great play at the plate from Jorgi to Jenna, and then a well-executed first and third play where Steph made the correct read and an excellent throw to get the third out at the plate. Steph also made a nice play in the seventh inning where she took a bad hop off her face, but picked it up and was still able to throw out the runner.”

The Crusaders added what proved to be key insurance runs in the top of the seventh inning. Ranieri continued her stellar day with a leadoff single, moved up to second on a sacrifice bunt and then advanced another 60 feet on a wild pitch. Valpo caught an unlucky break when a liner from sophomore Sam Stewart (Frankfort, Ill./Lincoln-Way East) ricocheted off the third baseman’s glove directly to the shortstop, who completed the play to first for the second out.

But on a 0-2 pitch, McShane took one off her body for a hit by pitch, keeping the inning alive and setting the stage for Moreno. The freshman delivered in a big way, connecting on yet another no-doubt shot – this one leaving no question as to whether it was fair or foul, as it easily cleared the left-center field wall for a three-run homer, pushing Valpo’s lead to 7-3. Moreno doubled her home run total on the season entering the game, and her five RBIs were a career high, as it was the first time the freshman finished with more than two runs driven in in a single game.

“Steph put in additional work this week on her swing,” said Stake. “She changed up a couple things, and seems to have found the key. She looked really comfortable in the batter’s box today.”

But the victory wasn’t secured yet, and the Titans took their best shot at rallying, as a two-out double was followed by Cottle’s second home run of the game to close to within 7-5. But a first-pitch flyout to Ranieri in right field closed out the Valpo win and secured the split.

Junior Mollie Lindeman (Hebron, Ind./Hebron [PNC]) earned the complete-game win in the nightcap to improve to 5-11, as she pitched around eight hits and seven walks to give up just the five runs. Hannah Leppek took the loss for Detroit, falling to 3-13 as she surrendered four runs in one-plus inning of work. Lawson registered three hits in the win, while McShane, Moreno and Ranieri all ended the nightcap with multi-hit efforts and Pico and Stauffenberg each reached base twice as well.

In the opener, Valpo threatened in the first on a two-out double by Ranieri, but she was stranded at second, and the Titans took a quick 3-0 lead in the bottom of the first on a three-run homer from Christa McGahuey. The Crusaders cut one run off the deficit in the second as Moreno led off the frame with a walk and eventually came around to score on a run-scoring double from senior Lindsey Norway (Chicago, Ill./Chicago Christian).

Valpo erased the final two runs off Detroit’s lead in the top of the third, as Lawson and Ranieri led off the inning with back-to-back singles and both would come around to score. Lawson touched the plate on a hard liner from freshman Taylor Nadler (New Haven, Mo./St. Francis Borgia), a shot which was caught but resulted in a sacrifice fly, while Ranieri completed the circuit on an RBI double by McShane.

But the tie would be short-lived, as Detroit scored seven runs in the bottom of the third to take a 10-3 lead. The Titans added six more tallies in the fourth, three of which were unearned, to close the scoring.

Junior Taylor Weissenhofer (Orland Park, Ill./Lockport Township) started and took the loss for Valpo after surrendering six runs in two-plus innings. McGahuey improved to 2-16 with the complete-game win in the circle for Detroit (6-38, 2-12 Horizon). Ranieri reached in all three of her plate appearances in the opener, while Lawson tallied two hits as well.

Valpo (12-31, 6-10 Horizon) closes out the series with the Titans on Sunday at 11 a.m. CT. Live stats will be available at ValpoAthletics.com.