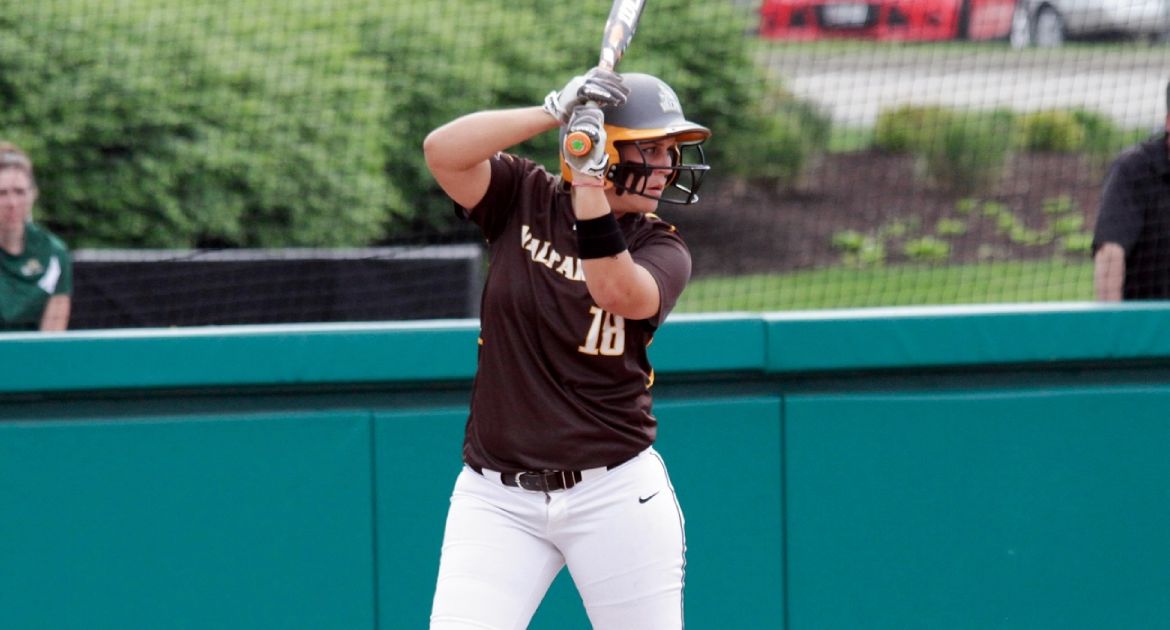 Tarah McShane tied the game in the seventh inning with a two-run homer.
Valparaiso at Detroit | April 26, 2015

The Valparaiso University softball team fell in its series finale at Detroit Sunday afternoon, 5-4, after rallying to tie the game in the top of the seventh inning.

The Crusaders took the lead right away in the first inning, as junior Kaitlyn Ranieri (Schererville, Ind./Lake Central) launched a solo homer down the right-field line. For Ranieri, it was her 10th home run of the year – tied for fourth-most in a single season in program history – and her 19th career round-tripper, which is tied for sixth-most on Valpo’s career charts. Detroit pulled the run back on a two-out bloop single into shallow left in the bottom half of the inning, however.

Neither team threatened again until the bottom of the third, when Detroit put two on with nobody out, but Crusader starting pitcher Taylor Weissenhofer (Orland Park, Ill./Lockport Township) induced a trio of easy fly balls to keep the Titans from taking the lead. Valpo put together a scoring chance in the fifth as junior Sierra Pico (Las Vegas, Nev./Legacy) led off the inning with a drag bunt for a single and moved up to second on a sacrifice, but she would be stranded there.

The Titans pulled ahead in the fifth inning without the benefit of a hit, taking advantage of three walks, a sacrifice fly and a double steal to push two runs across. Valpo replied with one run in the sixth to halve the deficit, as freshman Stephanie Moreno (Murrieta, Calif./Murrieta) was hit by a pitch to lead off the inning and eventually scored on a two-out single by Pico. The Crusaders had a chance to even the score, with runners on second and third following Pico’s base hit, but a groundout ended the threat.

A solo home run from Detroit’s Katy Severson pushed Detroit’s lead back to two runs, but Valpo would stay alive in the top of the seventh, as Ranieri doubled with one out and senior Tarah McShane (Streamwood, Ill./St. Edward) followed with a first-pitch, no-doubt home run to straightaway center field to tie the game at 4-4. But the Titans won in walk-off fashion in the bottom of the inning, as a pair of singles and a Crusader error combined to push the game-winning run across.

Freshman Ashlyn Montgomery (Lebanon, Ind./Lebanon) took the loss in relief for Valpo, surrendering the unearned run in the bottom of the seventh in falling to 6-8. Kat Hoffman picked up the win for Detroit (7-38, 3-12 Horizon), throwing the final two innings for the Titans to improve to 1-3. Pico and Ranieri each had multi-hit games for Valpo, while the latter also walked twice.

Valparaiso (12-32, 6-11 Horizon) steps out of league play for the final time in the regular season Wednesday afternoon at Bowling Green. First pitch of the twinbill is scheduled for 1 p.m., with live stats available at ValpoAthletics.com.