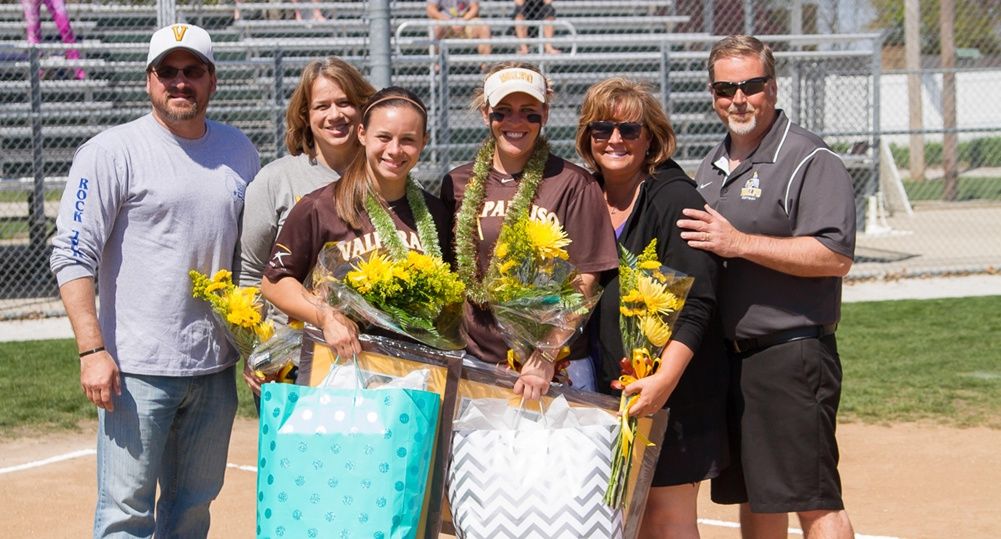 Needing a win on Senior Day at the Valparaiso University Softball Field to secure its berth into the Horizon League Championship, the Valpo softball team did more than enough to get the job done, sweeping Youngstown State by scores of 7-5 and 9-5 to close out the regular season.

Prior to the doubleheader, the Crusaders honored the careers of seniors Tarah McShane (Streamwood, Ill./St. Edward) and Lindsey Norway (Chicago, Ill./Chicago Christian) as they prepared to close out the final home series of their careers. With Saturday’s pair of victories, McShane and Norway have now been a part of 115 wins over their four years at Valpo.

“You can't rally a team around seniors if the seniors are already checked out,” said Crusader head coach Kate Stake. “We’re fortunate to have two seniors who are still completely bought in. So it was easy to get our other 15 players to rally around our two seniors, because both Tarah and Lindsey are excellent examples of teammates whose passion for the game is contagious.”

Knowing they needed a victory on Saturday to make sure of their berth into the Horizon League Championship field, the Crusaders got off to a quick start in the opener with a two-out rally. Junior Kaitlyn Ranieri (Schererville, Ind./Lake Central) walked to get the wheels turning, freshman Taylor Nadler (New Haven, Mo./St. Francis Borgia) singled and McShane walked to load the bases. Freshman Stephanie Moreno (Murrieta, Calif./Murrieta Valley) then knocked a single through the 5-6 hole to plate Ranieri and make it 1-0 Valpo.

YSU would even the game up on a solo homer by Maria Lacatena in the second inning, and take the lead in the third on a home run with the bases empty from Sarah Dowd. The Penguins then added a run to their ledger in the fifth on a one-out RBI triple down the right-field line, a ball that was ruled just fair, from Cali Mikovich. But Mikovich would be stranded on third by Crusader starter Taylor Weissenhofer (Orland Park, Ill./Lockport Township), thanks to a strikeout and a pop-up.

Valpo rallied in the fifth inning to tie the game up, as Ranieri, Nadler and McShane again all reached to load the bases for Moreno. The rookie delivered once again, this time with a line-drive single the other way to score two runs and make it a 3-3 game. The Crusaders had a chance to pull ahead, with runners on second and third and nobody out, but three straight outs left both runners stranded.

It looked like YSU would explode for a big inning in the sixth frame, as two walks and a single loaded the bases with nobody out. Dowd registered a single and Miranda Castiglione drew a four-pitch walk to plate two runs and give the Penguins a 5-3 lead, still with the bases loaded and no outs.

But then an unusual play stunted any YSU momentum and helped the Crusaders escape the jam. Alexandria Gibson sent a low looping line drive towards sophomore Jorgi Calombaris (Frankfort, Ill./Lincoln-Way East) at second base, contact which forced the runners to all hold up. Calombaris muffed the line drive, with the ball dropping directly in front of her, but picked it up and flipped to McShane at first. McShane tagged first base, forcing the batter, and then fired home to catcher Jenna Stauffenberg (Kankakee, Ill./Bishop McNamara), who was standing on home plate.

The throw home resulted in no out, however, as the runner on third was no longer forced after the force play at first base. But the throw also created confusion with the Penguin baserunners, and Stauffenberg sent a return throw to McShane at first, where the senior tagged the YSU runner who started the play on first base, as she was still two steps off the bag.  After time was called, a lengthy umpire conference ensued, and then a re-convening after the Penguin runner on third was initially awarded home plate. When the dust settled, there were two outs, no runs and runners on second and third, and Valpo reliever Mollie Lindeman (Hebron, Ind./Hebron [PNC]) closed out the inning with a strikeout to keep it a two-run game.

Given a new lease on life, the Crusader offense took care of the rest in the bottom of the sixth. Sophomore Taylor Lawson (Tucson, Ariz./Sahuaro) lined a single into shallow left to lead off the frame, and Calombaris followed by drilling a first-pitch double down the left field line to plate Lawson and make it a 5-4 game.

Ranieri then worked a nine-pitch walk, followed up by a Nadler double to the fence – her fourth hit of the game - to score Calombaris and tie the game at 5-5. Following a pitching change, the senior McShane came up with the big hit, fouling off three two-strike pitches before drilling a single back through the middle, allowing both Ranieri and Nadler to score to give Valpo a 7-5 lead. The potential tying run reached base for YSU with one out in the seventh, but Lindeman slammed the door on the threat with back-to-back strikeouts to close out the win and ensure Valpo a tournament berth.

“Our team stayed loose and was confident that whole first game,” said Stake. “It didn't matter whether we were leading or behind - we continued playing loose and with confidence, and I think that's what gave us the opportunity to score those runs in the late innings.”

Weissenhofer struck out a season-high eight batters in pitching five-plus innings in the start, earning a no-decision. Lindeman registered the win out of the bullpen with two innings of one-run ball to improve to 7-11 on the year. Ashley Koziol, the second of three YSU pitchers, fell to 7-11 as she took the loss, giving up four runs in one-plus inning of work. The three through six hitters in the Valpo order combined to go 8-for-11 with five walks, five runs scored and six RBIs in the win. Nadler was a perfect 4-for-4 at the plate – her second career four-hit game – to lead the Valpo offense, while McShane was 2-for-2 with two walks and two RBIs. Moreno also tallied a multi-hit game and drove in three runs, and Ranieri scored three runs and walked three times, in the process setting Valpo’s single-season walks record.

“It's fun when we get to Kat in our lineup, because we know that there’s often opportunities to produce runs quickly once she gets up to bat,” said Stake. “We have a bunch of hitters who can move the line behind her. Whether she gets a hit or ends up being walked, it still creates momentum in our lineup.”

With the spot in the Horizon League Championship guaranteed, the Crusaders came out in the second game and put up seven runs in the first two innings. Valpo pushed two across the plate in its first time at-bat, as Lawson and Ranieri both singled and came around to score – the former following a pair of YSU wild pitches, and the latter on a Penguin error. Youngstown State responded with three runs on five singles in the top of the second to take a brief 3-2 lead.

Valpo wasted no time claiming the lead for good in the nightcap, however. A single by Norway and walks from junior Sierra Pico (Las Vegas, Nev./Legacy) and Lawson loaded the bases with one out. Calombaris knocked a single back through the middle, pushing both Pico and Norway across the plate to give Valpo a 4-3 advantage. Lawson came home on an RBI groundout by Ranieri, and a passed ball allowed Calombaris to cross the plate. Later in the inning, with the bases loaded, Norway – up for the second time in the inning – was hit by a pitch, forcing home Nadler to cap a five-run frame which made it 7-3 Crusaders.

“I don't think it changed the way we played,” said Stake on approaching the second game after clinching a tournament berth in the opener. “Our focus this whole weekend was having fun and playing together in our last opportunity to play at home. So whether a league tournament spot was on the line or not, our players stuck to that, and I felt like we really approached all three games in the same manner.”

YSU scored single runs in the third and fifth innings to slice two runs off its deficit, but left the bases loaded in both the third inning – as Crusader starter Ashlyn Montgomery (Lebanon, Ind./Lebanon) won a battle with a strikeout – and the fourth inning – as Lindeman, who had entered in relief to start the inning, induced a flyout to the warning track in center. Weissenhofer entered in relief with two outs and two on base in the top of the fifth and recorded a strikeout to keep it a two-run game.

Valpo added one insurance runs in each of its final two turns at bat, as Nadler recorded a single back through the circle to score Stauffenberg in the fifth and Lawson turned on a pitch for a base knock through the right side in the sixth to bring Moreno across the plate. Meanwhile, Weissenhofer was sharp as ever, not allowing a baserunner in her 2.1 innings of work and striking out four.

Weissenhofer earned the win as Valpo’s most effective reliever, as Montgomery did not reach the minimum innings threshold for a starter to pick up the win. Koziol suffered her second loss of the day for Youngstown State (18-31, 7-13 Horizon), as she started and surrendered seven runs in 1.2 innings. Lawson, Norway and Ranieri all tallied two hits apiece in the nightcap, while eight of Valpo’s nine starters crossed the plate at least once. Nadler went 1-for-1 with three walks to cap a day in which she reached base in all eight of her plate appearances.

“Taylor did an excellent job in relief in the second game,” said Stake. “It gives the coaching staff a lot of confidence going into the tournament knowing that our pitching has been performing at a higher level over the past week.”

Valpo (15-33, 9-11 Horizon) now awaits the official bracket release for the 2015 Horizon League Championship from the league office. The tournament begins on Wednesday, with the winner earning the league’s automatic berth into the 2015 NCAA Tournament.