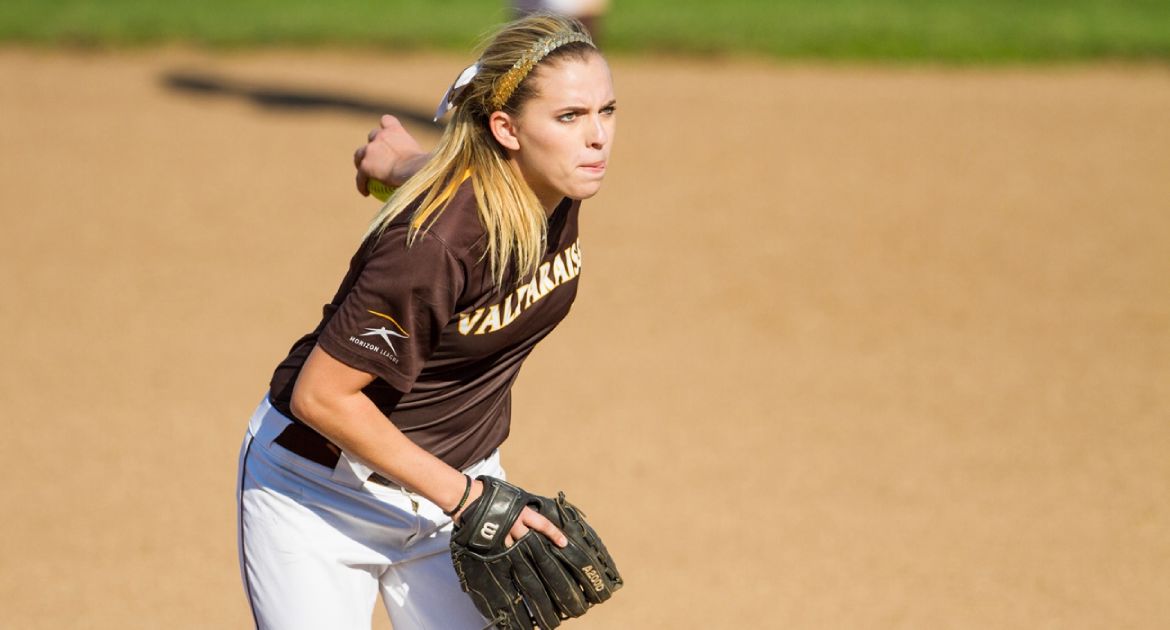 Valparaiso University senior Taylor Weissenhofer (Orland Park, Ill./Lockport Township) tossed one of the best games of her career, posting a one-hitter with 12 strikeouts as the Crusaders took down Santa Clara in Las Vegas on Sunday, 10-0. The Crusaders battled host UNLV in the finale of the Rebel Classic, but ultimately fell to the Rebels by an 8-5 final.

Weissenhofer’s 12 strikeouts tied for the second-highest single-game total of her career, only topped by her 17-strikeout performance against Colgate as a freshman. Both that and her prior game with 12 K’s – also as a freshman, versus Wright State – went seven innings, however, while Sunday’s 12 strikeouts came in a five-inning contest. The game against Colgate in 2013 was also her only previous one-hitter, but Weissenhofer walked five batters in that contest, while the senior did not surrender a single walk on Sunday.

Weissenhofer struck out eight batters in a row between the first and third innings after inducing a pop-out to open the game. The senior then set down two batters apiece on strikes in the fourth and fifth frames to close out the 12-K performance. The only blemish on Weissenhofer’s scorecard on Sunday came with one out in the fourth, as Anne Yates connected on a pinch-hit single.

All the offense the Crusaders would need came in the top of the first, courtesy of a run-scoring triple from Taylor Nadler (New Haven, Mo./St. Francis Borgia), who later scored on a sacrifice fly by Kaitlyn Ranieri (Schererville, Ind./Lake Central). Valpo added two more runs in the top of the second, as freshman Carly Trepanier (Manteno, Ill./Manteno) connected on her first career homer to make it 4-0 Crusaders.

Valpo then scored six runs in the third to blow the game wide open, all of which came with two outs. A pair of singles and a walk loaded the bases, and junior Taylor Lawson (Tucson, Ariz./Sahuaro) drew a bases-loaded walk to plate Lanie Callaghan (Elburn, Ill./Kaneland) and push the lead to five runs. Sophomore Stephanie Moreno (Murrieta, Calif./Murrieta Valley) followed with a two-run single, and Nadler capped the victory with a three-run homer.

Nadler went 3-for-4 with two runs scored and four RBIs in the run-rule win, leading the way as Valpo banged out 12 hits against the Broncos. Callaghan also posted her first career three-hit game as well. Weissenhofer improved to 2-3 on the season with the win, while McCall James – the first of three pitchers for Santa Clara (5-19) – took the loss to fall to 2-10.

In the tournament finale, the momentum from the Santa Clara win seemed to carry over for the Crusaders, as Valpo scored four runs in the first three innings to take a 4-0 lead. The second inning saw senior Mollie Lindeman (Hebron, Ind./Hebron [PNC]) deliver a sacrifice fly before a run-scoring single from sophomore Jasmine Ramirez (Litchfield Park, Ariz./Millennium) made it 2-0 Valpo. Nadler then connected on her second home run of the day in the top of the third, a two-run shot which doubled the Crusaders’ lead.

But UNLV, which entered the game already with 12 home wins under its belt this year, struck back with a single run in the third and then five runs in the fourth to take a 6-4 advantage. An RBI single from Sam Stewart (Frankfort, Ill./Lincoln-Way East) in the top of the fifth plated Lawson to cut the deficit to 6-5, but the Crusaders would be unable to push any more runs across. UNLV closed out the scoring with a two-run triple in the sixth.

The Crusaders totaled nine hits in the tournament finale against the Rebels, with two apiece coming courtesy of Lawson and Stewart. Sophomore Ashlyn Montgomery (Lebanon, Ind./Lebanon) took the loss for Valpo, falling to 0-2, while Janine Petmecky tossed 4.2 innings in relief for UNLV (14-10) to improve to 1-3 this season.

Valparaiso (3-15) returns home from its spring break trip and has nine days before returning to action on Tuesday, Mar. 22 at Central Michigan.