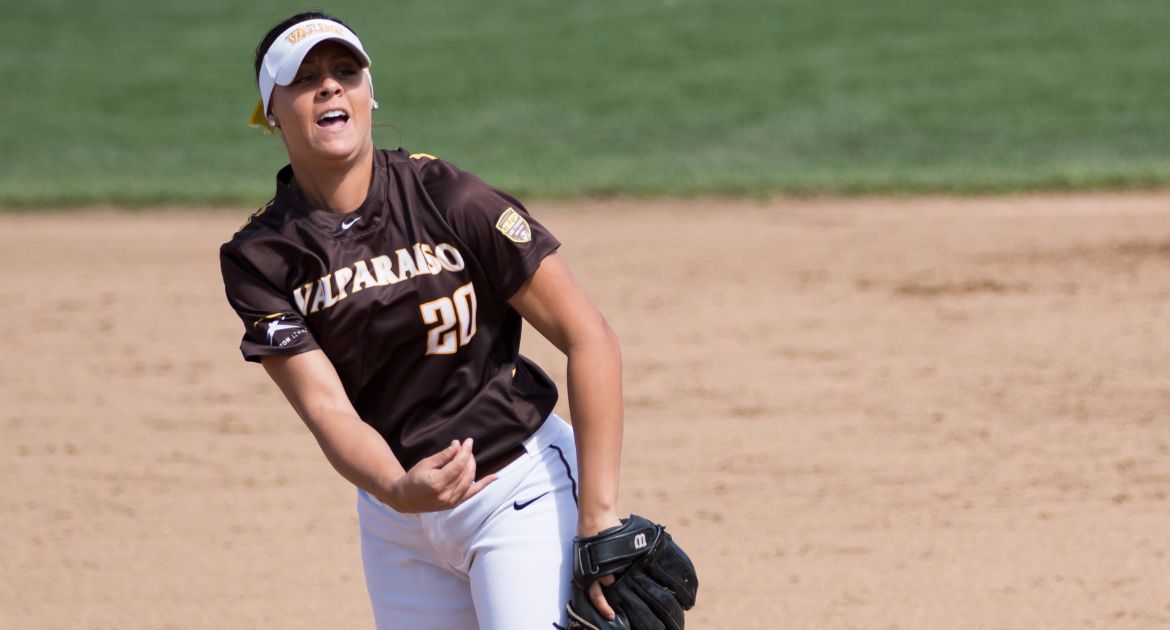 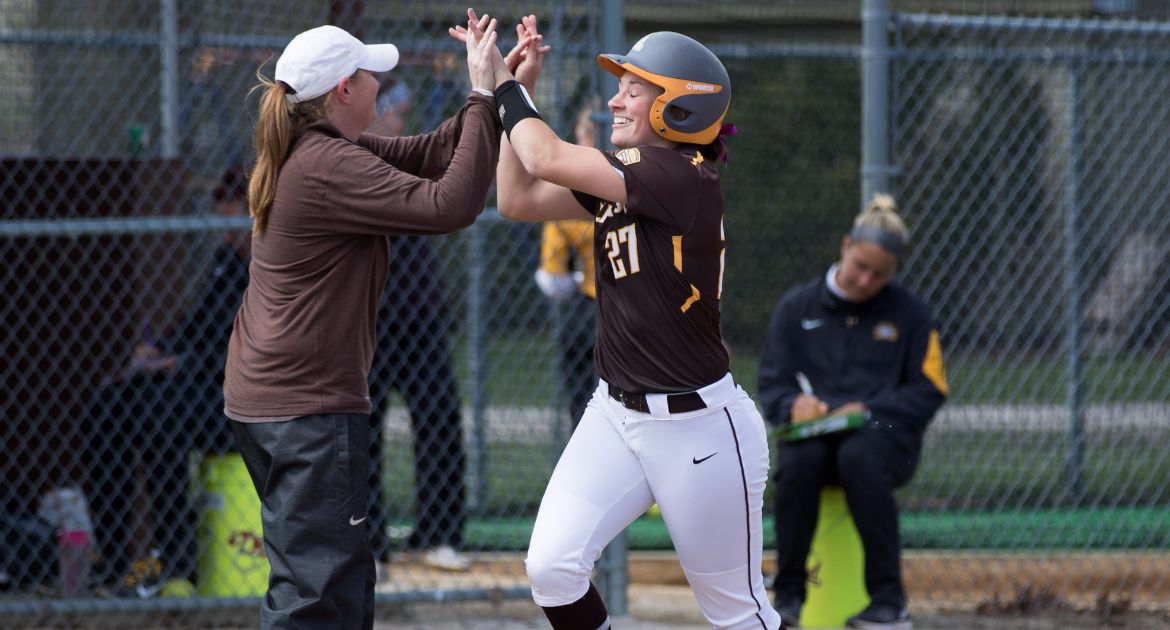 Lanie Callaghan celebrates rounding third base after her home run in the first game Sunday.

The Valparaiso University softball team had to wait almost 48 hours to take the field at home against Northern Kentucky this weekend in Horizon League action, but the Crusaders made up for lost time on Sunday afternoon, shutting out the Norse twice by final scores of 2-0 and 8-0 for the doubleheader sweep. Taylor Weissenhofer (Orland Park, Ill./Lockport Township) tossed her second one-hitter of the season in the nightcap.

Three weeks to the day after her first one-hitter of the year, Weissenhofer nearly went the distance without surrendering a base knock in the Crusaders’ second game of the day. The senior carried the no-hitter into the sixth inning, thanks in part to some great plays  from the defense behind her, before Jordan Harbacek took an 0-2 pitch back up the middle for a clean single. Weissenhofer settled for the one-hitter, striking out seven NKU batters.

Meanwhile, senior Mollie Lindeman (Hebron, Ind./Hebron [PNC]) was nearly as stellar in the opener to earn the first shutout win of her career. Lindeman gave up just four hits, only one of them of the extra-base variety, and only one walk while striking out six hitters. No NKU player even made it to third base against Lindeman as the senior needed just 88 pitches to shut out the Norse.

“We’re getting complete-game performances from our pitchers right now, which is where we need to be at this point of the season,” said Crusader head coach Kate Stake. “I think the one-hitter is a testament to our pitching staff and our defense – we had a couple really solid plays out on the field that prevented hits, which ultimately prevented runs.”

Valpo looked poised to take the lead early in the opener, as Taylor Lawson (Tucson, Ariz./Sahuaro) led off the bottom of the first with a triple to deep center. She would be stranded there, but the Crusaders would eventually take the lead in the second inning. Sophomore Lanie Callaghan (Elburn, Ill./Kaneland) squared up the first pitch she saw and lined a shot over the left-field fence for her second home run of the season, a solo shot to give Valpo a 1-0 lead.

The Crusaders had numerous other chances during the game to add to their lead, but went 0-for-9 in their first nine chances with runners in scoring position. On its 10th chance, however, Valpo pushed another run across the plate, coming in the bottom of the sixth. Senior Sierra Pico (Las Vegas, Nev./Legacy) and Callaghan tallied back-to-back one-out singles, and two batters later, freshman Carly Trepanier (Manteno, Ill./Manteno) dropped a single into shallow left to score Pico with an insurance run. Lindeman set down the Norse in order in the seventh to close out the win.

Lindeman improved to 2-4 with the win, while Harbacek took the complete-game loss for NKU, falling to 5-6. Callaghan enjoyed the best game of her career at the plate, going 3-for-3 with a double in addition to the aforementioned homer and single, while Trepanier and Lawson each tallied two hits as well.

Valpo took the lead in its first turn at-bat in the nightcap, doing all its work with two outs. Sophomore Taylor Nadler (New Haven, Mo./St. Francis Borgia) and Callaghan both drew full-count walks, the latter bringing senior Kaitlyn Ranieri (Schererville, Ind./Lake Central) to the plate. On a 1-1 count, Ranieri drove a no-doubt homer over the left-center fence, giving the Crusaders an early 3-0 advantage.

With the bases loaded and one out in the second, Nadler brought home another run, lining a sacrifice fly to medium-deep right field – more than enough to score junior Jorgi Calombaris (Frankfort, Ill./Lincoln-Way East) and make it 4-0 Crusaders. NKU’s best shot at putting runs across the plate came in the third, as the Norse drew back-to-back one-out walks and both runners advanced into scoring position on a groundout. But Weissenhofer got Dani Devlin swinging at a 2-2 pitch for a strikeout, keeping the Norse off the board.

Nadler delivered her second RBI of the game in the bottom of the fourth, plating Lawson with the third of three consecutive Valpo singles to push the lead to 5-0. The Crusaders then closed out the game via run rule in the sixth, highlighted by sophomore Brenna Boyle (St. John, Ind./Andrean) connecting for a two-run, pinch-hit home run down the left-field line. Ranieri followed with a walk and eventually came around to score the game-deciding run on an infield single from Trepanier.

Weissenhofer improved to 4-6 on the year with the one-hit win, while Alyssa Enrique fell to 0-2 for Northern Kentucky (8-23, 1-4 Horizon) as she surrendered the three first-inning runs before being replaced to start the second. Lawson and sophomore Stephanie Moreno (Murrieta, Calif./Murrieta Valley) each had two hits to lead the 11-hit Crusader attack, while Lawson and Ranieri both scored a pair of runs. The defense also shone, as Ranieri had a diving catch to start off the top of the second, Trepanier had a nice scoop and glove flip on a grounder with one out in the fifth and Lawson crashed into the fence making a catch to end the sixth.

“We made good adjustments at the plate from the first game to the second game,” said Stake. “We were more aggressive, swung with more confidence, and hit significantly better with runners in scoring position.”

Valparaiso (7-20, 2-3 Horizon) stays home this week, as the Crusaders’ scheduled Horizon League series at Green Bay got moved to the Valparaiso University Softball Field. The three-game set will start with a Tuesday twinbill at noon.