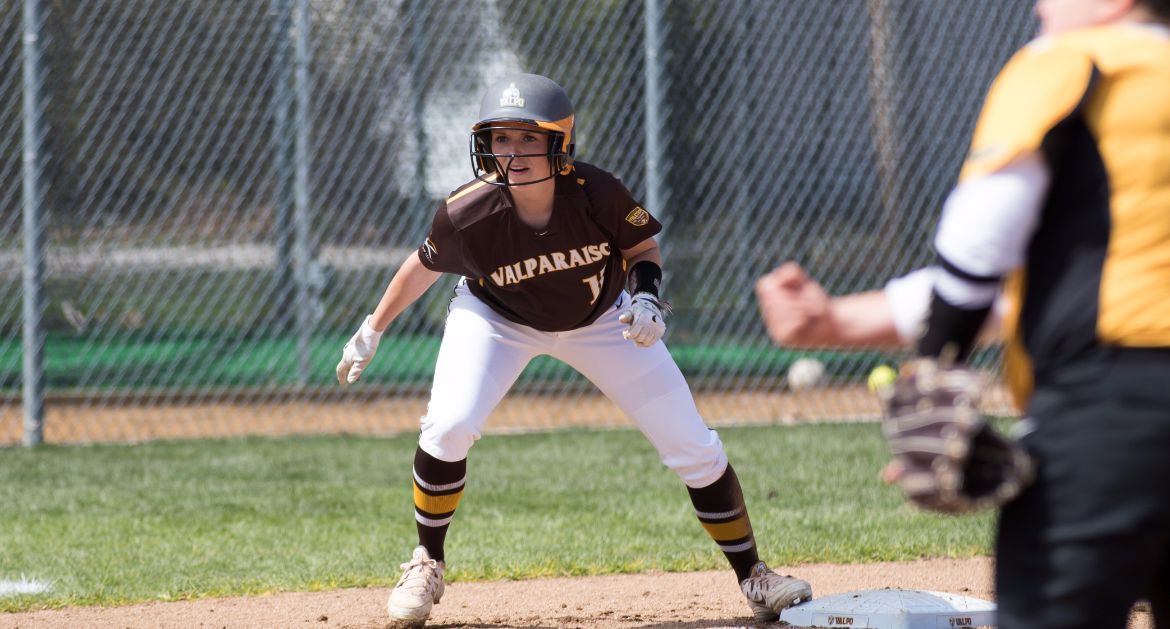 Next Up in Crusader Softball: Surprise home games are on the docket for the Valparaiso University softball team this week, as late winter weather has left Green Bay's field unplayable and forced the mid-week series between the Crusaders and the Phoenix to be moved to Valpo. The Crusaders will play host to a Tuesday doubleheader, followed by a single game on Wednesday - both days featuring noon start times.

Previously: The return to the home field looked good on the Crusaders last week, as Valpo went a perfect 4-0. A sweep of Bowling Green in non-league action opened the week, and then after sitting through two days of postponements, the Crusaders finally retook the field in league play versus Northern Kentucky on Sunday and posted a pair of shutout wins.

Following the Crusaders: All three games this week are slated to have live stats and live audio broadcasts, with links to all available at ValpoAthletics.com. Numerous Valpo games are slated for broadcast on ESPN3.com this spring, including most scheduled home games and a number of road Horizon League contests.

Head Coach Kate Stake: Kate Stake was hired as head coach of the Valparaiso softball program on July 23, 2014 and is in her second season as head coach, owning 23 victories. Stake arrived at Valpo with eight seasons of assistant coaching experience at the Division I level, most recently serving as an assistant at mid-major power Hofstra.

Series Notes: Green Bay owns a 24-16 advantage in the all-time series over the Crusaders, but Valpo holds a 14-11 edge in the series since joining the Horizon League prior to the 2008 campaign. Last season, the two squads squared off for a three-game set at Valpo, with the Phoenix claiming 7-2 and 12-7 wins to bookend the series while Valpo earned a 10-2 victory in the middle game.

Looking Ahead: The Crusaders' bye on the Horizon League schedule comes this weekend, as Valpo will return to action in leauge play with a three-game mid-week series at UIC next week.

Scouting the Opposition: Green Bay owns a 9-22 overall record this year and has yet to play a home game, going just 1-9 in true road games. The Phoenix were swept in its Horizon League-opening series at Wright State Mar. 25-26. Allie Taylor and Abby Brinkmeier are both hitting over .300, but Green Bay is hitting just .242 as a team to date. Bailey Smaney has seen the most action in the circle, pitching 73.1 innings and entering this week's series with a 5-6 record and a 4.39 ERA.

Loving the Home Field: The return back to Valpo for games suited the Crusaders last week, as Valpo went 4-0 at home. The wins extended the Crusaders' home winning streak to eight consecutive games dating back to last year, tied for the nation's eighth-longest home win streak. Valpo has finished at .500 or better at home in every season since 2009.

Shutting Out Opponents: It's tough to lose games when your opponents don't score any runs, and the Crusaders closed out last week by allowing exactly that. Valpo won the nightcap against Bowling Green by shutout and followed up by surrendering zero runs in a doubleheader sweep of Northern Kentucky. It marked the Crusaders' first string of three consecutive shutouts since a three-game shutout sweep of Detroit on Apr. 5-6, 2014, while with a shutout of Green Bay in Tuesday's opener, it would be the first time Valpo posted four straight shutouts since Mar. 24-31, 2010.

Weissenhofer Claims Weekly Honor: For the second time this year, senior Taylor Weissenhofer was named the Horizon League Pitcher of the Week - this time after recording shutouts against both Bowling Green and Northern Kentucky last week. Weissenhofer surrendered just three hits and struck out eight in the shutout of BGSU, and followed with her second one-hitter of the season, posting seven strikeouts, against NKU. The senior, who previously was named HL Pitcher of the Week Mar. 14, didn't give up an extra-base hit in either game and allowed just one runner past second base.

Lindeman Strong in the Circle: Senior Mollie Lindeman has also been putting together some stellar pitching performances for the Crusaders since their return to the Midwest. Since the end of the spring break trip, Lindeman has pitched 31 innings, earned a pair of wins and posted a 2.26 ERA, allowing opponents to hit just .235 off of her. Last week, she earned the complete-game win in the opener against Bowling Green and then followed with a four-hit shutout of Northern Kentucky as she didn't allow a runner past second base against the Norse. The shutout was Lindeman's first since a blanking of Detroit on Apr. 6, 2014.

Hitters Raking Last Week: While the pitching was the highlight of last week's four wins, the Crusader hitters raked as well at the plate, combining to hit .340 and slug .530 in the quartet of victories. Sophomore Lanie Callaghan (5-for-10, 4 R, 2B, HR, 2 RBI) and junior Jorgi Calombaris (5-for-10, 2 R, 2 2B) both hit .500 to lead the way, while junior Taylor Lawson was strong as well atop the batting order, hitting 5-of-13 (.385) with three runs scored, a triple, two walks and four stolen bases.

New Records This Year: A pair of Crusader seniors have set new Valpo career records already this year. In the circle, Taylor Weissenhofer broke Valpo's career strikeouts record in the Crusaders' third game of the year - Feb. 13 versus St. John's - and now owns 503 career K's. At the plate, Kaitlyn Ranieri drew a walk in her first plate appearance of the year to set a new Valpo career record in that category and currently has 110 career walks.

Moving Up the Charts: While Ranieri already tops the career walks chart, she is poised to advance on a number of other career charts in the coming weeks. The senior is currently third in Crusader history in doubles (43, two shy of second), third in hits (207), tied for third in total bases (325), fourth in home runs (23, two shy of third), fourth in runs scored (124) and fourth in RBIs (102, five shy of third).