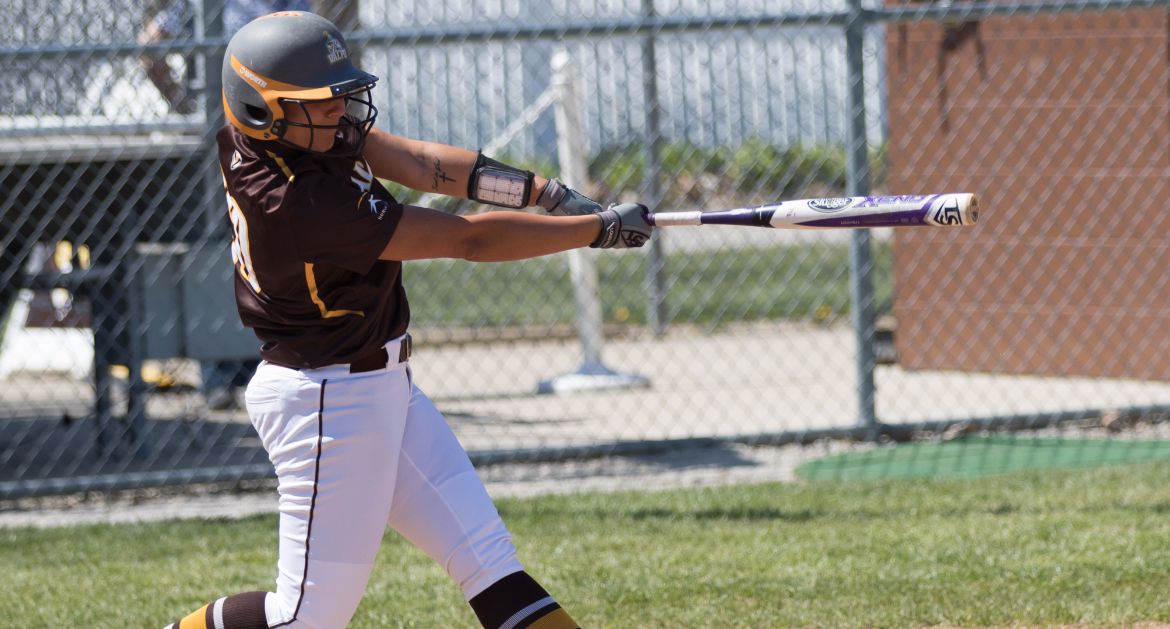 The Valparaiso University softball team received key plays both in the circle and at the plate from senior Mollie Lindeman (Hebron, Ind./Hebron [PNC]) late in the opener of a Horizon League doubleheader against Cleveland State Saturday in Valpo, as the Crusaders claimed the twinbill’s first game, 2-1. The Crusaders’ repeated attempts at rallying in the nightcap were thwarted by the Vikings, as CSU emerged with a 10-7 win.

It was a rough start in the opening inning of the first game, as senior Taylor Weissenhofer (Orland Park, Ill./Lockport Township) walked four batters in the first frame – the last of which forced home the game’s first run. But Weissenhofer induced a line-out to limit the Vikings to just one first-inning run, and then faced the minimum in each of the next three innings.

Meanwhile, the Crusaders got a runner into scoring position in each of the first three innings, but couldn’t advance any of their runners past second base. Valpo finally broke through in the fourth frame, however. Sophomore Brenna Boyle (St. John, Ind./Andrean) led off the inning with a hard one-hop liner off the third baseman for an infield single, and two batters later, sophomore Jenna Stauffenberg (Kankakee, Ill./Bishop McNamara) battled through a 10-pitch at-bat, sending a shot to deep center field that looked destined to be a two-run homer and give Valpo the lead.

Stauffenberg’s fly hit the top of the fence, though, and took an unfortunate carom for the Crusaders, coming back into the field of play to go down as just a long single, one which advanced Boyle to third. Freshman Carly Trepanier (Manteno, Ill./Manteno) followed with a fly into shallow left which was caught, but the Vikings’ left fielder stumbled as she caught it, allowing Boyle to tag and score on the sacrifice fly to tie the game at 1-1.

CSU drew a pair of two-out walks in the fifth inning, but Weissenhofer escaped the inning as the Vikings’ Susan Knight sent a fly to the warning track in center field. CSU looked destined to claim the lead in the sixth, as a leadoff walk was followed by a double to the fence in left-center, but a pair of perfect relay throws cut down the potential go-ahead run at the plate. Later in the inning, two more walks loaded the bases with two outs, but head coach Kate Stake went to Lindeman from the bullpen and the senior delivered, striking out Alisha Silva to leave the bases loaded and the game tied.

Valpo’s first two batters in the bottom of the sixth went down in order, but a rally eventually produced the game-winning run. Trepanier dropped down a bunt single that couldn’t be bare-handed by the CSU third baseman to reach, and senior Kaitlyn Ranieri (Schererville, Ind./Lake Central) followed by lining a single straight up the middle to put two runners aboard. Stake flexed Lindeman into the batting order to hit, and once again Lindeman came up big, turning on a pitch and lining a ball off the third-base bag for a run-scoring double as Trepanier crossed the plate. CSU put two runners on base in the seventh courtesy of a one-out walk and a two-out infield single, but Lindeman registered a strikeout to close out the win.

Lindeman tallied the game’s final four outs to earn the win, while Weissenhofer went the first 5.2 innings in the circle, allowing just one base hit but walking 10 CSU hitters. Mackenzie Joecken took the loss for Cleveland State in the start, falling to 3-6. Ranieri tallied a pair of hits and also walked once in the opener.

Valpo found itself playing from behind immediately in the nightcap, as a trio of walks loaded the bases with two outs for CSU in the first before the Vikings got an RBI single and then a grand slam from Joecken, jumping out to a 5-0 lead before the Crusaders came to bat. CSU added an unearned run in the third as well to push the lead to six.

The Crusaders cut the lead in half as they started to rally in the bottom of the fifth. Senior Mackenzie Buchelt (Lisle, Ill./Lisle) opened the inning by drawing a full-count walk, and two batters later, senior Sierra Pico (Las Vegas, Nev./Legacy) pinch hit and doubled to the fence in left-center field, plating Buchelt with Valpo’s first run of the game. Two batters later, Ranieri stepped in and went the opposite way for her fifth homer of the season, driving a full-count offering over the left-field fence to make it a 6-3 game.

CSU added two runs to its lead in the top of the sixth, but Valpo batted around in its half of the inning to again put the pressure on the Vikings. Following back-to-back singles to lead off the inning by sophomore Lanie Callaghan (Elburn, Ill./Kaneland) and Lindeman, sophomore Jasmine Ramirez (Litchfield Park, Ariz./Millennium) pinch hit and delivered a run-scoring double.

After a pitching change, Buchelt dropped a sun-aided single into shallow right field to plate Lindeman and cut the deficit to 8-5. Two batters later, Pico delivered a sacrifice fly to make it a two-run game, and after Valpo loaded the bases on a Trepanier single and a Ranieri walk, junior Taylor Lawson (Tucson, Ariz./Sahuaro) drew a nine-pitch walk to score another run. But a fly-out left the Crusaders trailing by one run entering the seventh inning, and after CSU added two insurance runs, Valpo went down in order in the bottom of the seventh.

Lindeman took the loss for Valpo, falling to 4-7 on the year after earning both of the day’s decisions, while sophomore Ashlyn Montgomery (Lebanon, Ind./Lebanon) tossed 4.2 innings in relief and surrendered just two earned runs. Starter Macy Kaisk earned the win for Cleveland State (11-26, 4-8 Horizon) as she went five-plus innings to improve to 4-7, and Susan Knight earned her first save of the year with a perfect seventh inning. Trepanier posted Valpo’s only multi-hit game in the nightcap, while Ranieri, Buchelt and Callaghan all reached base twice as well.

Valparaiso (9-26, 4-9 Horizon) steps out of league play this week for a single non-league game at #19/20 Notre Dame Wednesday evening. First pitch is slated for 5 p.m. CT, and all the action can be heard live on WVUR (95.1 FM, Valparaiso). Links for live audio and stats will be available via ValpoAthletics.com.