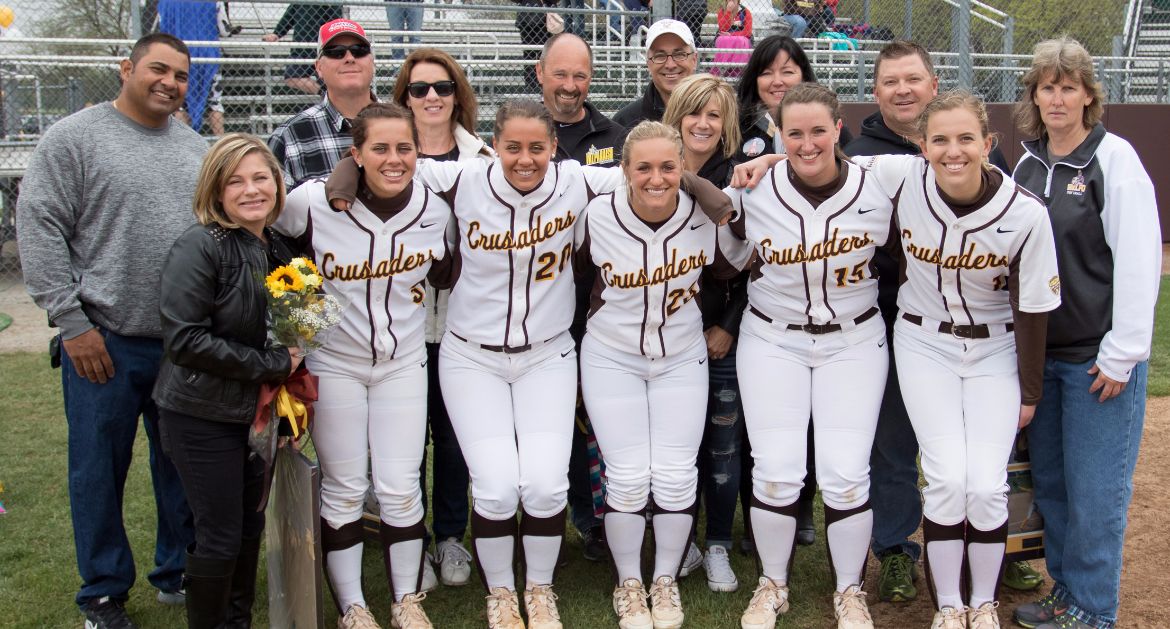 The Crusader seniors and their parents prior to Friday's victory.
Oakland at Valparaiso | April 29, 2016
Related Links
Related Links

It was a dramatic Senior Day for the Valparaiso University softball tea m, as it took until the 11th inning to determine a winner between the Crusaders and Oakland. But in the end, it was a senior who delivered the game-winning blow, as Kaitlyn Ranieri (Schererville, Ind./Lake Central) knocked a single back through the middle to score freshman Carly Trepanier (Manteno, Ill./Manteno) and give Valpo a 3-2 walk-off win over the Golden Grizzlies.

“It's nice to see the seniors come out with a victory on Senior Day today,” said Crusader head coach Kate Stake “Senior Day is always an emotional celebration, and to see one senior lead the way in the circle throughout the game and another seal the deal and finish the game with her bat was a good way to cap the day for the group.”

The bottom of the 11th got going with one out, as Trepanier knocked a single straight back from where it came, into center field – her third hit of the game. Junior Taylor Lawson (Tucson, Ariz./Sahuaro) followed with a slap back to the circle, but Haley Zemmer’s throw to try to force Trepanier at second was low and unable to be dug out of the dirt as everybody was safe. Following a sacrifice bunt, Ranieri stepped up and delivered the walk-off win, lining a 1-2 pitch back through the middle for the game-winning RBI.

The walk-off win was even more dramatic following the top of that very same inning. Oakland entered the 11th inning with just four base hits on the game, but started off the frame with three consecutive singles to load the bases with nobody out. In her 11th inning of work, the senior Weissenhofer gathered herself in the circle and struck out each of the next two batters. Then, facing a perennial All-League candidate in Sarah Hartley, Weissenhofer induced a grounder to third base, where Jorgi Calombaris (Frankfort, Ill./Lincoln-Way East) stepped on third for the force to leave the bases loaded.

That would be the very last pitch Weissenhofer had to throw in earning the win on Senior Day, as she went the distance, tossing 161 pitches over 11 innings. She scattered seven hits and five walks while giving up just the pair of runs and struck out a season-best 14 batters – the second-best effort of her career in the category. In making the start, Weissenhofer appeared for Valpo in the circle for the 140th time, establishing a new career record for pitching appearances at Valpo.

The only blemish against Weissenhofer came in the top of the fourth, as Oakland put a runner into scoring position for the first time in the game with one out, and Danielle Szajna followed with a two-run homer – the Golden Grizzlies’ first hit of the game. But after leaving six runners on base in the first four innings, the Crusaders got a clutch hit in the fifth. Trepanier and Lawson tallied back-to-back singles to lead off the inning, and with two outs, junior Sam Stewart (Frankfort, Ill./Lincoln-Way East) stepped in and lined a 1-1 pitch up the middle into right-center, scoring the speedy Lawson all the way from first to tie the game.

Both teams had shots at the potential winning run in the seventh inning. Oakland put runners on first and second with one out, but Weissenhofer recorded another strikeout and then got a pop-out to end the threat. Lawson slapped a single the other way with one out in Valpo’s half of the seventh and then stole second base, but was stranded there as the game entered extra innings.

Both Oakland and Valpo had chances in extra innings as well before the Crusaders closed out the victory. The Golden Grizzlies’ best opportunity came in the ninth inning, as a leadoff single and a one-out walk both advanced 60 feet on a sacrifice bunt. But with two outs, another Weissenhofer strikeout kept Oakland off the board.

Meanwhile, a couple big defensive plays from Oakland kept the Crusaders from scoring. With a runner on first and two away in the eighth, Calombaris sent a liner into right-center field that Oakland center fielder Abbey Walewski made a diving catch on – a ball which was destined for the wall if it wasn’t caught. Then, following a two-base error to start off the bottom of the ninth, a Trepanier fly ball into shallow left was grabbed thanks to a sliding effort from left fielder Mikayela Marciniak. Back-to-back two-out singles in the bottom of the 10th gave Valpo a chance for the walk-off win, but a grounder up the middle was gobbled up – just setting the stage for the walk-off heroics in the 11th.

Oakland (11-26, 6-9 Horizon) got a complete-game effort from its pitcher as well, as Zemmer went the distance in the circle, giving up 11 hits and four walks while striking out three hitters in the losing effort. Moreno and Trepanier each tallied three base hits to lead Valpo’s 11-hit attack, while the latter drew a walk and scored two runs as well.

Valparaiso (12-29, 6-11 Horizon) looks to close out its series with the Golden Grizzlies with a 1 p.m. doubleheader on Saturday. With inclement weather in the forecast, ValpoAthletics.com and the Valpo Softball Twitter account (@ValpoSoftball) will have any updates on game time. When the games are played, they will be broadcast on ESPN3 and have live stats available as well.