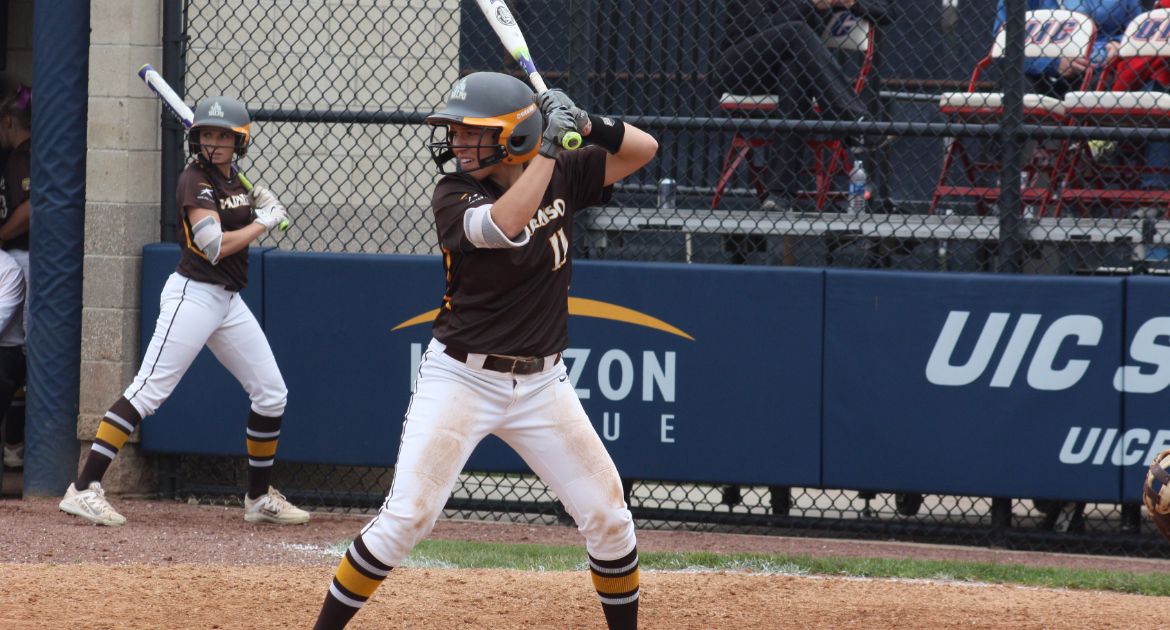 Carly Trepanier went 3-for-4 with a pair of RBIs in Wednesday's win. (Jamie Hall)
Valparaiso at Youngstown State | May 11, 2016

The Valparaiso University softball team put together one of its most impressive offensive outputs of the season on Wednesday in its opener at the 2016 Horizon League Championship, as the sixth-seeded Crusaders took down third-seeded Youngstown State by a 10-6 final in Chicago. With the win, Valpo advances to face Wright State Thursday afternoon at 2:30 p.m.

The Crusaders’ 10 runs matched the second-most they’ve scored in a game this season, while they also drew seven walks – tied for second-most by the team in a game this year – and rapped out 11 hits – their sixth double-digit output in the category in the last nine games. The offensive production Wednesday came against a Youngstown State team which Valpo had tallied just one run on 10 hits in three games against during the regular season.

YSU opened the game on top thanks to a solo homer in the bottom of the first, but the Crusaders answered with two runs in their next turn at-bat. After sophomore Taylor Nadler (New Haven, Mo./St. Francis Borgia) led off with a walk and moved to second on a sacrifice by junior Jorgi Calombaris (Frankfort, Ill./Lincoln-Way East), sophomore Stephanie Moreno (Murrieta, Calif./Murrieta Valley) dropped down a perfect bunt single to put runners on the corners with one away.

“I thought Jorgi’s sacrifice bunt was exactly what we needed early on in the game,” said Crusader head coach Kate Stake. “She executed perfectly what we wanted to have her do, and it resulted in a two-run inning for us. It was one of those things which might get overlooked sometimes, but which are critical to execute in order to win games come tournament time.”

Sophomore Lanie Callaghan (Elburn, Ill./Kaneland) worked a full count before chopping a single back through the middle to plate Nadler and tie the game, and freshman Carly Trepanier (Manteno, Ill./Manteno) followed by lining a shot off the YSU third baseman – a liner which ricocheted down the left-field line, allowing Moreno to score all the way from second. Valpo added another run to its lead in the third, as Nadler reached on a YSU error and came around to score when Calombaris sent a single back up the middle.

The Penguins evened the score at 3-3 in the bottom of the third on a solo homer and a run-scoring double, but the Crusaders got both runs back in the fourth inning. A pair of singles and an error by the Penguins loaded the bases with nobody out, and Valpo would plate two courtesy of a full-count walk worked by junior Taylor Lawson (Tucson, Ariz./Sahuaro) and a single into shallow right field from junior Sam Stewart (Frankfort, Ill./Lincoln-Way East) to make it a 5-3 lead.

The lead remained at two runs into the sixth inning, when the Crusaders added what looked to be a key insurance tally. Trepanier drew a one-out walk and was replaced on a fielder’s choice by Lawson. The speedster swiped second on the first pitch for her 22nd steal of the year, advancing to third on a YSU error as the catcher’s throw hit Lawson as she slid into second. Stewart did the rest, knocking a single through the middle of the infield to score Lawson and push the advantage to 6-3.

“Taylor can change a game for us with her speed, and she came up huge for us in the sixth,” said Stake. “She has the green light to go whenever she feels like she can steal, and did a great job not just stealing the base, but also having the awareness to realize she could take third and put herself in a better position to score.”

YSU rallied in its half of the sixth, loading the bases on a trio of singles with just one out. A walk cut the lead to two runs, and following an 11-pitch battle at the plate, a sacrifice fly made it a 6-5 ballgame. But with the potential tying and go-ahead runners in scoring position, senior Taylor Weissenhofer (Orland Park, Ill./Lockport Township) got perhaps the most critical out of the game, inducing a fly-out to center from YSU leadoff hitter Sarah Dowd to maintain the one-run lead into the seventh.

The Crusaders had one last big inning left in them, however, utilizing their patience to put themselves in position to put up a crooked number. Two walks and a hit batter loaded the bases with one out in the seventh, and Callaghan sent a shot to center field which looked like it might be a grand slam. The sophomore would come up just short of the home run, however, as the ball hit off the wall, and with the Crusader runners having to hold in case it was caught, it turned out to be just a long single – each runner advancing just 60 feet as the lead grew to 7-5.

But the top of the Valpo order made sure those runs would cross the plate regardless. Trepanier sent a softly-hit grounder to short, and when the shortstop hesitated slightly before throwing to first, the freshman beat it out for an RBI infield single. Lawson followed by dropping a slap single into shallow left field to plate the Crusaders’ ninth run, and Stewart backed that up with a four-pitch walk to cap the scoring for Valpo. Weissenhofer dealt around a pair of YSU hits in the bottom of the seventh, as the Crusaders turned a double play on a fly ball to close out the victory.

“Taylor got stronger in the circle to get the final out of that sixth inning and carried that over into the seventh inning,” said Stake. “I thought she did a good job in that final inning of not letting a couple of hits deter her from finishing out the game strong.”

Making her first appearance in the league tournament, Trepanier tallied a team-high three hits, going 3-for-4 with a walk and two RBIs. Callaghan (2-for-3, two runs, two RBIs) and Stewart (2-for-3, three RBIs) each had multi-hit games as well, while Nadler and Moreno both crossed home plate twice. Weissenhofer earned the complete-game win for the Crusaders to improve to 8-12, while Youngstown State (29-20) starter Paige Geanangel took the loss, falling to 16-11 as she threw the first three-plus innings.

Valparaiso (15-32) moves on to face second-seeded Wright State at 2:30 p.m. Thursday afternoon. The game can be seen live on ESPN3, with links for the live video and live stats available via ValpoAthletics.com.