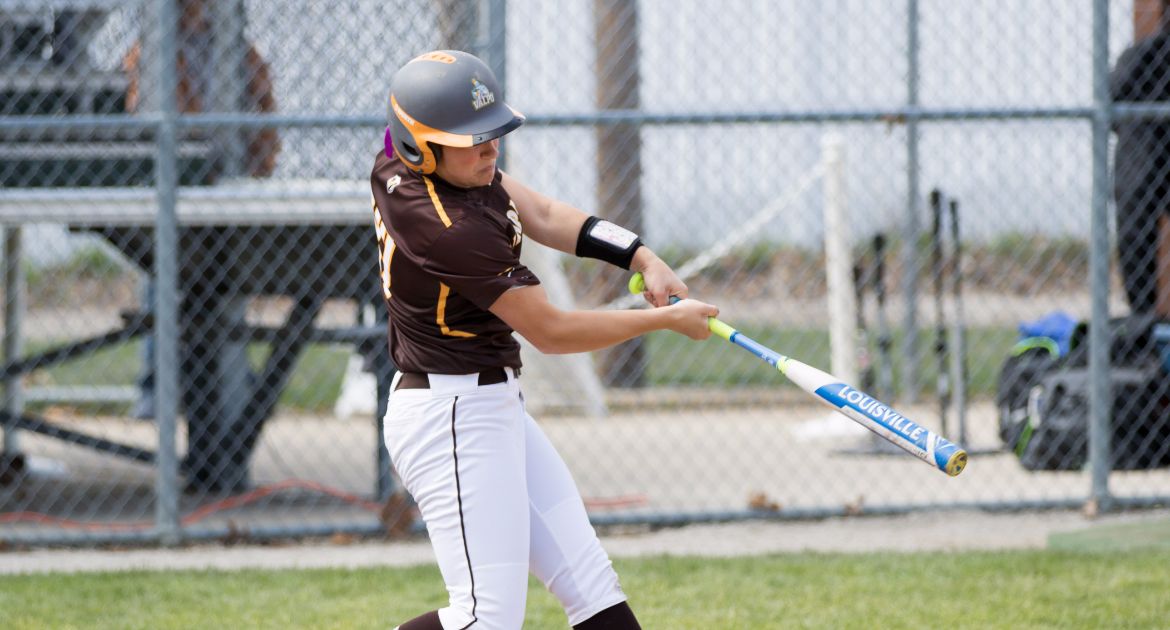 Lanie Callaghan delivered the big blast in the second inning Thursday.
Valparaiso at Wright State | May 12, 2016

One swing of the bat proved to be all the Valparaiso University softball team would need on Thursday afternoon as action continued at the Horizon League Championship, as sophomore Lanie Callaghan (Elburn, Ill./Kaneland) delivered on a second-inning grand slam and senior Taylor Weissenhofer (Orland Park, Ill./Lockport Township) made it stand up with a stellar pitching performance in a 4-0 victory over second-seeded Wright State in Chicago. With the win, the Crusaders advance to take on top-seeded UIC Friday afternoon.

After both teams left a runner in scoring position in the first, the Crusaders put together their four-run outburst in the top of the second. Sophomore Taylor Nadler (New Haven, Mo./St. Francis Borgia) led off by watching five pitches go by, four of which were balls for a leadoff walk. Junior Jorgi Calombaris (Frankfort, Ill./Lincoln-Way East) followed with a sacrifice bunt attempt, and the Raiders’ third baseman’s attempt to erase the lead runner in Nadler was errant to put two on with nobody out.

Sophomore Stephanie Moreno (Murrieta, Calif./Murrieta Valley) turned on a pitch and dropped it into shallow left field, just inside the foul line, for a single to load the bases. Two batters later, Callaghan stepped in and worked the count full before getting all of Ashley Sharp’s next offering, drilling it over the wall in left-center for the first grand slam of her career as the Crusaders claimed the 4-0 lead.

“Lanie’s not in the nine-hole for us because she’s our ninth-best hitter,” said Crusader head coach Kate Stake. “She does a good job of turning our lineup over, and as has been the case in each of our first two games this week, she also gives us a hitter who can produce runs when hitters in the bottom half of our order get on ahead of her. She’s had some very good swings at the plate so far in the tournament.”

Valpo would not add to its lead the remainder of the game, leaving a pair of runners on in both the fifth and sixth innings, but the work of Weissenhofer in the circle meant that a four-run advantage was more than enough. Wright State’s best threat might have come in the bottom of the second, immediately following the big blow from Callaghan, as the Raiders put runners on second and third with just one out. But Weissenhofer got a big strikeout for the second out and then induced a looping liner to escape the threat.

After a leadoff walk in the third, Weissenhofer set down the next 11 Raider hitters in order before suffering a scare, as Becka Peterson lined a shot off of the senior in the circle with two outs in the sixth inning. Weissenhofer shook it off, however, and after giving up a bloop single to put two runners on, got a pop-out to send the game to the seventh inning. WSU put the first two hitters on in the bottom of the seventh courtesy of a walk and a single to shallow right-center, but a fly ball to center got one out and the Crusaders followed by turning a double play on a line drive to close out the shutout win.

“Taylor got hit square by a shot there in the sixth inning - forget the physical recovery, it takes some real fortitude to step back in the circle and continue going after the hitters,” said Stake. “But she bounced back well and closed out the game strong for us. She did a very good job today of limiting free passes and preventing many hard-hit balls, and was great the few times she faced adversity with runners in scoring position.”

Callaghan followed up her two-hit performance from Wednesday with another two-hit game against the Raiders, while Nadler reached in all three of her plate appearances with two hits and a walk. Weissenhofer scattered five hits and two walks while striking out sixth as she picked up her fifth shutout of the season, improving to 9-12, while Sharp took the loss for Wright State (35-22), falling to 19-7.

Valparaiso (16-32) continues tournament action in the winner’s bracket on Friday afternoon, as the Crusaders take on top seed and host UIC. As with all tournament games, the game can be seen live on ESPN3, with links for the live video and live stats available via ValpoAthletics.com.

“As a team, we’re playing confident softball right now,” said Stake. “We’re playing together, and having fun while doing so – that can be a dangerous combination at this time of year.”