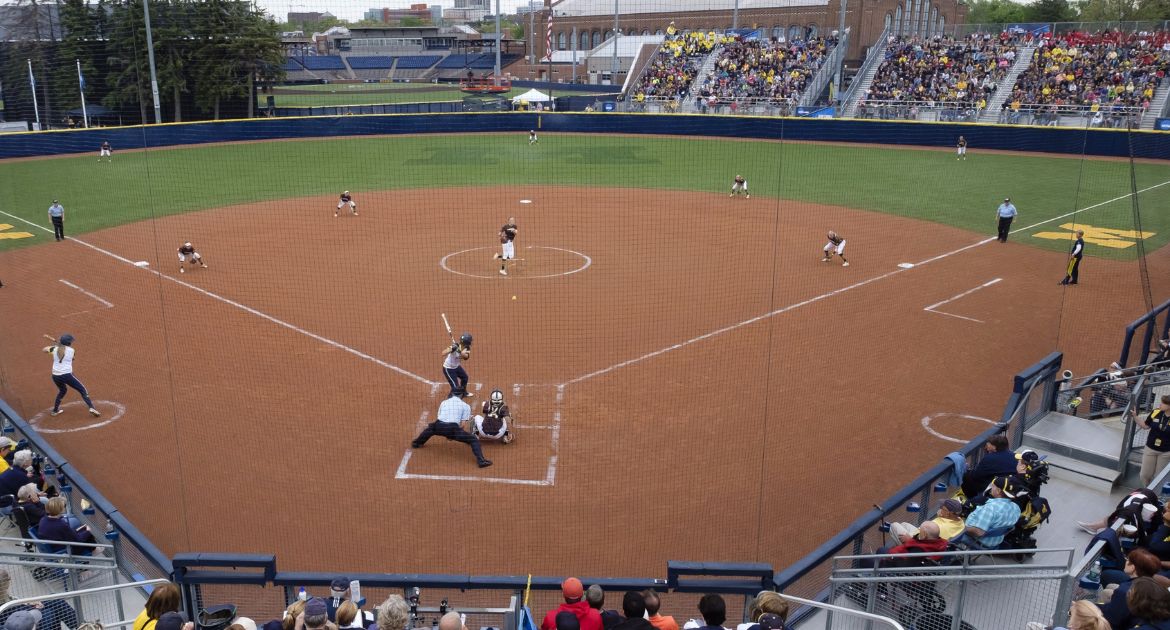 The Crusaders on the field defensively in the 2nd inning Friday. (Rick Osentoski)
Valparaiso at #2 Michigan | May 20, 2016

Making its third NCAA Tournament appearance in the last five seasons, the Valparaiso University softball team battled with #2 Michigan in Ann Arbor Friday night, but the Wolverines pushed across five runs in the fifth inning in sending the Crusaders to an 8-0 defeat. With the loss, Valpo will take on #23 Notre Dame in an elimination game on Saturday afternoon at 1:30 p.m. CT.

“I thought we competed well today,” said Crusader head coach Kate Stake. “We didn’t come into the game intimidated and we made Michigan work for what they got.”

Michigan opened the scoring in the bottom of the first, as Sierra Romero connected on a one-out solo homer – her 18th round-tripper of the season. The Wolverines added a pair of two-out runs in the second on an RBI double from Lindsay Montemarano and a run-scoring single by Abby Ramirez.

But senior Taylor Weissenhofer (Orland Park, Ill./Lockport Township) kept the Wolverines at three runs for the next couple innings. The senior worked around a one-out walk and a two-out hit batter in the third, and then set down Michigan in order in the fourth inning on just four pitches.

Offensively, a leadoff walk from Kaitlyn Ranieri (Schererville, Ind./Lake Central) in the second was the Crusaders’ only baserunner in the first three innings, as Michigan pitcher Megan Betsa struck out seven Valpo hitters the first time through the order. Junior Taylor Lawson (Tucson, Ariz./Sahuaro) tallied Valpo’s lone hit with a slap single in the fourth down the first-base line, but the second time through the order saw only two Crusaders strike out.

“I wish we had gotten the chance to hit in the sixth and seventh innings, because I feel like we were starting to come around on Betsa,” said Stake. “Our second time through the order, our hitters were making good adjustments and seeing the ball better.”

Michigan would close out the game in the fifth inning, scoring a run on four straight singles to open the frame and loading the bases. Freshman Carly Trepanier (Manteno, Ill./Manteno) snagged a Wolverine line drive to register the first out, but Michigan extended the lead to 6-0 with a two-run single, and following a pitching change, three straight batters walked to force across the final two runs.

Weissenhofer took the loss for Valpo as she worked 4.1 innings, falling to 10-13 on the year. Betsa improved to 24-3 for Michigan (47-5) as she went the distance in the circle for the Wolverines.

With the loss, Valparaiso (18-33) finds itself one loss away from elimination in the double-elimination format. The Crusaders will face Notre Dame, which dropped a 3-2 decision to Miami (Ohio) earlier in the day on Friday, in the regional’s first elimination game on Saturday afternoon at 1:30 p.m. CT. The game will be available via BTN2Go, with live stats also available via ValpoAthletics.com. Valpo and Notre Dame faced off earlier this year on April 20 at Notre Dame, a 7-3 win for the Irish.

“We competed well with Notre Dame in the fall, and have some good takeaways from playing them earlier this season as well,” said Stake. “We faced a Michigan team tonight which leads the nation in runs scored and has a pitcher who leads the nation in strikeouts, and so I hope going into tomorrow it’s like a driver getting off the highway and onto local roads – that the game slows down a bit for us when we take the field, compared to today.”