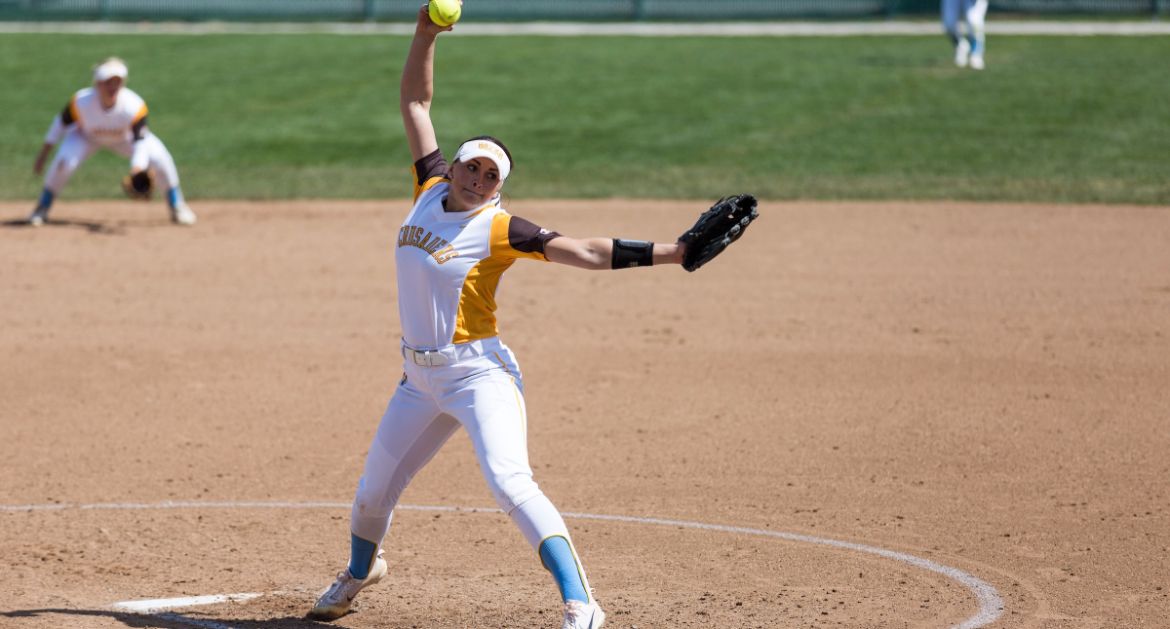 Next Up in Crusader Softball: The Valparaiso University softball team passes the midway point of Horizon League play this week as it faces six games in a five-day stretch. The Crusaders conclude their current homestand with a three-game series versus league-leading UIC at the Valpo Softball Complex on Tuesday and Wednesday, and then travel to take on Cleveland State for a three-game set on Friday and Saturday.

Previously: Valpo claimed a three-game series from Green Bay last week in mid-week action. After dropping the series opener, 4-3, the Crusaders rebounded with 13-2 and 4-0 victories to earn the series win and improve to 6-3 in league play.

Looking Ahead: The Crusaders step out of league play briefly next Tuesday for a doubleheader against Central Michigan before returning to Horizon League action next weekend at Detroit Mercy.

Following the Crusaders: All six games this week are scheduled for live broadcast on ESPN3 and will have live stats as well, while the three home games will also be broadcast by Valpo's student radio station, 95.1 FM, WVUR. Most league home games and select road games throughout the year will be available on ESPN3, WatchESPN and the ESPN app.

Head Coach Kate Stake: Kate Stake was hired as head coach of the Valparaiso softball program on July 23, 2014 and is in her third season as head coach, owning 53 victories. Stake led the Crusaders to the 2016 Horizon League Championship and a berth in the NCAA Tournament - the third in program history. Stake arrived at Valpo with eight seasons of assistant coaching experience at the Division I level, most recently serving as an assistant at mid-major power Hofstra.

Series Notes: UIC - Valpo is just 19-63 all-time versus the Flames, but has performed much better against their Chicago-based foe since joining the Horizon League, as UIC holds just a 16-14 advantage since the Crusaders made the move prior to the 2008 campaign. Interestingly, over the past seven seasons, the Crusaders are just 6-14 versus UIC in the regular season, but own a 6-1 record against the Flames in the Horizon League Championship. True to form, last season saw the Flames sweep three from Valpo in Chicago during the regular season before the Crusaders dealt UIC a setback in the league tournament.

Cleveland State - The Vikings hold a slight 20-18 advantage all-time over Valpo, but since joining the Horizon League, it's been the Crusaders with a 14-13 edge. Valpo was just 1-8 versus CSU in its first three years as a Horizon League member, but is 13-5 against the Vikings over the last six seasons. Last year, CSU took two of three from the Crusaders in Valpo.

Scouting the Opposition: UIC - The Flames enter this week's series at 21-17 overall and atop the Horizon League standings at 8-1 in league action. Lexi Watts leads the UIC offense, hitting .417 with 25 runs scored and 16 stolen bases on the season. Elaine Heflin is the reigning Horizon League Pitcher of the Week following a nine-inning no-hitter with 17 strikeouts last weekend at Youngstown State.

Cleveland State - The Vikings are still in search of their first Horizon League win of the year, as they enter this weekend's action at 0-9 in league play and 4-34 overall. CSU is hitting just .210 as a team, with junior Mackenzie Joecken leading the way, hitting .306 with 17 RBIs. Joecken also owns a 4.86 ERA in the circle and has thrown a team-high 76.1 innings.

Winning Series: The Crusaders earned the series win over the Phoenix with a 4-0 win last Wednesday, marking the third consecutive league series Valpo has won the rubber game in after splitting the first two contests. It marks the first time the Crusaders have won three or more straight league series to open league play since the 2012 squad won each of its first four Horizon League series en route to a regular season title.

One With Offense, One With Pitching: The pair of the wins over the Phoenix could not have come in more different fashion for the Crusaders. Tuesday's nightcap win saw Valpo rap out a season-best 17 hits and match its season high with 13 runs scored in the 13-2 victory. Then on Wednesday, the Crusaders tallied just four hits, but that would be all the offense they needed, as Kenzie Grossmann tossed a complete-game shutout. The shutout was the first for Valpo since the season opener at North Carolina A&T.

Just Win, Baby, Win: Kenzie Grossmann has been on top of her game in the circle when handed the starting assignment over the last two weeks for the Crusaders. Grossmann has won each of her last five starts to improve her record to 12-5 on the year and leads the Horizon League in victories. Over those five starts, Grossmann has tossed four complete games and posted a 1.73 ERA. The five straight wins marks the most consecutive starts won by a Valpo pitcher since Sam McGee earned victories in seven straight starts March 16-April 15, 2012.

Calombaris Stays Hot: Through 16 games this season, senior Jorgi Calombaris was hitting just .208 at the plate with two doubles, one homer and four RBIs. But over the last 13 games, Calombaris' fortunes at bat have flipped 180 degrees, as she is hitting .429 in that stretch with three doubles, three home runs and 12 RBIs. By going 18-for-42 over the Crusaders' last 13 games, Calombaris has raised her season batting average more than 100 points up to .311. Last week saw the senior lead the way for Valpo, as she went 5-for-7 with two homers, four runs scored and four RBIs in the series win over Green Bay.

Stewart Continues to Reach: Senior Sam Stewart broke Valpo's program record for consecutive games reaching base in the series finale against Youngstown State, surpassing Sara Strickland's mark of 24 straight games from the 2011 campaign. But Stewart has not let up, as she extended her record out to 28 games last week by reaching in all three games against Green Bay. Stewart went 3-for-6 with four walks in the series against the Phoenix, pushing her season on-base percentage up to .533.

Nearing the Century Mark: With her next run driven in, Stewart will become just the sixth player in Valpo program history to reach 100 career RBIs, one of a number of career charts she's moving up during the second half of her final season. The grand slam in game two against Green Bay was the 23rd home run of her career, fifth-most in program history, while she has drawn 63 walks, eighth-most in program history and just one shy of sixth position. Stewart also currently ranks sixth in career slugging percentage (.512) and eighth in career on-base percentage (.382).