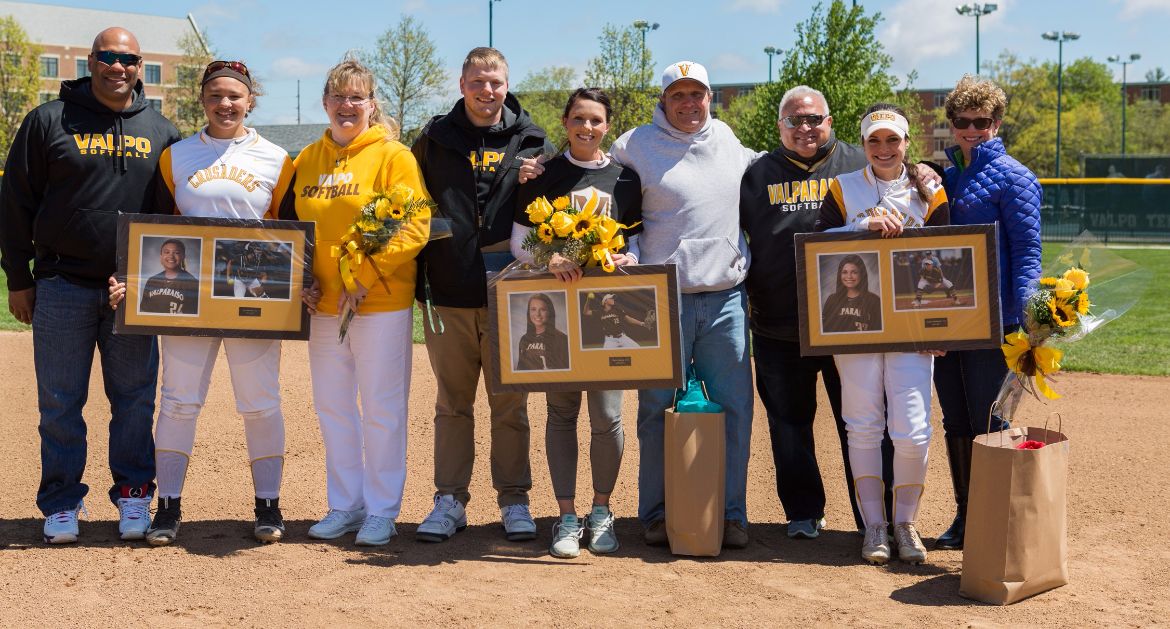 Senior Sam Stewart (Frankfort, Ill./Lincoln-Way East) enjoyed a Senior Day to remember at the Valpo Softball Complex on Saturday, breaking Valpo’s single-season home runs and walks records and ending game two of the doubleheader sweep of Wright State with a two-run homer which closed out a 9-1 victory. Freshman Morgan Matalin (Crown Point, Ind./Crown Point) delivered a walk-off victory in eight innings in the opener with her first career homer, giving the Crusaders a 4-3 win. Prior to the twinbill, the Crusaders honored their senior trio on Senior Day: Jorgi Calombaris (Frankfort, Ill./Lincoln-Way East), Taylor Lawson (Tucson, Ariz./Sahuaro) and Stewart.

“It was great to see the way the team rallied behind our seniors and played for them today – I think we played better because we had them in our heart.”

“It was awesome to watch both Sam and Jorgi step up their games today, particularly in that second game. Sam comes up and gets us going with a homer; later in the game, they walk Sam so they don’t have to face her and load the bases, and Jorgi comes through and knocks in the runs. Then in Sam’s last at-bat, they let her hit and she hits a walk-off and sets a record all in one. They just combined to have a huge game, and it’s so fun to see that happen as part of their Senior Day.”

“Sam’s obviously our top hitter, and everybody knows it. But Jorgi is a threat behind her, no question, and then following Jorgi is Lanie, whose power is a weapon in that spot. So putting Sam on base with intentional walks doesn't mean an easy out to follow – the batters behind her have confidence in their ability to get on base, and it puts other teams in a tough spot when Sam comes up with runners on.”

“(Graduate assistant Taylor Williams) said it best after the game – Morgan was successful in her first at-bat because she played to our standard. We run balls out, even if it looks like they’re going to be outs, Morgan did that, ran out a fly ball, ended up on second base and ended up scoring. Good things happen when you play the game the right way, and you saw that when she came up in the eighth inning and was able to capitalize with her first career homer.”

“Ashlyn threw great for us in game two. She got a lot of ground balls and fed the defense behind her – she did exactly what she's best at in the circle. We fielded well behind Ashlyn and brought great energy and presence defensively in the second game, and I think that energy carried over into our offense.”

The Crusaders (26-21, 13-10 Horizon) look to close out the regular season on a winning note on Sunday as they host Wright State for the series finale at noon at the Valpo Softball Complex. Depending on the results of Sunday’s league games, Valpo can still be seeded anywhere from third through sixth for the upcoming Horizon League Championship.