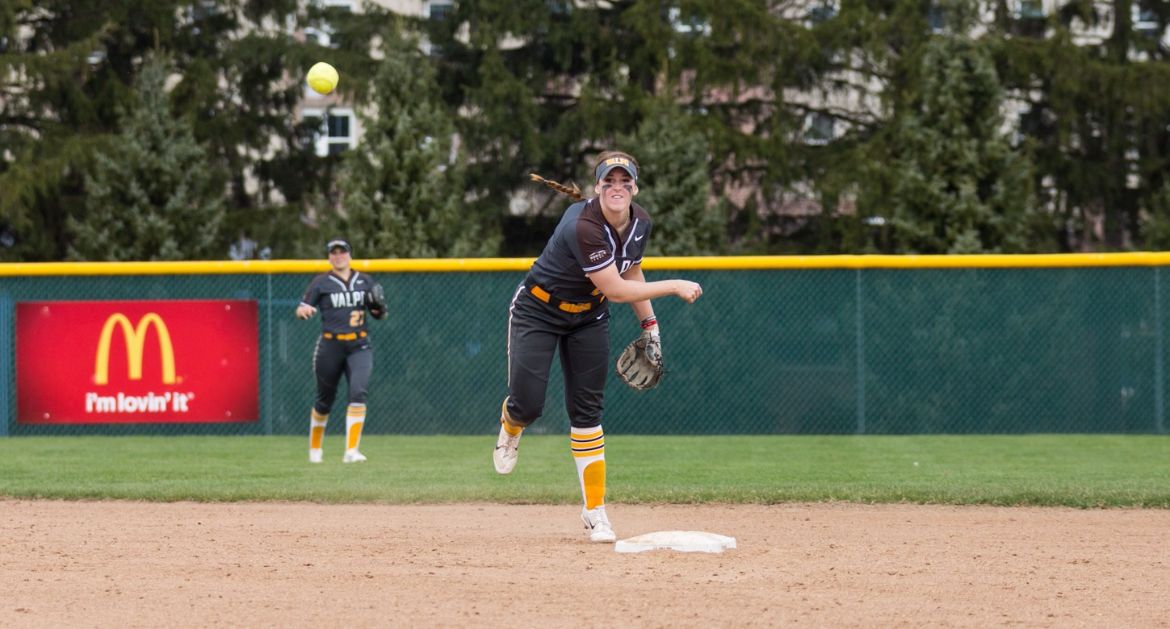 Next Up in Crusader Softball: The Valparaiso University softball team begins its initial foray into Missouri Valley Conference play this weekend as the Crusaders travel downstate to Terre Haute for a three-game series at Indiana State, beginning with a Saturday doubleheader. Valpo will briefly return home before heading to Indianapolis for a non-conference matchup at IUPUI on Tuesday afternoon.

Previously: Valpo posted a 3-2 record last weekend at the Aggie Invitational, hosted by UC Davis. The Crusaders split two games with the Aggies, won a pair of games over top-100 RPI programs from last year in Nevada and Utah State, and dropped their lone contest against Northern Colorado.

Following the Crusaders: Live stats for all four games over the next week will be available via ValpoAthletics.com. In addition, all three games of the Indiana State series are slated to be broadcast on The Valley on ESPN3.

Series Notes: Indiana State - Valpo owns a 2-8 record all-time against its new conference foe. The two programs have met in just one of the past 13 seasons, however - the Sycamores claimed a pair of wins over the Crusaders in February 2010 at the Tiger Spring Classic in Nashville, Tenn.
IUPUI - The fourth-most common opponent in program history, Valpo holds a 33-26 advantage in the all-time series with the Jaguars. Last season saw the Crusaders earn a 7-3 victory in their home opener on March 29, highlighted by a 3-for-3, 2-run, 2-RBI performance at the plate from Jaymee Lawton.

Success in the Non-Conference: For the second straight season, Valpo went at least .500 in each of its four pre-conference tournaments. While this year’s squad went 12-8 over that stretch, as compared to last year’s 12-6 mark over the same span, this year’s strength of schedule was significantly more difficult. Last year, at this point, the Crusaders’ RPI ranking was 162. This year, although the first official NCAA RPI release isn’t until next Monday, an unofficial calculation places Valpo at an RPI ranking of 89. That would be the second-best non-conference RPI in program history, currently places Valpo second among Indiana schools, and makes Valpo one of four top-100 RPI programs in The Valley.

Opening On the Road: For just the second time in the last two decades, Valpo will open conference play with back-to-back road series. The Crusaders previously opened with consecutive road trips to Youngstown State and UIC to kick off the 2014 Horizon League slate. Assuming no weather issues, and including three non-conference games the next two weeks, Valpo will have played 27 games away from home before finally opening at the Valpo Softball Complex on March 30 versus Southern Illinois.

Running Wild: Fifth-year senior Taylor Lawson continued rampaging around the basepaths last weekend at UC Davis, swiping five bases over the five games without being caught once. Now sixth in the nation in stolen bases/game, Lawson already ranks eighth in a single season in program history with a Valley-best 19 steals - just one away from seventh, two from sixth and four from matching her single-season best of 23, which currently ranks fifth in Valpo’s single-season record book. Now 64-for-68 in the steals department for her career, Lawson ranks 33rd among active Division I players in stolen bases. She also leads the Crusaders with 20 hits and 20 runs on the season, pushing her career totals to 166 hits (ninth in program history) and 107 runs (tied for sixth in program history).

Picking Up the Wins: Senior Kenzie Grossmann continued her strong pitching in Valpo’s early-season action last weekend, going 3-0 with a 0.43 ERA in four appearances at UC Davis. Grossmann picked up both of Valpo’s wins over Nevada (complete-game six-hitter) and Utah State (four shutout innings of relief, including stranding the international tiebreak runner on 3rd) on the first day of tournament play, just the second time in her Crusader career she registered two wins in a single day (April 14, 2017 at Cleveland State). Grossmann is now 8-2 on the season and is third among MVC pitchers in wins, ERA (1.30) and fewest walks/7 innings (1.43).

This Time’s the Charm: Just eight days after coming within two outs of a no-hitter, sophomore Emily Richardson took the circle against North Carolina Central in the finale from Charleston Southern on Feb. 18 and completed the task, tossing Valpo’s first no-hitter since 2013 in a 3-0 win. Richardson struck out a career-high 11 batters and picked up her second win in as many starts after registering just one win as a freshman. The no-hitter was the 10th known no-hit effort in program history and was the first seven-inning no-no since 2002.