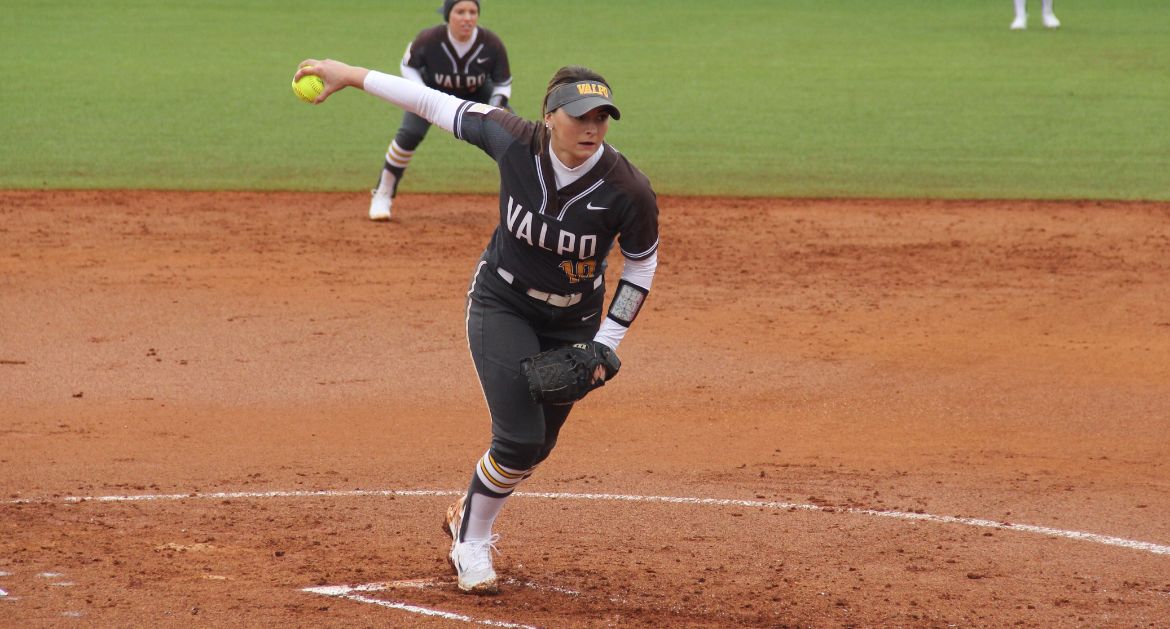 Next Up in Crusader Softball: The Valparaiso University softball team continues conference action this weekend with a second consecutive road series, making the long trip to Springfield, Mo. for a three-game set with Missouri State. The Crusaders then step away from conference play for a Tuesday mid-week twinbill at Central Michigan.

Previously: Valpo made its Missouri Valley Conference debut last weekend at Indiana State, but dropped all three games of the series to the Sycamores. The Crusaders’ scheduled non-conference game on Tuesday at IUPUI was canceled due to weather concerns.

Following the Crusaders: Live stats for all five games over the next week will be available via ValpoAthletics.com. In addition, all three games of the Missouri State series are slated to be broadcast on The Valley on ESPN3.

Series Notes: Missouri State - The Crusaders and Bears have met just three times in program history, with Missouri State holding a 2-1 advantage. Valpo won the last matchup, 4-1, in Lawrence, Kan. in March of 2010.
Central Michigan - Valpo is 2-5 all-time versus the Chippewas. CMU swept a doubleheader from the Crusaders last season in Valpo on April 18 by finals of 6-0 and 8-0. Valpo’s lone NCAA Tournament win in program history came over CMU on May 18, 2013, a 7-4 Crusader win.

Scouting the Opposition: Missouri State - The Bears enter this weekend at 17-10 overall and 3-0 in MVC play, sweeping Illinois State in their conference-opening series last weekend. Five MSU regulars are hitting at least .300, led by Kaitlin Beason’s .373 average, while in the circle, Holly Kelley and Steffany Dickerson have combined to pitch nearly two-thirds of the team’s innings and both hold ERAs between 2.30 and 2.40.
Central Michigan - The Chippewas enter the weekend at 9-12 overall and will open MAC play with a three-game series at Ohio this weekend before the Crusaders visit on Tuesday. Erika Underwood is OPSing 1.193 to lead the CMU offense and has driven in 16 runs. Hanna Warren has seen the plurality of action in the circle and owns a 3.02 ERA.

Opening On the Road: For just the second time in the last two decades, Valpo will open conference play with back-to-back road series. The Crusaders previously opened with consecutive road trips to Youngstown State and UIC to kick off the 2014 Horizon League slate. Including the Central Michigan doubleheader on Tuesday, Valpo will have played 26 games away from home before finally opening at the Valpo Softball Complex on March 30 versus Southern Illinois.

Looking to Bounce Back: Coming off of a three-game game sweep at the hands of Indiana State last week, Valpo looks to get back on the right foot this weekend at Missouri State. Last year, the Crusaders were on the wrong end of three-game sweeps twice within league play, and both times, Valpo rebounded with a three-game sweep of its own the following weekend.

Producing With Runners On: Entering this weekend at one game over .500 overall, perhaps the biggest difference between the Crusaders’ wins and losses this year has been their ability to take advantage of runners in scoring position. In Valpo’s 12 wins, the team is hitting .322 with runners in scoring position, while in its 11 losses, the team RISP batting average drops to .140. On the other side of the ball, Valpo pitching has limited its opponents to a .171 RISP batting average in wins versus a .294 RISP average in losses.

Moving Up the Charts: Fifth-year senior Taylor Lawson continued to move up a number of charts in the Crusader record book last weekend. She swiped another base, giving her 20 steals this year - tied for seventh in a single season in program history and just one shy of sixth. She ranks third in program history with 65 career steals, and is also tied for sixth with 107 runs scored and ninth with 168 hits - just two shy of eighth place in the hits department.

Going Yard: Junior Jaymee Lawton recorded the second multi-homer game of her career in the middle game of last weekend’s series at Indiana State, giving her eight home runs on the year. Lawton, who is already just one round-tripper shy of the Crusaders’ single-season top-10 chart in the category, currently ranks 19th nationally in home runs/game.

Holding Down Opponents: While she was tagged with a pair of tough-luck losses last weekend, senior pitcher Kenzie Grossmann continued her strong work in the circle, as she surrendered just three runs over 11 innings of work. Her ERA jumped slightly to 1.41 - still good for third in the conference - as she has surrendered two earned runs or fewer in nine of her 10 starts this year. Grossmann also tallied 11 strikeouts versus just two walks and has struck out 53 batters this year while walking only 13 in 64.2 innings of work.