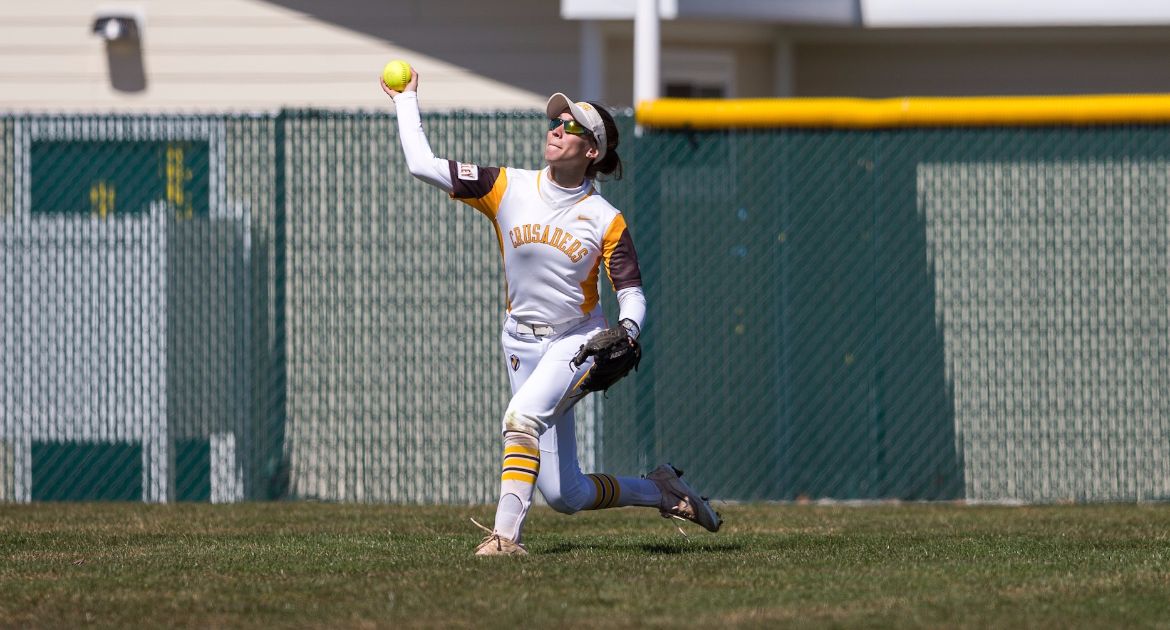 Next Up in Crusader Softball: The Valparaiso University softball team continues Missouri Valley Conference play this weekend as the Crusaders welcome UNI to the Valpo Softball Complex, the Panthers’ first-ever trip to Valparaiso. As the conference schedule nears the midway point, each series is vital, as only two games separate second through tenth place after three weekends of MVC action. The schedule has been adjusted due to projected cold temperatures, as the teams will now play one game Saturday at 2 p.m. and a doubleheader Sunday at noon.

Previously: Valpo hosted its first-ever MVC home series last weekend, as Southern Illinois visited for the scheduled three-game set. The two squads split a pair of slugfests on Friday, a 7-6 Crusader victory and a 9-6 SIU win, before Saturday’s third game of the series was cancelled due to inclement weather. The Crusaders combined for 20 hits over the doubleheader split.

Following the Crusaders: Live stats for all three games this weekend will be available via ValpoAthletics.com. In addition, all three games of the series will have audio broadcasts online as well.

Head Coach Kate Stake: Kate Stake was hired as head coach of the Valparaiso softball program on July 23, 2014 and is in her fourth season as head coach, owning 77 victories. Stake led the Crusaders to the 2016 Horizon League Championship and a berth in the NCAA Tournament - the third in program history. Stake arrived at Valpo with eight seasons of assistant coaching experience at the Division I level, most recently serving as an assistant at mid-major power Hofstra.

Series Notes: UNI has captured all six previous meetings between the two programs, but as noted above, this will be the Panthers’ first trip to Valpo. In fact, this weekend is the first time that the Panthers and the Crusaders will match up outdoors, as all six previous games have been a part of UNI Dome tournaments. Only two of the meetings have come in the past two decades - 2010 (7-2 UNI) and 2012 (6-0 UNI), both of which were season openers for the Crusaders.

Scouting the Opposition: UNI enters the weekend at 18-14 overall and 3-4 in MVC play, most recently taking two out of three last weekend at Missouri State. The Panthers hit .301 as a team, led by Brittany Roby, whose .435 batting average ranks second in The Valley. Sammey Bunch slugs at a team-high .514 clip and has a team-best 23 RBIs. In the circle, Jaclyn Spencer and Brooke Craig have split a majority of the innings this season for UNI - Spencer carries a 7-6 record with a 2.62 ERA and 65 strikeouts in 82.2 innings, while Craig is 9-5 with a 2.88 ERA.

Offensive Explosion: After going through a stretch of 10 consecutive games where they scored no more than four runs, Valpo put together a pair of strong offensive performances in the doubleheader split with SIU last Friday. The Crusaders combined for 13 runs over the two games, including seven runs in the win in the opener - the team’s highest run total since a March 4 win over Princeton. The doubleheader also was just the second time this year that Valpo scored six or more runs in consecutive games, joining Feb. 16 wins over Eastern Kentucky and Charleston Southern.

Clutch Homers: Sophomore Morgan Matalin likes to save her best for last, if her home run log is any indication. Matalin sent the Crusaders to a win in the opener against SIU with a solo homer in the bottom of the sixth for a one-run victory. All three of Matalin’s career homers have come in the sixth inning or later, as she hit a walk-off shot in the eighth inning last season versus Wright State, and connected on a two-run homer which pushed a one-run lead to three runs two weekends ago in a win at Missouri State.

Contributions All Through the Order: Valpo hit .400 as a team in the doubleheader split with SIU, and did so despite no player tallying more than four hits over the two games. Seven different Crusaders had at least two hits over the course of the twinbill, led by freshman Addi Burke tallying four hits in seven at-bats - all of which came with runners on base. Matalin, Jenna Stauffenberg and Carly Trepanier each picked up three hits as well, while Lanie Callaghan had productive plate appearances in five of her six turns at the plate, recording two hits, a walk and two sacrifice flies - becoming just the second player in program history, and the first since 2002, to pick up a pair of sac flies in the same game.

Hitting Bombs: Junior Jaymee Lawton continues to pace the MVC ranks in home runs, as she recorded her 10th round-tripper of the season in the nightcap of Friday’s doubleheader with SIU. Lawton, who ranks 15th in the nation in home runs per game, has already moved into seventh in a single season in program history in the category and has cracked Valpo’s all-time top-10 for career homers in the middle of just her second season.

Trio in the Top-50: Lawton, who also ranks 46th nationally in RBIs/game, is one of three Crusaders to rank among the top-50 in the nation in multiple statistical categories (as of April 4). Senior Taylor Lawson has swiped 21 bases this year and ranks 14th in steals/game, while she also is tied for 42nd in sacrifice bunts/game. In the circle, sophomore Emily Richardson is tied for 20th with three saves and ranks 24th, surrendering just 4.1 hits per seven innings of work.