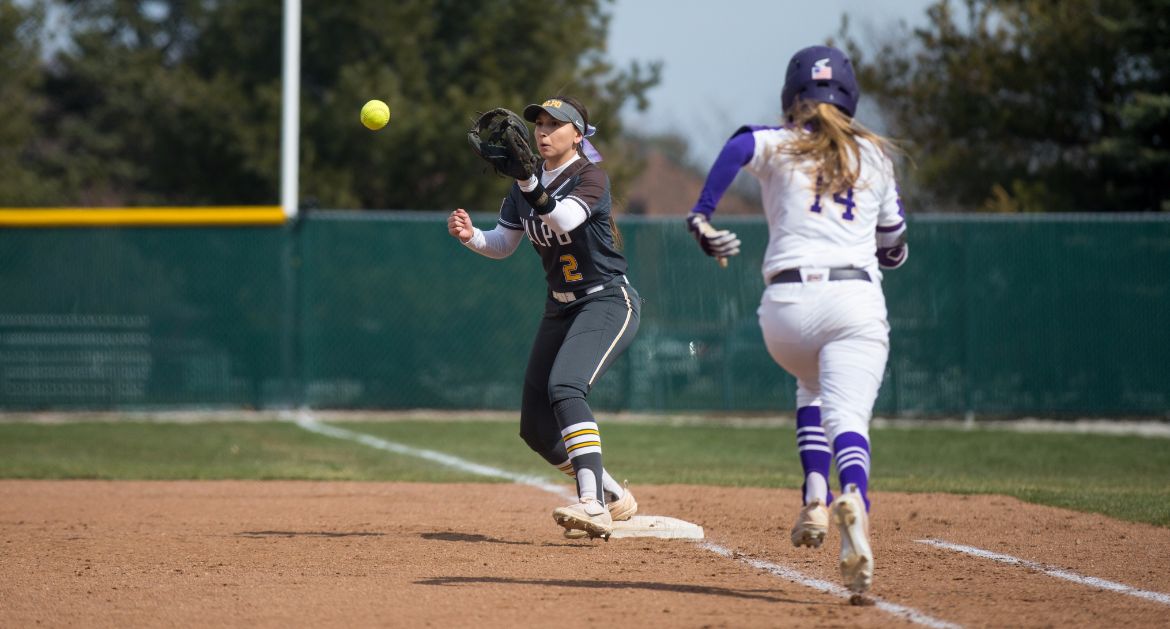 Next Up in Crusader Softball: Five critical games in the battle for positioning in the conference standings await the Valparaiso University softball team this week. The Crusaders travel to Chicago to take on Loyola in a doubleheader on Tuesday afternoon, and then return home to host Bradley this weekend in their final home conference series. Saturday will be Senior Day at the Valpo Softball Complex, as the Crusaders recognize their senior class.

Previously: Valpo dropped a 2-1 decision in mid-week action against Loyola, with the second game of the twinbill postponed to this week. Evansville then took two out of three from the Crusaders over the weekend.

Following the Crusaders: Live stats for all five games this week will be available via ValpoAthletics.com. All three games of the Bradley series will have live audio broadcasts online as well, while the games at Loyola are scheduled to be streamed on ESPN3.

Head Coach Kate Stake: Kate Stake was hired as head coach of the Valparaiso softball program on July 23, 2014 and is in her fourth season as head coach, owning 80 victories. Stake led the Crusaders to the 2016 Horizon League Championship and a berth in the NCAA Tournament - the third in program history. Stake arrived at Valpo with eight seasons of assistant coaching experience at the Division I level, most recently serving as an assistant at mid-major power Hofstra.

Series Notes: Loyola - The Ramblers will become Valpo’s second-most common opponent in program history on Tuesday, as the two teams have met 63 times to date. Loyola holds a 39-24 advantage in the all-time series, including a 2-1 win in last week’s single game at Valpo. The two teams shared conference affiliation in the Horizon League from 2008-2013, with the Ramblers owning a slight 11-10 edge in that time.

Bradley - Valpo is just 1-4 all-time against Bradley, but the two squads have only met once in the last 20 years - a 2-1 victory by the Braves in March of 2004. All five previous meetings between the Crusaders and the Braves have come at neutral sites.

Scouting the Opposition: Loyola - The Ramblers enter Wednesday’s doubleheader just over .500 overall at 21-20, and with a 7-10 record in MVC play after dropping two of three last weekend against Missouri State. Portage H.S. product Kiley Jones leads the Loyola pitching staff with a 15-9 record and a 1.76 ERA, while Shannon McGee paces the offense, hitting .392 with 27 runs scored.

Bradley - The Braves enter this week with a 6-11 record in MVC play and a 17-25 overall mark, with a single game at Illinois State on Tuesday. Bradley boasts one of the top offenses in the conference, led by Allison Apke, who leads the MVC with 11 homers and 40 RBIs and hits at a .375 clip. The Braves’ pitching staff has struggled, as the team ERA sits at a conference-worst 4.27.

A New Journey: The Crusader softball program embarks on a new journey in 2018 as Valpo competes in the Missouri Valley Conference for the first time. The conference move presents a challenging slate for the Crusaders, as each of the other nine MVC programs finished last season with an RPI ranking of 181 or better, whereas Valpo’s league opposition last season featured just one program with an RPI ranking better than 181.

Celebrating the Seniors: Eight Crusader seniors will be participating in the final home conference series of their careers this weekend against Bradley. Six of the seniors - Jasmine Ramirez, Brenna Boyle, Stephanie Moreno, Ashlyn Montgomery, Jenna Stauffenberg and Lanie Callaghan - came in together as freshmen for the 2015 season, while Taylor Lawson is in her fifth year and Kenzie Grossmann joined the program as a junior in 2017. The Crusaders have won 80 games over the last four years, including the Horizon League Championship and an appearance in the NCAA Tournament in 2016.

Four-Hit Effort: Junior Carly Trepanier picked up her second career four-hit game in the series finale against Evansville, recording two singles, a double and a triple off of Morgan Florey. It was the second four-hit game by a Valpo player this year (Taylor Lawson vs. Princeton) and matched Trepanier’s four-hit performance as a freshman in May of 2016 at Wright State. Trepanier became the first Crusader to register a single, a double and a triple in the same game since April of 2012.

Packard Mows Them Down: Junior pitcher Kelsie Packard continued her strong run of form in the circle last weekend for the Crusaders in a pair of appearances against Evansville. Packard started the series opener and surrendered just one run-scoring hit in a 2-0 loss, striking out a career-best 10 batters in the tough-luck defeat. She then came back in the series finale with 3.2 hitless innings of relief work, striking out five. Over her last five appearances, including four starts, Packard owns a 2.22 ERA and has struck out 36 batters in 28.1 innings of action.

Freshmen Producing: Crusader freshmen Addi Burke and Brittany Anderson have been among the team’s most productive hitters recently. For the second straight week, Burke tallied four hits (4-for-13) and is hitting at a .318 clip over Valpo’s last 14 games. Meanwhile, Anderson doubled her season RBI total over the last two games, driving in three runs and registering a pair of doubles. Since earning a start in the series finale at Missouri State March 25, Anderson is hitting .286 and has reached base at least once in 11 of her 13 starts in that stretch.