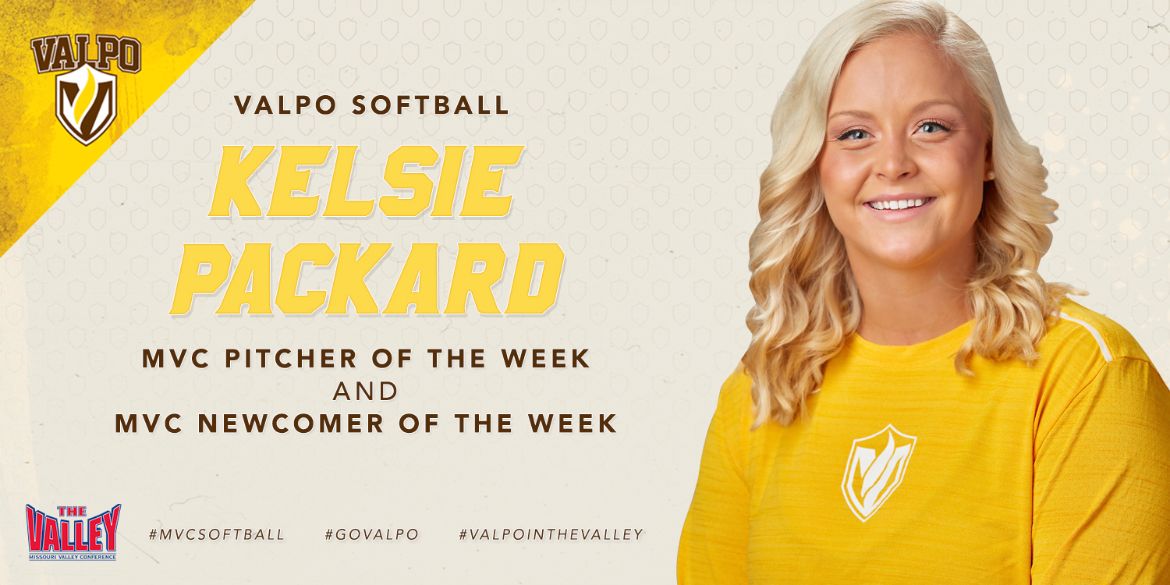 A phenomenal three-start stretch last week from Valparaiso University softball pitcher Kelsie Packard (Beloit, Wis./Turner [Rock Valley College]) led to the junior being named the Missouri Valley Conference Pitcher of the Week and Newcomer of the Week, as announced by the conference office Monday afternoon.

Already in the midst of a strong recent run of performances, Packard took her game in the circle to another level last week. She opened the week with a five-hit shutout at Loyola, striking out a career-high 11 batters in the winning effort. Packard kept the Ramblers off the board in a scoreless duel through the first four innings, stranding nine runners on base over that stretch, and then retired nine of the final 10 batters she faced to close out the win.

With a weekend series looming against a Bradley squad which entered the weekend averaging better than 5.5 runs/game in conference play, Packard got the call in the circle for the opener and neutralized the Braves offense in a 2-1 win. The junior held Bradley to six hits and did not walk a batter while striking out seven.

Coming off of that performance, Packard got the nod for the series finale on Sunday and was even stronger, scattering six hits in a 1-0 complete-game shutout and striking out nine batters. Packard allowed just one Bradley runner past second base in earning her third victory of the week.

For the week, Packard went 3-0 with a 0.33 ERA, giving up just the lone run in 21 innings of action and striking out 27 batters while walking just six. Since the start of April, Packard has posted a 1.42 ERA in seven starts and has struck out 63 batters in 49 innings of work. She has also tallied at least five strikeouts in each of her last nine appearances – the longest known stretch by a Crusader pitcher in program history.