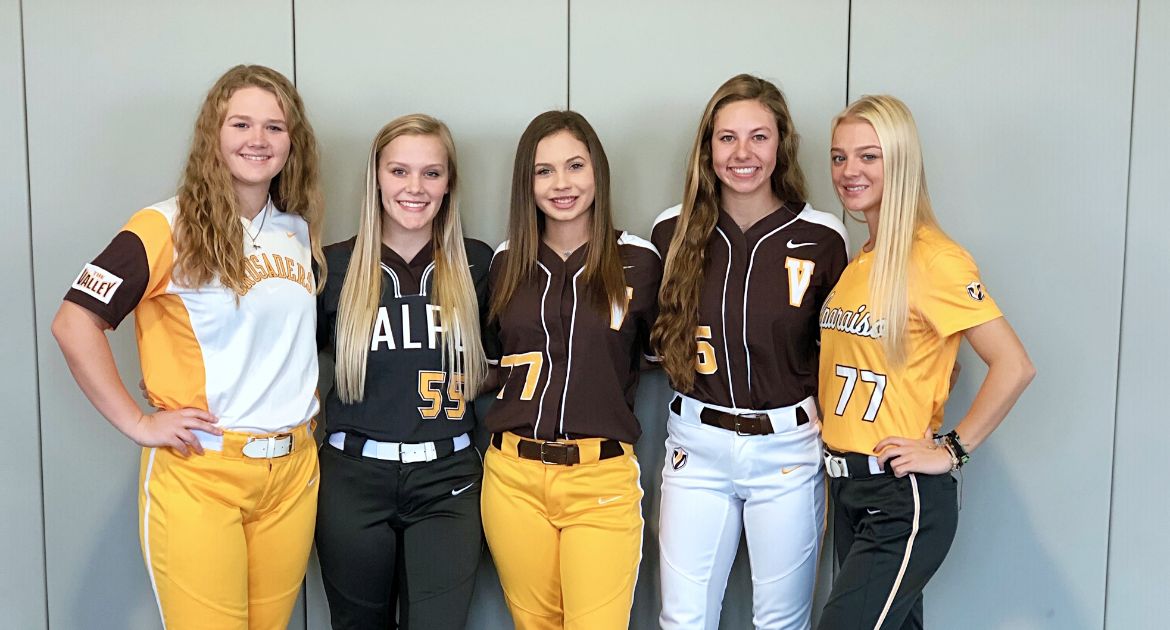 The Valpo softball program will welcome five incoming freshmen to the team next year, as all five members of the class of 2020 returned their signed National Letters of Intent over the last few days.

“I’m very pleased with the work that my staff put in to identify and bring in these five student-athletes,” said head coach Kate Stake. “We’ve secured greater depth in our outfield and also brought in two solid competitors on the infield. I also think the five of them give us a well-rounded set of hitters; power, speed, versatility and consistency. What’s more, these five players and their families are the type of people we want in our program. They’re enthusiastic, they’re genuine, and they believe in the great experience that Valparaiso University and our softball program can provide. We are excited to officially welcome them into Valpo Softball today.”

Betz was a Third Team All-State selection in 2018 as a sophomore for the Redbirds, batting .509 en route to being named the team’s MVP and Offensive Player of the Year. Last year as a junior, Betz hit .422 while earning All-Conference accolades, while her freshman year was highlighted by earning the team’s Defensive Player of the Year award as she posted a .991 fielding percentage. Betz currently plays her travel ball for the Extreme Elite 18u Gold. She hit .420 with an OPS of 1.131 in the summer of 2019, driving in 25 runs and scoring 30, and was a member of the 16u Gold team in 2018 which earned a berth into the PGF Premier National Championship.

Stake on Betz: “Ashlyn is a student of the game with a high softball IQ; she likes talking the game and improving herself on both sides of the ball. She’ll bring a strong lefty bat to our lineup and she’s a very solid first baseman as well. She has the ability to be a top-flight hitter in the Valley. Ashlyn has a great presence about her and a genuine excitement about her future here at Valpo, and we’re equally enthusiastic that she’s decided to make Valpo Softball her team.”

Crompton has been a record-setting performer at the plate for the Silver Stallions through her first three seasons of high school ball. A First Team All-State honoree each of the last two years after earning Second Team All-State accolades as a freshman, Crompton set an IHSA state record in 2018 as she hit .768 for the season. She also holds the IHSA state record with 18 consecutive hits, and hit .731 as a freshman in 2017, fourth-best in a single season in state history. Conference MVP last year as a junior, she led CORL to its first-ever regional championship and a berth in the sectional finals. Crompton plays her travel ball for Illinois Force, the same program that current Valpo freshman Lauren Kehlenbrink played for.

Stake on Crompton: “Emily has enjoyed a lot of success at the high school level, and we’ll look to her to bring that over to her college career. A lefty slapper and hitter, she has a lot of tools to contribute to our offense. Emily is hard-working and determined to grow as a player; I’ve seen that growth over the course of the last year and expect she’ll continue to develop here at Valpo.”

Hecker is a two-time state champion for Blue Springs South H.S., the alma mater of current Valpo freshman Easton Seib. A two-time All-State honoree and also a multiple time All-Region, All-District and All-Conference recipient, Hecker set the Jaguars’ single-season batting average record last year, batting .533. Hecker plays her travel ball for Select Fastpitch, the same program which current Crusaders Peyton Moeder and Ryan Milkowski came from. She helped her travel squad capture second place at the PGF Premier National Championship this year, as well as take first place at the Top Gun Invitational. In addition to her exploits on the diamond, Hecker is also a three-time All-State honoree in swimming.

Stake on Hecker: “Regi is a winner. She’s made significant contributions to her high school’s back-to-back state championships and helped lead her travel team to a second-place finish at PGF Nationals this summer. Regi’s a consistent and reliable player who has the opportunity to contribute right out of the gate for us in the outfield. Additionally, she’s played with three of our current players and I’m confident she’ll be able to step in and continue shaping our culture alongside them.”

Millhorn has earned First Team All-Region, First Team All-District and First Team All-League during her time with the Pirates. Currently playing travel ball for Turnin2 Fastpitch, Millhorn previously played with the Michigan Finesse, helping her team to a 17th-place finish at the 2019 PGF Platinum National Championships and a fifth-place finish at TCA/USA Nationals. She is ranked as the 24th-best catcher in the nation in the 2020 class by Extra Innings Softball.

Stake on Millhorn: “Kylie was the loudest and most locked-in player at the park, and played the game the way (former Valpo player and current volunteer assistant) Jorgi Calombaris did. That caught my attention, and what kept it was her fearlessness at 3B, her ability to play behind the plate, and her steady bat in the middle of the lineup. We look forward to getting Kylie on campus and working her through a number of defensive options with her versatility.”

Skapyak helped the Cougars to a district championship last season as a junior, earning First All-County and All-Conference accolades while hitting .418. It was her second consecutive year hitting above .400, as she posted a .407 batting average as a sophomore in 2018.  Skapyak and Millhorn have been travel teammates, as Skapyak is also currently playing Turnin2 Fastpitch after previously playing with the Michigan Finesse, helping her team to a 17th-place finish at the 2019 PGF Platinum National Championships and a fifth-place finish at TCA/USA Nationals.

Stake on Skapyak: “Kayla is a dynamic batter on the left side of the plate, able to find her way on slapping or swinging away. She has the speed to turn doubles into triples and steal some bases for us as well. Kayla’s developed significantly over the last year and I’m excited to get her on campus and start working with her. I think she still has a tremendous amount of upside and has the opportunity to help our program move forward in the Valley.”