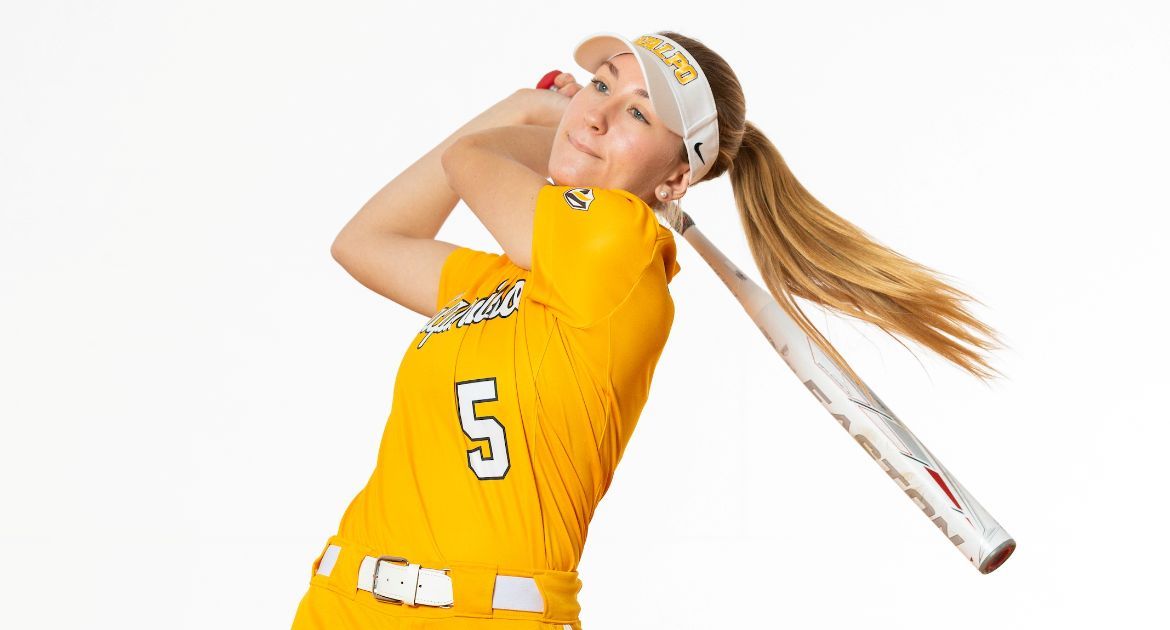 Next Up in Valpo Softball: The Valpo softball team continues pre-conference action this weekend at the Thundering Herd Round Robin from Huntington, W.V. Valpo will play four games over a three-day span, facing Bowling Green and Saint Francis (Pa.) in addition to a pair of contests against host Marshall.

Previously: Valpo split a doubleheader last Saturday at Belmont, falling 2-1 in walk-off fashion before run-ruling the Bruins in game two, 9-1. Valpo’s scheduled game on Friday versus WKU was canceled and will not be made up.

Looking Ahead: Valpo’s scheduled home opener is next Wednesday, March 10 against Western Illinois. The Brown and Gold will close out the pre-conference schedule March 13-14 at Louisville’s Red & Black Challenge, facing the host Cardinals once and WKU twice.

Following Valpo Softball: Live stats will be available for all four games this weekend, while Marshall is doing radio broadcasts for Valpo’s two games against the Thundering Herd.

Head Coach Kate Stake: Kate Stake was hired as head coach of the Valparaiso softball program on July 23, 2014 and is in her seventh season as head coach in 2021. Stake, who is 116-161 at Valpo, led Valpo to the 2016 Horizon League Championship and a berth in the NCAA Tournament - the third in program history. Stake arrived at Valpo with eight seasons of assistant coaching experience at the Division I level, most recently serving as an assistant at mid-major power Hofstra. She played her collegiate softball at fellow MVC member Illinois State and is a 2005 graduate of ISU.

Series Notes: Bowling Green - Valpo and BGSU have split eight all-time meetings, while the Brown and Gold are 2-1 against the Falcons under Coach Stake. The last matchups came in a twinbill at Valpo on March 29, 2016, a doubleheader swept by Valpo by scores of 4-3 and 6-0.

Marshall - This will be just the third and fourth games in the series between Valpo and Marshall. The two teams only met previously for a March 9, 2010 doubleheader at Marshall - the Thundering Herd won game one 8-0 before Valpo rebounded with a 6-4 win in the nightcap.

Saint Francis (Pa.) - Valpo and SFU have also met just twice before, with Valpo claiming both games. The last meeting came in Orlando, Fla. on March 3, 2010, with the Brown and Gold prevailing 6-1.

Scouting the Opposition: Bowling Green - The Falcons enter the weekend at 6-5 and boast one of the nation’s top pitchers in Payton Gottshall, who is 6-1 with a 0.56 ERA and has struck out 108 batters in 50.1 innings of work.

Marshall - The Thundering Herd are finally making their season debut this week after having their first two tournaments canceled. Marshall posted an 18-7 record in the truncated 2020 campaign.

Saint Francis (Pa.) - The Red Flash enter the weekend with an impressive 8-1 mark this season after going just 5-18 last year. Tayven Rousseau leads the SFU offense, hitting .481 with three homers and 14 RBIs, while Grace Vesco has seen the most work in the circle and is 5-0 with a 1.36 ERA.

An Offensive Explosion: After scoring just eight runs over the season’s first five games, the Valpo offense came alive in the nightcap run-rule win over Belmont, posting nine runs on seven hits, two walks and three hit batters over the five innings. Taylor Tonoian and Taylor Herschbach both connected on their first home runs of the season and second of their careers in the victory, both of which came with two outs and accounted for five of Valpo’s nine runs. Kate Beckemeyer scored three runs in the win, just one run shy of matching Valpo's single-game individual record.

Kowalski Continues Strong Start: It might not have been a one-hitter, like she recorded on opening weekend in a win over Western Illinois, but freshman Caitlin Kowalski enjoyed another strong performance in the circle in Valpo’s win over Belmont. Kowalski scattered six hits and allowed just one run in the complete-game win while striking out eight Bruins. Kowalski has appeared in five of Valpo’s first six games to open her career, including three starts, and owns a 1.31 ERA while striking out 21 batters in 16 innings.

Burke Stays Hot: After a strong opening weekend at DePaul, senior Addi Burke took her game to another level in the twinbill at Belmont last weekend. Burke reached base in five of her six plate appearances in Valpo’s doubleheader at Belmont, going 4-for-5 with a double and a walk. She drew a key free pass to keep a two-out rally alive in the 6th inning of the opener, which eventually saw Valpo score a run to break the scoreless tie. In the second game, her leadoff single in the 5th inning sparked a 5-run frame which allowed Valpo to earn the run-rule win. Burke is hitting a team-best .500 through two weekends of action (7-for-14) and owns a .563 on-base percentage, while defensively, she has handled 21 chances at second base without committing an error.

A Lot of Debuts: Kowalski was one of seven freshmen who saw their first collegiate action for the Brown and Gold on opening weekend at DePaul. Regi Hecker and Kayla Skapyak made two starts apiece in the dome, while Emily Crompton earned one start. Ashlyn Betz pinch-hit on two occasions and Alexis Johnson pinch-ran three times, stealing two bases and scoring a run. In the circle, Madison Wathen made a relief appearance as well.