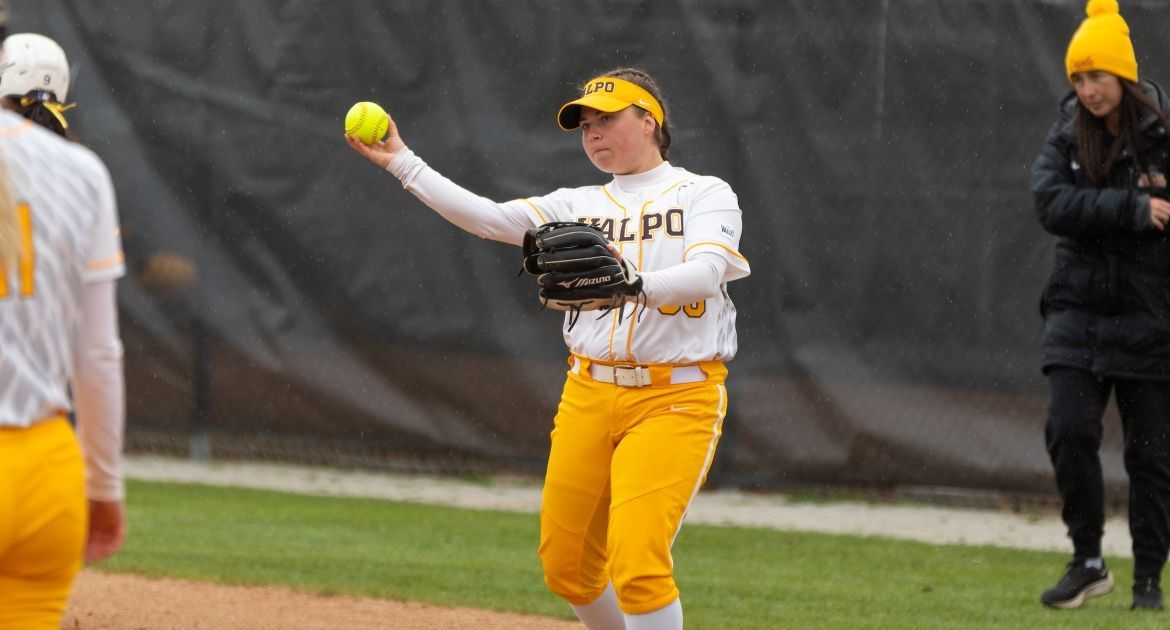 Next Up in Valpo Softball: The Valpo softball team finishes out the regular season this weekend with a three-home game series against visiting Evansville, shifted back one day to a Saturday doubleheader and a Sunday single game. On Saturday in between games, the Beacons will hold their Senior Day ceremony, honoring six members of the program competing at the Valpo Softball Complex for the final time this weekend.

Previously: Valpo won its mid-week game at Loyola, 6-2, to claim the season series from the Ramblers. The Beacons then fell in a three-game series at Illinois State in its final road games of the regular season.

Looking Ahead: The Beacons will open MVC Tournament play from Springfield, Mo. on Wednesday afternoon, May 11, at 1:30 p.m. against the tournament’s seventh seed.

Following Valpo Softball: Live stats for all three games this weekend will be available via ValpoAthletics.com.

Head Coach Amanda Eberhart: Amanda Eberhart was hired as head coach of the Valpo softball program in July of 2021. She brings seven years of head coaching experience at the Division I level, most recently spending the last three years as the head coach at Omaha and previously leading the IUPUI program for four seasons. Eberhart, who owns 143 career victories as a head coach, also has eight seasons of experience on staffs at Big Ten programs.

Series History: The Beacons are just 5-20 all-time against the Purple Aces, including a 2-8 mark since joining the MVC. Valpo went 1-2 against Evansville in their 2018 regular season series, the only time Valpo has hosted UE since joining the Valley. Last season’s series at Evansville was highlighted by a two-hit performance in the circle from Caitlin Kowalski in the opener and the first home run of Addi Burke’s career.

Scouting the Opposition: Evansville enters the weekend with a 23-24 overall record on the season and is currently ninth in the MVC standings with an 8-16 conference mark. The Purple Aces dropped all four of their games last week, falling in a single game to Indiana State and in three games at Southern Illinois. Marah Wood has been the Aces’ biggest threat at the plate, slugging at a .582 clip with eight home runs. Izzy Vetter tossed multiple no-hitters earlier this season in the circle and is 14-12 with a 4.20 ERA and 172 strikeouts in 150 innings of work.

Celebrating the Seniors: The Beacons will celebrate six members of the program on Senior Day Saturday as they participate in the final home series of their Valpo careers. Players Peyton Moeder, Jaina Westphal, Taylor Tonoian and Kate Beckemeyer, as well as student managers Taylor Knight - who moved into that role this season after three years as a player - and Gabi Westphal.

Schedule Subject to Change: It wouldn’t be a Midwest spring without crazy weather necessitating schedule adjustments, but this spring seems to have had more moving parts than ever before. Of the Beacons’ nine MVC series, only one - the April 15-16 series hosting UNI - has had all three games played as originally scheduled, both date and time. Despite that, assuming all three games this weekend against the Purple Aces are played, Valpo will end up playing the full 27-game MVC slate for the first time since joining the conference. In fact, the 2017 team (24-game Horizon League slate) is the only one in the last decade which has not had at least one league game canceled.

Taking the Series: Valpo came away with the season series win over the Ramblers for the second time in four seasons as MVC members with its 6-2 win last week in Rogers Park. The Beacons split the previous week’s doubleheader with Loyola in Valpo to make last Tuesday’s matchup the rubber match of the series. It was Valpo’s first MVC series win since taking two of three from Indiana State April 19-20, 2019.

Rallying for Wins: Each of Valpo’s last three wins have been of the come-from-behind variety, but in much different ways. Against Purdue Fort Wayne, the Beacons trailed 4-2 entering the bottom of the sixth inning before scoring three times to earn the 5-4 win. It was the team’s first win when trailing through five innings since a 5-4 win over Marshall on March 7, 2021. Then, in the series opener with Loyola, Valpo found itself down 4-0 heading into the bottom of the first before exploding for six runs to take a lead it would not relinquish in a 9-7 win. The six-run first inning was the program’s biggest opening frame since pushing seven across in the top of the first of an eventual 9-6 win at UIC on April 3, 2019. Most recently, the Beacons plated six runs over the final two innings to turn a 1-0 deficit into a 6-2 win last week at Loyola.

Banging Out Hits: The Beacons have reached double figures in hits just three times in MVC play this year, but two of those instances came last week. Valpo posted 10 hits on the board in the mid-week win at Loyola, as four different players had multi-hit games. Then, in the series finale at Illinois State, the Beacons again registered 10 hits as a team, this time with three multi-hit efforts. Lauren Kehlenbrink tallied a pair of hits in both of those games.

Weaver Keeps On Reaching: There’s been no rookie wall for freshman catcher Addi Weaver as the regular season approaches its conclusion, as she has been the Beacons’ hottest hitter at the plate in recent weeks. Weaver carries a 10-game on-base streak into the final series of the regular season, matching the longest such streak by a Valpo player this season. Over that stretch, Weaver is 11-for-26 at the plate with four doubles, a triple and five walks, good for a .423/.516/.654 slash line over the last 10 games.

Keep On Running: Over Valpo’s last seven games, senior Jaina Westphal has stolen eight bases to give her a team-best 14 steals on the season, tied for eighth in the Valley. Included in that stretch was a three-steal game in the series finale at Drake, tying Valpo’s single-game record in the category - the second single-game mark Westphal tied in the month of April, as she had previously tied Valpo’s single-game home run record with a pair of long balls against Purdue Fort Wayne. Westphal’s 14 steals are just three shy of cracking the program’s single-season top-10, while she now has 38 career steals, one shy of a tie for fourth place in program history.