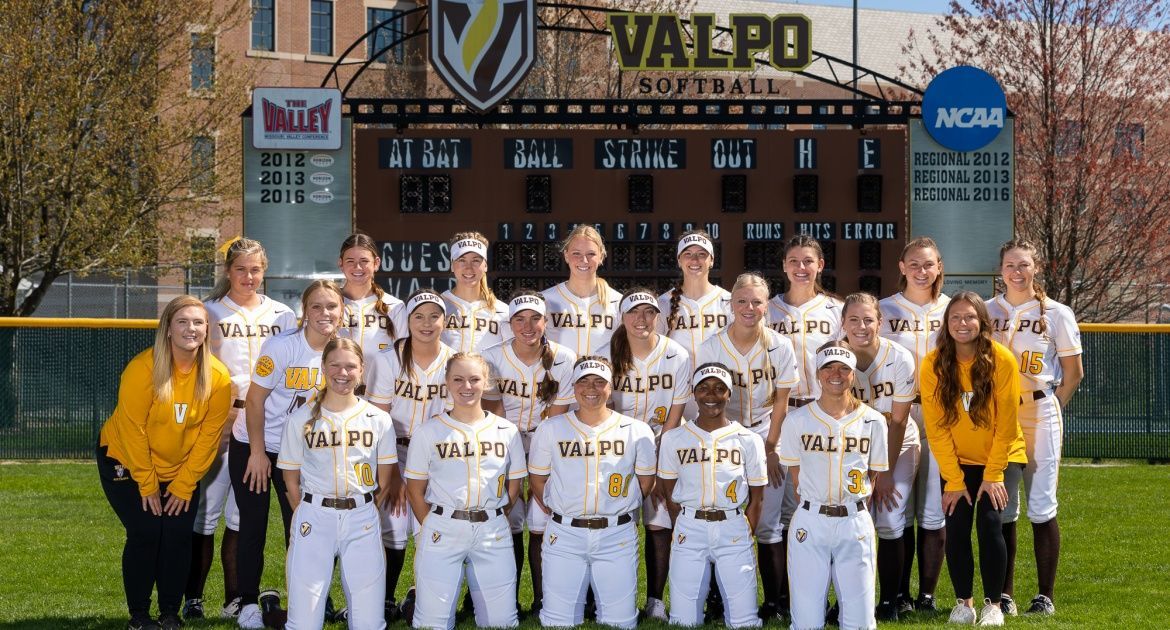 Next Up in Valpo Softball: The Valpo softball team heads to the 2022 MVC Tournament this week in Springfield, Mo. As the tenth seed, Valpo opens tournament play against seventh-seeded Indiana State on Wednesday afternoon. The Beacons will have to win five games in a row in the single-elimination bracket to claim the tournament title.

Previously: Valpo won its final regular-season series, sending its seniors off with a series win over Evansville at the Valpo Softball Complex last weekend. The two squads split the Saturday twinbill, with Valpo winning the opener 5-1 and the Purple Aces taking the nightcap in eight innings, 2-1, before the Beacons earned a 10-0 run-rule win in the regular season finale.

Following Valpo Softball: Every game from the 2021 MVC Championship will be broadcast live on ESPN+, with R.C. McBride and Laura Leonard on the call. Live stats
for all of Valpo’s tournament games will also be available via ValpoAthletics.com.

Head Coach Amanda Eberhart: Amanda Eberhart was hired as head coach of the Valpo softball program in July of 2021. She brings seven years of head coaching experience at the Division I level, most recently spending the last three years as the head coach at Omaha and previously leading the IUPUI program for four seasons. Eberhart, who owns 145 career victories as a head coach, also has eight seasons of experience on staffs at Big Ten programs.

Schedule Subject to Change: It wouldn’t have been a Midwest spring without crazy weather necessitating schedule adjustments, but this spring seems to have had more moving parts than ever before. Of the Beacons’ nine MVC series, only one - the April 15-16 series hosting UNI - had all three games played as originally scheduled, both date and time. Despite that, Valpo ended up playing the full 27-game MVC slate for the first time since joining the conference. In fact, the 2017 team (24-game Horizon League slate) is the only other one in the last decade which has not had at least one league game canceled.

Taking the Series: Valpo won two of its final three series in the home stretch of the regular season. The Beacons won the rubber matchup with Loyola after splitting a mid-week twinbill the previous week, and then closed the regular season by taking two of three games from Evansville. Prior to the series win over Loyola, Valpo had not captured an MVC series since taking two of three from Indiana State April 19-20, 2019.

Banging Out Hits: After reaching double digits in hits just twice in a 27-game span, the Beacons closed the regular season by tallying 10 or more hits in four of their final seven games. Valpo posted 10 hits in the mid-week win at Loyola and the series finale at Illinois State before bookending the Evansville series with 11-hit efforts in their two wins over the Purple Aces.

True Dual Threat: Senior Jaina Westphal keeps the defense guessing when she’s at the plate. Westphal has registered 19 hits via the bunt this year, but also has the ability to hit for power, as she is tied for the team lead with four home runs - including a round-tripper in the first at-bat of her Senior Weekend last weekend against Evansville. Once she gets on base, there’s no question what Westphal might do, as she has stolen 16 bases this year - seventh in the MVC and one shy of Valpo’s single-season top-10. After swiping two bases in the middle game against Evansville last weekend, Westphal now has 40 career steals, fourth-most in program history. She has tied a pair of program single-game records this year as well, hitting two home runs in a game against Purdue Fort Wayne and stealing three bases in one game against Drake.

Strong MVC Hitting: Junior Lauren Kehlenbrink enjoyed the best conference slate of any of Valpo’s hitters, slashing .314/.368/.614 within MVC play with nine doubles, four home runs and 20 RBIs. All of Kehlenbrink’s 13 extra-base hits this year came within conference play, as did 20 of her 22 RBIs - she finished the regular season second in conference-only play in doubles and ninth in RBIs. She closed out the regular season with her best weekend at the plate, as she slashed .625/.727/1.125 in the series victory over Evansville, going 5-for-8 with four RBIs, four doubles and three walks.

Weaver Keeps On Reaching: There’s been no rookie wall for freshman catcher Addi Weaver this year, as she has been the Beacons’ hottest hitter at the plate over the last few weeks of the regular season. While she saw her Valpo season-best 11-game on-base streak come to an end in the middle game of the Evansville series, Weaver has reached in 13 of the last 14 games and slashed .389/.463/.556 over that stretch, going 14-for-36 with 4 doubles, a triple and five walks. Her season batting average has jumped 78 points and her slugging percentage 119 points over the stretch.

Seib Stand Out: Junior pitcher Easton Seib could hardly have enjoyed a better end to the regular season. Seib was spectacular in her two starts against Evansville last weekend, earning a pair of victories to help lift Valpo to the series win over the Purple Aces. She gave up just one unearned run in 12 innings of work, posting a perfect 0.00 ERA, and allowed Evansville hitters to bat just .159 off of her. In the series opener, Seib threw a complete-game four-hitter, and after the Aces scored an unearned run in the top of the second, allowed just one runner to reach scoring position the rest of the way. Then, the series finale saw Seib toss a three-hit shutout, matching her season low for hits allowed in her third shutout of the year.