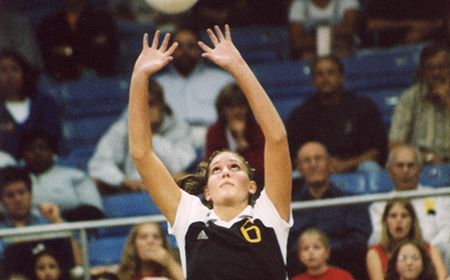 The leader of Valparaiso University’s volleyball team for the first few years of the 21st century, Cyndi (Norman) Kiper ranks among the best setters ever to play for the Crusaders and, on February 28, she will be inducted into the Valparaiso University Athletics Hall of Fame.

Kiper led Valpo to the Mid-Continent Conference championship as a senior as well as the Brown and Gold’s first NCAA Tournament appearance.  The Mid-Con Setter of the Year in 2003, she graduated from Valpo second all-time in assists with 4,886 over her four years with the Crusaders.

A three-time First Team All Mid-Con selection, Kiper was named the Most Valuable Player of the 2003 Mid-Continent Conference Tournament, a year in which the Crusaders set a then-school record with 27 victories.  As a senior, she also earned Second Team CoSIDA Academic All-District V honors.

Kiper is now an occupational therapist at Hillmann Pediatric Therapy in Minooka, Ill.

The Valparaiso University Athletics Hall of Fame Induction Banquet will be held on Saturday, February 28 at 3:30 p.m. in the Ballroom at the Harre Union.  Tickets are still available for the banquet through Friday, February 20.  The cost of the banquet is $30 per person and reservations can be made by calling Sharon Jackson at (219) 464-5471 or (800) 803-7184 ext. 72.  The inductees will also be recognized at halftime of both the men’s and women’s basketball games on the same day.