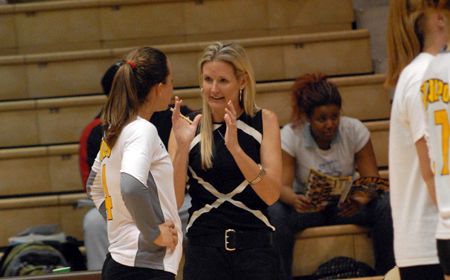 Carin Avery announced the addition of Craig Cromwell to the coaching staff today.

“I am so very excited to have Craig join my staff,” said Avery on Cromwell.  “We have known each other from our many years playing beach volleyball.  He and I share the same coaching philosophies on how to run a successful program and get the best results from our players.”

In Cromwell’s four years as an assistant at Chesterton, the Trojans went 109-29, including the program’s first ever conference championship in 2008.  He was part of the Post-Tribune’s Coaching Staff of the Year in 2007, as the squad reached the sectional finals for the second straight year.  With the Trojans, Cromwell assisted in the planning and implementation of drills and schemes, developed a team goal-setting program and also assisted in overall training of players and scouting of opposition.

Cromwell also brings a wealth of additional volleyball experience to the program.  He has served as the head coach of the Trojan Volleyball Club 14-1 team since 2004 and also served this year as an assistant coach for the Diamond Elite Volleyball Academy 13-1 team.  He has been athletic director at St. Patrick School in Chesterton since 2007, when he was responsible for the overall guidance and coaching of both boys’ and girls’ volleyball programs.

Cromwell was IMPACT certified by USA Volleyball in 2008, and has served as an instructor for the Volleyball Professionals of EVP for the past two years.  He also is a standout player, ranked as the highest AVP Qualifying Tour player from Indiana every year since 2003 and as the highest EVP player from Indiana every year since 2001.  Cromwell has also participated across the country in numerous pro beach tours over 17 years of playing experience.

“I am really excited to be joining the Crusader program,” said Cromwell.  “I know Carin has done a tremendous job of establishing an exciting program to be part of, and hopefully I can contribute to their continued success.  I am grateful to TR Harlan and the varsity players at Chesterton for a great four years.  I will miss them terribly, but the prospect of coaching in the collegiate arena is a life-long dream.”