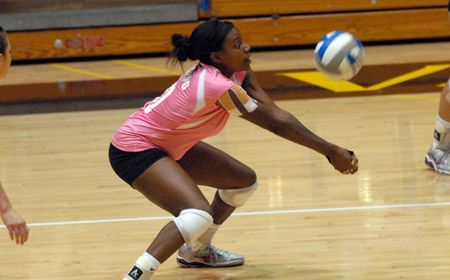 Valparaiso outside hitter Angie Porché (Lynwood, Ill./Thornton Fractional South) has been named one of ten female finalists nationwide, representing the sport of volleyball, for the 2009 Arthur Ashe Jr. Sports Scholar Award, as announced by Diverse: Issues in Higher Education magazine.  Both the female and male winners will be announced and profiled in its May 28, 2009 edition.

The Arthur Ashe Jr. Sports Scholar Awards were established in 1992 to honor undergraduate students of color who exemplify the standards set by tennis great Arthur Ashe Jr.  In addition to their athletic ability, students named Sports Scholars must exhibit academic excellence as well as community activism.  To be included, student-athletes must compete in an intercollegiate sport, maintain a cumulative GPA of at least 3.2, and be active on their campuses or in their communities.  Porché is one of 20 finalists overall from approximately 600 nominations this year.

On the court, Porché has already cemented herself as one of the greatest players, if not the greatest, in Crusader volleyball history heading into her senior season.  She has twice been named an AVCA Honorable Mention All-American, as well as All-Midwest Region, becoming the first player in program history to earn such honors in 2007.  This past season, Porché was named the Horizon League Player of the Year after averaging 4.61 kills and 2.79 digs per set, the former of which led the league and was seventh in the nation.  She also holds school single-season records for both kills (584) and attacks (1,480), both set as a sophomore, and last year she surpassed the career records in both categories (1,599 kills, 3,976 attacks).

As successful as she has been on the court, she has been just as successful off the court as well.  In the classroom, Porché maintains a 3.723 cumulative GPA as a psychology major, including a perfect 4.0 during the fall 2008 semester.  She was named to the CoSIDA/ESPN the Magazine Academic All-District V Team this past season, as well as earning a spot on the Horizon League All-Academic squad.  She has been a member of the league’s Academic Honor Roll all three semesters Valpo has been in the league and has earned Valpo Presidential academic honors each of the last two years.

On campus, Porché has been active in many groups, including the Student-Athlete Advisory Committee, Fellowship of Christian Athletes and the Black Student Organization.  In the community, she has volunteered at the Valparaiso Adult Learning Center, as well as taking part in other community service projects with her volleyball teammates.