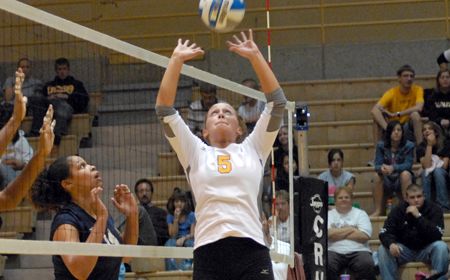 Valparaiso stared down a seven-point deficit in the third set Saturday afternoon and rallied for the set victory, but it would not be enough, as UNLV eventually downed the Crusaders in four sets (25-21, 25-22, 22-25, 25-19) in Valpo’s final match at the Campus USA Credit Union Invite in Gainesville, Fla.  Freshman libero Taylor Root (Jenison, Mich./Jenison) was awarded All-Tournament honors after picking up 32 digs and seven assists over the two matches.

“Even though we didn’t win today, I thought there was a vast improvement in our overall team chemistry on the court without Val Bollenbacher (Bremen, Ind./Bremen) out there,” said Crusader head coach Carin Avery.  “UNLV is a very big, athletic team, more so than any Horizon League team, and we figured out ways to force them into errors later in the match.”

UNLV got off to a quick start in the opening set, scoring six of the match’s first eight points.  While a service ace by Root capped a 4-1 Crusader spurt to bring Valpo back to within 7-6, the Rebels responded with four straight points to force a Valpo timeout at 11-6.

Coming out of the stoppage, the Crusaders took advantage of four UNLV errors, combined with kills by Tara Diebler (Indianapolis, Ind./Franklin Central) and Angie Porché (Lynwood, Ill./Thornton Fractional South) to put together a 6-1 run and knot up the frame at 12.  But after the teams traded sideouts, the Rebels went on a 6-2 run to go up by four points, and while Valpo got it back to within two points on three occasions, it could not get over the hump, as a Cursty Jackson kill ended the set on UNLV’s second opportunity.

Katie Britton (Mishawaka, Ind./Marian) kept Valpo around in the early stages of the second set, posting a quartet of early kills, including three straight after UNLV had gotten out to a good-sized lead to make it just a 10-9 frame.  But the Rebels answered back with five of the next six points to take a 15-10 advantage.

The Crusaders would not give in easily, however, as Porché started a run with a termination.  Amy Groesbeck (Wheaton, Ill./North) and Katie Layman (LaPorte, Ind./New Prairie) combined on a block, followed by a kill from the latter.  A pair of UNLV attack errors followed to knot up the set at 15 apiece, and after the Rebels picked up a kill, Groesbeck registered a rally-ender of her own, and Britton followed with a solo block to put Valpo ahead 17-16.

But that was the last lead the Crusaders would hold, as UNLV responded right back with a 6-1 run of its own to pull ahead by four points.  The Rebels still led by four at set point, and while Valpo held off a pair of set points on UNLV errors, Jackson ended the second frame as well with a kill to send the Rebels into the break with a two sets to none lead.

The third set saw UNLV get out to a quick start, as the Rebels led 7-2 and extended their lead to as many as seven points in the first part of the frame at 13-6.  A pair of kills by Porché followed by a UNLV attack error gave the Crusaders a quick three-point spurt to come back to within 13-9, but the Rebels responded with three straight points of their own to take a seemingly insurmountable 16-9 lead.

But that was merely the impetus for a huge Crusader run, as Valpo rattled off a 14-3 spurt, including three separate stretches scoring at least four straight points.  Britton put up four kills during the run, while Diebler posted three and Porché two during the same time frame.  A UNLV attack error closed the Crusader run with Valpo ahead 23-19, and while the Rebels scored three straight points to close within one, Porché shut the door on the set with back-to-back terminations to keep Valpo alive in the match.

The Crusaders kept the momentum into the fourth set, as with UNLV ahead 5-3, Valpo reeled off five straight points, combining a pair of Rebel errors with a block by Groesbeck and Newton, an ace by Root and a kill by Britton.  UNLV responded with a 5-2 spurt, but a Crusader timeout seemed to turn the tide back in their direction.

Out of the stoppage, Diebler and Porché recorded back-to-back kills to give Valpo a 12-10 edge, and following a pair of sideouts, Diebler came up with a service ace to push the lead to three points.  But that would be the Crusaders’ biggest lead the rest of the way, as after a sideout, UNLV caught Valpo in a disadvantageous rotation and reeled off seven straight points to take control for good.

Root led all players with 18 digs on the back line while also putting up four assists and two aces.  Setter Kim Bukowski (Waukesha, Wis./West) registered a double-double with 27 assists and 11 digs as well.  At the net, Groesbeck and Layman each recorded four blocks.

Jackson led UNLV (1-1) with a match-best 16 kills on the day and also posted a match-high five blocks.  Kela Lau Hee paced the Rebels on the back line with 15 digs.

“I thought a number of positives came out of today’s match, even though the result wasn’t a win,” concluded Avery.  “These pre-league matches are for growing and learning, and when you add in yesterday’s injury on top of that, we definitely learned a lot this weekend, and that’s why you play these matches.”

Valparaiso (0-2) returns to action next weekend at the Hampton Inn Drake Invitational with a pair of matches on Friday, Sept. 4.  The Crusaders will face off with Texas A&M-Corpus Christi at 1 p.m. before taking on the host Bulldogs at 7:30 p.m.  All four of Valpo’s matches at the tournament will be broadcast live on WVUR, 95.1 FM, Valparaiso and online at www.valpoathletics.com, which will also have links for live stats.