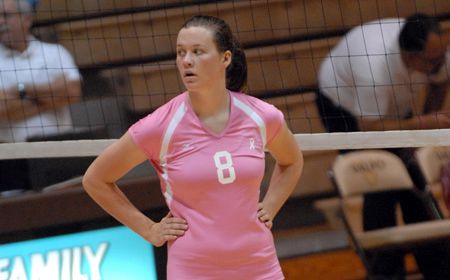 “It was great to see the team come back from down 2-0 and fight back for a big win, especially after losing in three just the night before,” said Crusader head coach Carin Avery.  “The match could have easily went the other way, but the girls showed a lot of fight and heart, and the result was a really good victory for us.”

The Crusaders carried a lead past the midway point of the opening set against the Coyotes, as five early Katie Britton (Mishawaka, Ind./Marian) kills helped Valpo to a 17-15 edge.  But USD scored the next four points, and while kills by Britton and Angie Porché (Lynwood, Ill./Thornton Fractional South) briefly tied the frame again at 19, the Coyotes went on to the opening-set win.  The second set was tight as well, with seven ties and two lead changes, but despite out-hitting USD for the set, Valpo found itself going into the in-game break down two sets to none.

The third set was also close early on, but with the score knotted at seven apiece, the Crusaders put together a 5-0 run with kills by Kim Bukowski (Waukesha, Wis./West), Katie Layman (LaPorte, Ind./New Prairie) and Britton, a service ace by Tara Diebler (Indianapolis, Ind./Franklin Central) and a Coyote attack error to gain some breathing room.  While USD closed back to within two points at 13-11, Valpo composed another quick spurt on kills from Britton and Porché and an Andrea Balsis (Benton Harbor, Mich./Coloma) service ace and would never lead by less than four the remainder of the frame.

“Between sets two and three, I think we figured a lot of things out,” said Avery.  “We were losing the serve and pass game in the first two sets, and in the break, we talked about winning that.  We knew if we could find a way to win the third set, we would win the match, and that served as the start of the comeback.”

South Dakota took the early advantage in the fourth set, but trailing 6-3, the Crusaders put together a 10-1 run, highlighted by three kills from Diebler, two from Porché and a pair of aces by Haley Wise (Mishawaka, Ind./Mishawaka), to go ahead 13-7.  South Dakota responded with an 8-2 run of its own to tie the frame at 15, but the Coyotes then committed a trio of errors, and a pair of kills by Porché gave the Crusaders breathing room and helped send the match to a decisive fifth set.

Neither side could gain a foothold in the final frame until the Coyotes put together a 4-1 spurt midway through the set to seemingly take control with a 10-7 edge.  But the Valpo offense, which led the nation in kills/set last season, stepped up and registered kills on seven of the next nine points, as Porché led the way with three terminations to go with two from Amy Groesbeck (Wheaton, Ill./North) and one apiece by Diebler and Britton, the latter of which gave the Crusaders match point at 14-12.  Valpo would need just the one clincher, as a Coyote attack error ended the match.

Britton and Porché paced the Crusader offense, which tallied 73 kills on .280 hitting, with identical hitting lines from the outside, as both put up 18 kills on 38 swings.  Britton’s 18 kills marked a new career high, while Groesbeck also posted a new career best with 14 kills on .300 hitting.  Diebler rounded out a quartet of Crusaders with double-figure kills, registering 13 terminations.  Bukowski dished out a match-high 42 assists.

On the defensive side of the ball, Valpo out-dug South Dakota (2-4) by a 75-54 margin, helped by an impressive 28-dig performance by freshman libero Taylor Root (Jenison, Mich./Jenison).  Wise reached double figures in the category for the first time on the season, posting 15 digs, while Porché and Balsis tallied nine digs apiece.

The Crusaders’ second match of the day was a lot less dramatic, as they never trailed in any point of any of the three sets.  A strong defensive effort spearheaded the Valpo victory, as it registered 12 total team blocks, led by seven from Layman and six by Groesbeck, while holding the Ladies to a -.036 attack percentage.  Nobody needed to register more than six kills for the Crusaders to earn the sweep, as Britton and Jenny Pokorny (Geneva, Ill./Geneva) led the way with six apiece.  Pokorny put together a solid all-around match with 11 assists, eight digs, four blocks and two aces to go with her sextet of terminations.

The opening set saw the Crusaders side out on each of Centenary’s 12 serves while also swinging at a .409 clip offensively for the easy victory in the opener.  The offense was not quite as sharp in either of the final two frames, but didn’t need to be, as Valpo never led by less than four points in the second half of either set as the Crusaders cruised to the match victory.

“Centenary was a fun match for us because we were able to try a lot of different things with different lineups,” said Avery.  “It always comes in handy down the road to know that you have different players who can fill roles if necessary, and I thought we did a great job overall with all the different lineups we used.”

“I thought it was an overall good weekend for us,” concluded Avery.  “Our first weekend playing without Val, we found we have a lot of different options now.  We have to shore up a few things still on the court, but it was nice to see the amount of progress we made from last weekend to this weekend.”

Valparaiso (3-3) returns to the court next weekend at Southern Illinois’ Saluki Invitational with a 5 p.m. match on Friday, September 11 against Murray State.  All three of the weekend’s matches can be heard live on WVUR, 95.1 FM, Valparaiso and online at www.valpoathletics.com, which will also have links for live stats.