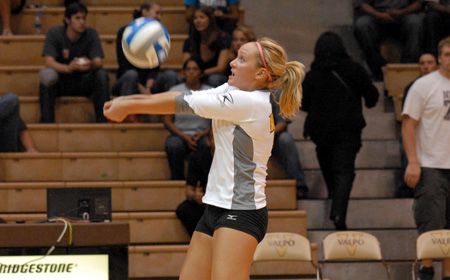 “This is a great win for our program over a UAB team with a very good volleyball reputation that’s coming off an NCAA Tournament win last year,” said Crusader head coach Carin Avery.  “Beating a team with that resume is a very good win for us.  Though our stats might not show it, we really did play well today and we kept the pressure on UAB when we needed to.”

The opening set featured numerous runs early on, as Valpo registered the first four points of the match before UAB answered with five straight points of its own.  The Crusaders responded with a 5-1 spurt, but the Blazers came right back with four more points in a row to take the lead back.  The teams then traded 4-1 runs to put UAB ahead 15-14 past the midway point of the set.

But a setter dump by Kim Bukowski (Waukesha, Wis./West) sparked a Valpo run that UAB would be unable to answer.  The Crusader setter followed with a service ace, and then set Tara Diebler (Indianapolis, Ind./Franklin Center) up for back-to-back kills to force a UAB timeout at 18-15.  Out of the stoppage, Katie Britton (Mishawaka, Ind./Marian) and Katie Layman (LaPorte, Ind./New Prairie) combined on a block, and while the Blazers gained a point back with a kill, Valpo responded with terminations by Britton and Angie Porché (Lynwood, Ill./Thornton Fractional South) to take an insurmountable lead.

An early 6-0 run in the second set, composed of two kills from Amy Groesbeck (Wheaton, Ill./North) along with terminations by Diebler and Layman and a Taylor Root (Jenison, Mich./Jenison) service ace, gave Valpo a six-point lead that it would hold throughout the entire set.  A kill by Britton set up the Crusaders with five set points at 24-19, but UAB would not fold, getting a pair of kills and three blocks to force the frame’s first tie since 1-1.  But a service error gave Valpo a sixth set-point opportunity, and Porché put down an overpass to send the Crusaders into the in-game break up two sets.

The third set saw the Blazers overcome an early 5-1 deficit and hold the lead throughout the early and middle portions of the frame.  Trailing 14-12, Valpo got a kill from Groesbeck, along with a back-row kill and service ace by Haley Wise (Mishawaka, Ind./Mishawaka), to take the lead, but UAB responded with three of the next four points to re-earn the advantage.

Trailing 17-16, the Crusader offense came up with big kills when they were needed, as Britton recorded a pair around another setter dump by Bukowski to put Valpo ahead 19-17.  Out of a timeout, a Crusader error brought UAB back to within one point, but Layman and then Groesbeck tallied kills, followed by a big rejection by Britton and Layman to force another UAB timeout.  Bukowski came back with an ace to cap the 4-0 run to put the Crusaders ahead by five, and kills by Layman and Groesbeck would end the sweep.

Valparaiso dominated UAB (4-5) in the kills category, nearly doubling the Blazers with a 52-27 advantage.  Britton led the way with 14 kills on .323 hitting, while Porché also reached double figures with ten terminations.  Bukowski handed out 37 assists to go with eight digs and five kills, in the process moving into fifth place on Valpo's all-time assists chart.

On the back line, Root was stellar for the Crusaders, picking up 22 digs while no other player on either side of the ball reached double figures in the category.  Britton was in on all three of Valpo’s blocks at the net, while Bukowski and Andrea Balsis (Benton Harbor, Mich./Coloma) each registered a pair of service aces.

“We’re excited to put ourselves in the position to play for the championship at a tough tournament,” said Avery.  “We’re getting better and better as a team each weekend out, and we’re playing with a lot more confidence this weekend than we have the first two weekends.”

Valparaiso concludes tournament play Saturday evening at 7 p.m. as the Crusaders take on the host Salukis.  All the action can be heard live on WVUR, 95.1 FM, Valparaiso and online at www.valpoathletics.com, which will also have a link for live stats.