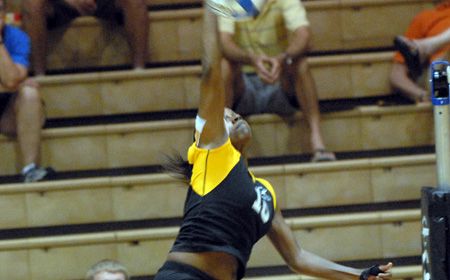 The Crusaders never trailed in any of the three sets against Maryland-Eastern Shore.  The opening set easily went the Crusaders’ way, as Valpo put together an early 8-2 run, including three kills by Tara Diebler (Indianapolis, Ind./Franklin Central) to pull ahead by six points, a deficit which the Hawks would never be able to cut under five points as Valpo cruised to the win in the opener.

Valpo led start to finish as well in set two, but would not capture the second frame quite as easily, as a late 4-1 spurt brought UMES back to within 22-20.  But a kill by Amy Groesbeck (Wheaton, Ill./North) was followed by a block by Katie Britton (Mishawaka, Ind./Marian) and Katie Layman (LaPorte, Ind./New Prairie) to give the Crusaders four set points, and they would need only one, as Angie Porché (Lynwood, Ill./Thornton Fractional South) aced the Hawks to put Valpo ahead two sets.

The eventual final set also stayed close throughout, as the Hawks earned a tie as late as 14-14 and were still within two points at 20-18.  A Layman kill gave Valpo a three-point advantage, however, and following a UMES error, Britton came up with a termination of her own to push the advantage to five points.  The Hawks would side out on each of Valpo’s next two serves, but it was all for naught, as the Crusaders responded in kind on kills by Groesbeck and Britton to wrap up the sweep.

Valparaiso only held a 39-33 advantage in the kills department over Maryland-Eastern Shore (8-4), but also committed just 11 attack errors to the Hawks’ 18.  Porché paced Valpo with ten kills on .364 hitting, while each of the Crusaders’ other four primary attackers all tallied at least five kills.  Kim Bukowski (Waukesha, Wis./West) handed out 28 assists running the Crusader offense.

Taylor Root (Jenison, Mich./Jenison) led all players with her 14 digs on the back line, while Andrea Balsis (Benton Harbor, Mich./Coloma) also reached double digits in the category with ten digs of her own.  Groesbeck and Layman each tied for match-high honors with four blocks at the net.

Valparaiso continued its standout play in the opening set against the host Panthers, turning a 16-15 deficit into a win in the opening frame thanks to a set-ending 10-3 run which included a single kill from each of Valpo’s five primary hitters, as well as Bukowski.  But Pittsburgh would rebound in the second set, not letting the Crusader lead after 7-6.  Valpo cut the Panther advantage to 21-19 late, but Pitt scored the final four points of the set to tie the match up at one set apiece.

The Crusaders looked like they had the momentum late in the third frame, putting together a 4-1 run with kills by Britton and Diebler, along with a Pitt error and a Balsis service ace, to turn an 18-16 deficit into a 20-19 lead.  But the Panthers responded with the final six points of the set, getting blocks on each of the final two points, to move one set away from the match win.  Valpo led for much of the first half of the final set, but trailing 10-9, a 4-0 run gave Pitt the lead for good, and despite kills by Diebler and Porché staving off the Panthers’ first two match opportunities, the Panthers would close out the four-set win.

Valpo held its own offensively against Pitt, putting down 56 kills on .278 hitting, but the Panthers countered with 58 kills on .305 hitting.  Porché again paced the Crusader offense, tallying 17 kills while swinging at a .433 clip.  Britton registered 13 kills of her own, while Groesbeck picked up her first career double-double with ten kills and ten digs.  Root led all players with 18 digs, while Layman led Valpo with three blocks.

Valparaiso (7-5) kicks off the 2009 home campaign at the Athletics-Recreation Center with a pair of Horizon League matches next weekend.  The Crusaders will host Wright State on Friday night and Cleveland State on Saturday night, both matches taking place at 7 p.m.  All the action can be heard live on WVUR, 95.1 FM, Valparaiso and online at www.valpoathletics.com, which will also have links for live stats, as well as live video through the Horizon League Network.