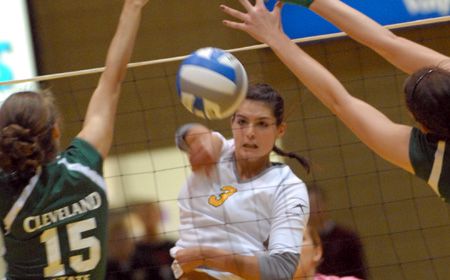 “I’m very proud of the way this team came back tonight, especially considering how young our lineup is right now,” said Crusader head coach Carin Avery.  “In that fourth set, we got the sideout to get back to four points and just got into a good rotation for us and kept building the momentum to come back.  Both Andrea Balsis (Benton Harbor, Mich./Coloma) and Jenny Pokorny (Geneva, Ill./Geneva) came up with some huge digs for us at the end of the fourth set, but it was just a great total team effort to come back and win tonight.”

The Crusaders got back on serve after a Wright State service error as Tara Diebler (Indianapolis, Ind./Franklin Central) stepped back to the line with Valpo down by four.  Kim Bukowski (Waukesha, Wis./West) found Angie Porché (Lynwood, Ill./Thornton Fractional South) for back-to-back kills around a Raider timeout, and then set up Katie Layman (LaPorte, Ind./New Prairie) for a termination to bring the Crusaders within one at 22-21.

Diebler then took over with her serve, registering an ace on the back line to knot up the frame and force Wright State to use its second timeout.  Out of the stoppage, the junior again came up with an ace to put the Crusaders ahead 23-22.  Porché then registered another kill to put Valpo in position to send the match to a decisive fifth set, and on its second opportunity, Layman and Porché combined on a block to complete the 8-1 set-ending run.

The fifth and final set ended up being the most closely contested of any of the five frames, featuring seven ties and three lead changes.  The two sides were tied at every point from 1-1 to 7-7 before Diebler came up with a monster kill out of the middle to give the Crusaders the lead for good.  Three straight Wright State errors gave Valpo a four-point cushion, and while the Raiders would cut the lead back to two points, kills by Katie Britton (Mishawaka, Ind./Marian), Diebler and Porché kept WSU at bay, and a Raider attack error would eventually end the match.

Wright State used an early 5-0 run in the opening set to gain a lead it would hold the entire frame.  A quick three-point spurt by the Crusaders in the middle portion of the set on a kill by Layman, a WSU attack error and a solo block by Amy Groesbeck (Wheaton, Ill./North) cut the deficit to one briefly at 17-16, but Wright State responded out of a timeout with three straight points of its own to take control of the opener.

It was a Valpo 5-0 run that gave it control of the second set, as with the score at 8-7, the Crusaders got a pair of kills by Porché, as well as a kill by Diebler, a service ace from Balsis and a WSU error to push the advantage to six points, a deficit which the Raiders would not be able to overcome as Valpo cruised to the set victory.

The third set was much like the first, as the Raiders controlled the majority of the frame and never let the lead slip under three points in the latter portions of the set.  The fourth set looked to be going Wright State’s way as well as it put itself in position to win the match, utilizing a big 8-1 run early to go ahead by seven points at 12-5.  The Crusaders would never let the lead exceed that seven-point margin, however, and while Valpo was unable to get back any closer than four points, it kept itself within striking distance until the big run late put the Crusaders over the top.

Valpo got monster performances offensively from both Porché, who tallied a season-best 23 kills on .375 hitting and also recorded 13 digs for a double-double, and Diebler, who shattered her previous career best for kills, registering 19 terminations while swinging at a .389 clip.  Diebler also matched her previous career high for service aces, picking up four.  Bukowski dished out a season-high 60 assists as well.

“Last weekend was a huge momentum boost for Tara, and she really carried that over into tonight,” said Avery.  “Once she got going tonight, she was just tremendous again.”

Defensively, the Crusaders out-dug Wright State (8-6, 0-2) by a 79-62 margin, thanks in large part to a pair of 20+ dig efforts on the back line.  Taylor Root (Jenison, Mich./Jenison) led Valpo in the category for the 13th straight match, posting a match-best 24 digs, while Balsis put up 20 digs, surpassing her previous career high set just last weekend.  Layman led the Crusaders at the net with five blocks.

Valparaiso (8-5, 2-0) returns to the court Saturday night as the Crusaders host Cleveland State at the ARC in Horizon League action.  First serve is set for 7 p.m., and all the action can be heard live on WVUR, 95.1 FM, Valparaiso or seen live on the Horizon League Network, both of which will have links available at www.valpoathletics.com.  Live stats will also be available through the official Crusader website.