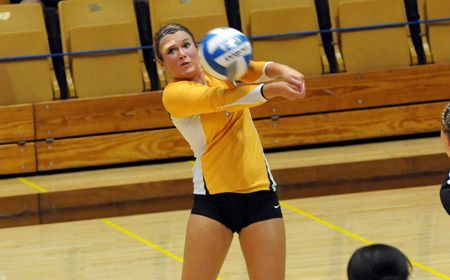 Root, who has led the Crusaders in digs in every match this season, recorded nine digs in the opening set and eight in the second set before tallying a whopping 14 digs in the final frame to set the record.  Root’s mark of 31 digs, which also marks a new career best for the freshman, broke former Crusader great Brittany Malicoat’s record for a three-set match of 30, set at Drake on Sept. 9, 2006.

“For a freshman, Taylor has been playing at a very steady, high level in the back for us,” said Crusader head coach Carin Avery.  “At times, you almost don’t even notice her, which is a good thing, because it means she is in the right spot most of the time.  She had never played middle back before this year, so there was a learning curve for her playing that position in our system, and you can tell she is becoming more comfortable as the season progresses.  She also does a very good job of just keeping the ball alive and keeping it off the ground.”

While Root was running the show on the back line, the Valpo offense continued to produce at a high level, as the Crusaders tallied 60 kills in the sweep while hitting at a .265 clip, the sixth time in the last seven matches Valpo has hit at least that well offensively.  Angie Porché (Lynwood, Ill./Thornton Fractional South) paced all players with 15 kills, but she had plenty of help, as Katie Britton (Mishawaka, Ind./Marian) registered 14 kills and Katie Layman (LaPorte, Ind./New Prairie) set new career highs with 13 kills on 26 swings.  Kim Bukowski (Waukesha, Wis./West) handed out 49 assists on the night, coming just shy of reaching Valpo’s top-five performances in a sweep all-time in the category.

“It’s really a good thing to have so many weapons offensively that can step up and produce,” said Avery.  “We know coming into league play that teams are going to key on certain players, and I thought Kim really did a nice job tonight of keeping Green Bay off balance, making smart decisions on how to distribute her sets.”

While the Crusaders ended the night with a 3-0 sweep, none of the sets came easily Valpo’s way.  The first set looked to be in the Crusaders’ back pocket as they got out to a 9-4 lead, led by five early kills from Layman.  Valpo pushed the lead to as many as six points and still led by four at 20-16 after a service ace by Jenny Pokorny (Geneva, Ill./Geneva), but Green Bay rallied back with eight of the next 12 points, staving off two Valpo set point opportunities to tie the frame at 24.  But Porché came up with a big kill and Pokorny registered a solo block to give the Crusaders the set.

The second set was back-and-forth early on, but with the Phoenix ahead 11-10, Valpo put together a 7-1 run to seemingly take control, getting three kills from Britton along with terminations by Bukowski and Tara Diebler (Indianapolis, Ind./Franklin Central) during the spurt.  Green Bay rallied back to within 20-19, but Valpo put up four of the next six points to give itself three set point opportunities at 24-21.

But the Phoenix would not go away that easily, as Nikki Hintze tallied back-to-back kills, followed by a Crusader error to knot things up at 24 for the second straight set.  Valpo gave itself three more set point chances on kills by Britton and Amy Groesbeck (Wheaton, Ill./North), as well as a Green Bay error, but all three times the Phoenix extended the frame.  Finally, on their seventh opportunity after a Green Bay service error, Britton put away the set with a kill to send Valpo into the break up two sets.

The final set saw Green Bay get out to a 10-7 lead nearing the midway point, but a quick three-point spurt by Valpo eliminated the Phoenix advantage.  The Crusaders pulled away by as many as four points at 20-16 after a Porché kill, but again Green Bay rallied, scoring five of the next six points to tie the frame at 21.  But this time, Valpo would not need extra points, as following a pair of sideouts, Groesbeck and Britton picked up kills to give the Crusaders two match points at 24-22.  They would need just one, as the Green Bay attack sailed long to send the sweep Valpo’s way.

Valparaiso held a major advantage in both the kills category (60-43) and the digs category (85-60) over the Phoenix.  Root’s effort on the back line was backed up by a number of other Crusaders, as three other Valpo players reached double figures in the category.  Pokorny registered 14 digs, nearly doubling her previous career high, while Porché added 12 digs for her fifth double-double of the season.  Bukowski chipped in ten digs as well for her second double-double of the year.

“I thought we were a bit undisciplined overall tonight, as we had a lot of unforced errors that helped keep Green Bay in the match,” said Avery.  “But to Green Bay’s credit, they didn’t make those same errors and kept the ball in play on their attacks.  We knew what their game plan would be coming in, and didn’t execute as well as I would have liked.  But even though we gave up leads, we were able to pull out the big points at the end of sets and win when it mattered, and anytime you can get a sweep in this league, you have to be happy.”

Green Bay (5-11, 1-4 Horizon) was led by 13 kills apiece from Hintze and Holly Visser.  Laura Garrow led the Phoenix on the back line with 13 digs, while Hintze paced all players with four blocks at the net, as Green Bay racked up eight team blocks.

Valparaiso (10-6, 4-1 Horizon) moved back into a tie for first place with the sweep and looks to make it three wins in a row Wednesday night as the Crusaders host Milwaukee at the ARC.  First serve is set for 7 p.m., and all the action can be heard live on WVUR, 95.1 FM, Valparaiso and seen online on the Horizon League Network.  Links for both the audio and video will be available through www.valpoathletics.com, which will also have a link for live stats.