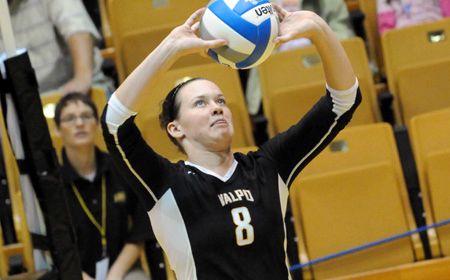 “This was a really important win for us tonight,” said Crusader head coach Carin Avery.  “The way we clawed back to get into the fourth set, but not coming up with the win, can be a big momentum shift in your opponent’s favor.  But even though we struggled at the beginning of the fifth set, I was happy with the way we were able to get key points at the end, as we did in all three sets yesterday.  I definitely don’t think we played excellent volleyball, but anytime you can earn a win in this league, you take it.”

The decisive fifth set saw Milwaukee make the first big run thanks to some Valpo errors, as with the score tied at four, the Crusaders committed two attack errors, a service error and miscommunication on a Panther serve leading to a UWM service ace to put Milwaukee up 8-5.  The Crusaders fought right back however, as kills by Tara Diebler (Indianapolis, Ind./Franklin Central) and Angie Porché (Lynwood, Ill./Thornton Fractional South) went along with a pair of Milwaukee errors in a 4-0 spurt to put Valpo ahead 9-8.

The Panthers got kills on each of the next two points to pull back ahead at 10-9, but Porché picked up terminations on two of the next three plays to keep Valpo in the set at 11-11.  A UWM error was followed by a kill to knot up the frame at 12 apiece, but again Porché stepped up, tallying her fourth kill of the set to put the Crusaders ahead for good.  Katie Layman (LaPorte, Ind./New Prairie) recorded a kill for the penultimate point of the match, and Valpo would need just one match point, as Porché closed out her spectacular fifth set with a service ace.

A 14-4 run in the opening set was the key to Valpo’s victory in the frame, as after trailing 8-6, the Crusaders were able to pull ahead by eight points at 20-12.  Katie Britton (Mishawaka, Ind./Marian) and Jenny Pokorny (Geneva, Ill./Geneva) each tallied three kills during the spurt, while Diebler and Porché added a pair apiece.  But in a scene reminiscent of the night before, once Valpo got set point, Milwaukee reeled off four straight kills to close within 24-23.  However, just like Tuesday night, the Crusaders were able to get the key point when it counted, as a kill by Amy Groesbeck (Wheaton, Ill./North) closed the opener.

The second set went Milwaukee’s way start-to-finish, as the Panthers held Valpo to .000 hitting during the frame to knot up the match at one heading into intermission.  The third frame looked to similarly be favoring Valpo, as Groesbeck tallied four kills and Diebler three to help propel the Crusaders to a quick 18-9 advantage.  The Panthers nearly fought all the way back, however, going on an 11-3 run of their own to cut the Valpo lead to 21-20.  The Crusaders scored the next two points, quickly answered by two straight from Milwaukee to make it 23-22 Valpo.  But Diebler stepped up to close the frame, recording a kill and then combining with Pokorny on a block to give Valpo a 2-1 lead.

Milwaukee held the lead most of the way in a tight fourth set that featured 13 ties and five lead changes.  While the Crusaders never led in the latter half of regulation, they never trailed by more than three points either, hanging within striking distance until they could put together a spurt.  That run came trailing 21-18, as Diebler and Britton picked up kills to go with a UWM error to tie the frame at 21.  Milwaukee put up the next two points, but Valpo answered back with kills by Diebler and Porché to make it 23-all.

UWM earned set point chances on each of the next three opportunities, at 24-23, 25-24, and 26-25, but Valpo held off the Panthers each time, as a Milwaukee error kept the Crusaders alive once and Porché kills resulting in tie scores each of the next two times.  Britton registered a kill at 26-all to give Valpo its first match point, but the Panthers tallied back-to-back kills, and a block sealed the fourth set Milwaukee’s way and sent the match the distance.

Both squads got standout performances on the defensive side of the ball, as Valpo narrowly out-dug Milwaukee, 102-101, while the Panthers tallied 15 blocks to the Crusaders’ 11.  Pokorny registered 24 digs, by far a career high in the category, to go along with 13 assists, six kills and four blocks.  Taylor Root (Jenison, Mich./Jenison) also picked up 24 digs to share team-high honors.  Porché added 18 digs, Kim Bukowski (Waukesha, Wis./West) chipped in 17 digs and Andrea Balsis (Benton Harbor, Mich./Coloma) also reached double figures with ten.

“A couple weeks ago, we really were struggling on the defensive end, and over the last couple weeks, Jenny has had some great practices for us and been one of our best defenders,” said Avery.  “We definitely wanted to find a way to get her on the court more often.  Against certain teams, having her in the front row attacking helps keep the opposing block guessing a bit more, because we have three hitters up front.  So it’s been nice that she’s playing at a level where we can keep her in the front attacking, have her in the back defensively, yet still be able to have Kim run our offense as the setter.”

Diebler led both the Crusader effort at the net, tallying a season-best seven blocks, and offensively, picking up 16 kills, 12 of which came in the final three sets.  Britton and Porché each recorded 14 kills as well, with the latter recording her third straight double-double.  Bukowski handed out 40 assists on the night, also registering a double-double and moving her with 67 helpers of the 3,000-assist milestone for her career.

“This Milwaukee team is a very good team, despite its record, and when they sort things out, I think they’ll still be one of the top teams in the league,” said Avery.  “I thought we definitely did a lot better tonight in the blocking department tonight against them, and it helped a ton, as we definitely struggled finding ways to get kills.  Our blocking and the strong defensive effort around it was the reason we were able to win tonight.”

Valparaiso (11-6, 5-1 Horizon) travels to the Windy City for a pair of league matches this weekend.  The first comes on Saturday afternoon, as the Crusaders take on Loyola.  First serve is scheduled for 4 p.m., and all the action can be seen live on the Horizon League Network.  Links for the HLN video, as well as live stats, will also be available through www.valpoathletics.com.