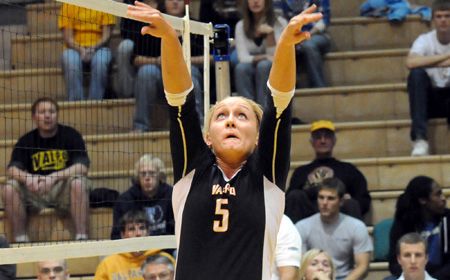 Valparaiso closed out the first half of Horizon League play in sweeping fashion, downing UIC 3-0 (25-18, 25-23, 25-19) Sunday afternoon in Chicago, Ill.  The win, Valpo’s season-best fifth victory in a row, keeps the Crusaders tied atop the league standings at 7-1.

“I am just really proud of our team, as this was a grueling week of very high-level Horizon League volleyball,” said Crusader head coach Carin Avery.  “To come out of this week 4-0 is really exciting, and I’m very happy and proud of how we handled this week.”

Two big runs in the first set helped the Crusaders take the opening frame.  Trailing 5-4, Valpo scored eight of the next nine points, thanks in large part to Katie Layman (LaPorte, Ind./New Prairie), who posted two kills and was in on two blocks during the run.  Angie Porché (Lynwood, Ill./Thornton Fractional South) also registered a pair of kills and combined with Layman on one of the blocks, while Jenny Pokorny (Geneva, Ill./Geneva) also jumped with Layman on a rejection during the spurt which put Valpo ahead 12-6.

UIC put together a 6-1 run of its own to close back within one point, but the Crusaders responded with a decisive 9-2 spurt to put the opener away.  Katie Britton (Mishawaka, Ind./Marian) tallied three kills and combined on a block with Tara Diebler (Indianapolis, Ind./Franklin Central) during the 11-point span.  Diebler also picked up a pair of kills during the run, while Porché and Kim Bukowski (Waukesha, Wis./West) each added kills and Haley Wise (Mishawaka, Ind./Mishawaka) a service ace as Valpo went on its way to an opening-set win.

The second set did not go nearly as easily for the Crusaders.  The Flames jumped out to a quick 8-3 lead, and while Valpo would score the next five points on kills by Porché and Layman, blocks by Bukowski/Diebler and Layman/Porché and a UIC error, the Crusaders could not gain the outright lead, as UIC held a small lead for much of the set.  Heading into the latter portions of the frame, a Porché kill knotted things up at 18, but the Flames responded with three straight points to force a Valpo timeout at 21-18.

The Crusaders came out of the stoppage with back-to-back kills by Porché and Bukowski to close within one point at 21-20.  Following a UIC kill, Britton came up with a termination and a Flame error tied things up at 22.  Amy Groesbeck (Wheaton, Ill./North) gave Valpo its first outright lead of the set with a kill, and after the teams traded sideouts, the Crusaders converted on their first set point opportunity as Britton and Diebler combined on a rejection to send Valpo into the intermission up two sets to none.

The final set played out much like the opening set, as an early 7-0 run gave Valpo a 9-3 advantage.  Diebler, Layman and Porché each registered kills during the run, while Diebler also picked up back-to-back service aces to cap the spurt.  Just as in the opener, UIC rallied back, tying the score at 12, but a 5-1 run, including two kills by Diebler and one by Britton, gave the Crusaders all the breathing room they would need.  Valpo would eventually convert on its second match point opportunity, as a setter dump by Bukowski closed out the sweep.

Bukowski quarterbacked the Valpo offense, which held a nine-kill advantage over UIC and hit at a solid .265 clip for the match, with 37 assists on the day, surpassing the 3,000-assist milestone for her career during the sweep.  Porché led all players with 14 kills, while Britton and Diebler each chipped in ten kills, the former hitting .421 and the latter swinging .364.

Valpo also excelled at the net defensively, putting up nine blocks on the day and out-blocking its opponent for just the second time this year.  Layman posted five rejections, while Diebler and Porché each were in on four blocks.  In the back line, Pokorny paced the Crusaders with nine digs.

“We played better today than we have for a while, which was nice to see,” said Avery.  “Our blocking was really good today, as we did a very good job keying on what we needed to do to slow UIC down.  Offensively, we also found a way to eliminate some unforced errors, which had hampered us in our last few matches.”

UIC (10-11, 5-3 Horizon) didn’t place anybody in double figures in kills, as Epiphany Davis and Lana Lobdell led the way for the Flames with eight kills apiece.  Taylor Szatkowski led all players with 11 digs.

“I am very proud of this team for going through the first half of the Horizon League season 7-1,” said Avery.  “There’s a lot of parity in the league this year, and I thought we did a good job handling the first half.  The most exciting part is that we still feel we’re getting better and better each week, that we’re still progressing as a team and figuring out ways to play at an even higher level.  Now we just need to approach and prepare for the second half of the league with the same focus we did in the first half.”

Valparaiso (13-6, 7-1 Horizon) will put its winning streak on the line in non-league action on Wednesday evening, as the Crusaders return home to the ARC to face Indiana State.  First serve is slated for 7 p.m., and all the action can be heard live on WVUR, 95.1 FM, Valparaiso and seen online on the Horizon League Network.  Links for both the audio and video will be available through www.valpoathletics.com, which will also have a link for live stats.