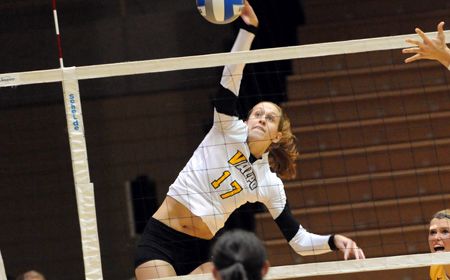 “We played very up-and-down throughout the match tonight, but when it got down to the end of each set, we found ways to get some key defense transition kills to win the big points,” said Crusader head coach Carin Avery.  “It was another good defensive night for us in terms of getting digs and keeping the ball off the ground, an area in which I feel we’re really hitting our stride, and that really set us up for the transition plays down the stretch in each set.”

The opener saw Valpo get out to a quick 7-3 lead thanks in large part to three early kills by Katie Britton (Mishawaka, Ind./Marian), but IUPUI rallied right back with a 6-1 run to take the lead at 9-8.  The set would remain tight through the middle stages, as Valpo held just a one-point advantage at 16-15, but the Crusaders scored five of the next seven points on a kill and a service ace by Tara Diebler (Indianapolis, Ind./Franklin Central), a solo block by Angie Porché (Lynwood, Ill./Thornton Fractional South) and a kill by Katie Layman (LaPorte, Ind./New Prairie) to push the lead to 21-17.

IUPUI would score the next three points, however, to force a Crusader timeout at 21-20, but out of the stoppage, Valpo’s offense stepped to the forefront.  Layman registered back-to-back kills to move the Crusader advantage back up to three points.  Amy Groesbeck (Wheaton, Ill./North) followed with a termination of her own to give Valpo set point, and the Crusaders would convert on their second opportunity on an IUPUI service error.

The scoreboard in the second set rested in the Jaguars’ favor for the most part, as IUPUI used an early four-point spurt to gain a lead it would hold throughout.  While Valpo was able to cut the lead down to one point on a trio of occasions, the Crusaders still trailed by four points at 21-17.  But Diebler registered a kill, and in a scene reminiscent of Valpo’s fourth-set comeback against Wright State, stepped back to the service line and reeled off three straight points, two of which came on Layman kills, to knot up the frame.

Out of an IUPUI timeout, the Jaguars took advantage of a Valpo attack error and a kill to go back ahead by two points at 23-21, but that would be the last point the Jaguars won in the frame.  An IUPUI attack error cut the Crusader deficit to one, and Layman and Porché combined on a rejection at the net to tie things up at 23.  Porché then flexed her offensive muscles, tallying one termination to give Valpo its first lead of the frame at 24-23, and then converted with another kill on set point to send the Crusaders into intermission ahead two sets to none.

The third set was the very definition of a back-and-forth affair, as it eventually featured 19 ties and eight lead changes, while neither team would gain more than a two-point lead at any point in the frame.  A kill and a solo block gave IUPUI a two-point advantage late at 23-21, forcing a Crusader timeout, but again Valpo would showcase its ability to come from behind late in sets.

The rally started with a kill by Britton, but a service error gave IUPUI two chances to send the match to a fourth set.  The Jaguars returned the favor with a service error of their own, however, and then committed an attack error that tied the set at 24.  Out of an IUPUI timeout, the Crusaders went back to their top offensive weapon for the match’s final two points, as Porché picked up kills on both the match’s penultimate point and the clinching point.

The Valpo attack ended the sweep extremely balanced Tuesday night.  Britton and Layman led the way for the Crusaders with 12 kills each and both hit at extremely high clips.  Britton committed no attack errors in her 25 swings to hit .480, while Layman recorded just two attack errors, swinging .435 for the match.  Diebler and Porché added 11 kills apiece, while Kim Bukowski (Waukesha, Wis./West) handed out 42 assists.

“Both Katies had very good offensive nights for us,” said Avery.  “They both did a great job with their shot selection and really gave IUPUI some problems.”

The Crusaders won the battle of the back rows in a big way, out-digging IUPUI Tuesday evening 83-66.  Freshman libero Taylor Root (Jenison, Mich./Jenison) led all players with 22 digs, while Pokorny added 15 digs.  Porché registered 12 digs of her own to record a double-double, while Haley Wise (Mishawaka, Ind./Mishawaka) tallied 11 digs as well, surpassing the 500-dig mark for her career in the win.

“Since the inception of the libero, I feel defensive specialists really have kind of gotten lost in the shuffle,” said Avery.  “They don’t often get a lot of credit for what they do, since they don’t always pick up big numbers, but Haley has been a major catalyst for us over the past four years in terms of transitioning from defense to offense.  Her and Andrea Balsis (Benton Harbor, Mich./Coloma) have both been key components in our success this season.”

Ashley Johnson led IUPUI (14-8) with 15 kills on .520 hitting, while Kalyse Reimbold was the only other Jaguar in double figures with ten terminations.  Monica Suding led all players with five blocks on the night.

Valparaiso (16-6) continues its road trip Friday night with a huge showdown at Horizon League co-leader Cleveland State.  First serve is set for 6 p.m., and all the action can be heard live on WVUR, 95.1 FM, Valparaiso and seen online on the Horizon League Network.  Links for both the audio and video will be available through www.valpoathletics.com, which will also have a link for live stats.