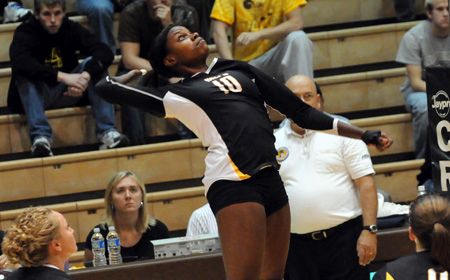 “It was very nice to get back onto the winning track today,” said Crusader head coach Carin Avery.  “I thought Kim Bukowski (Waukesha, Wis./West) did a very good job running our offense today, putting our hitters into position for a number of kills.  I love the fact that our team always plays hard at all times, an attitude that allows us to come back late in sets when we’re behind, like we did twice tonight.”

The Raiders held the lead through the midway point of the opening set, but a four-point spurt, including kills by Angie Porché (Lynwood, Ill./Thornton Fractional South) and Katie Layman (LaPorte, Ind./New Prairie), gave Valpo a 17-14 advantage.  Wright State would score the next two points to cut the lead to one, but another Layman kill gave the Crusaders the serve back and Taylor Root (Jenison, Mich./Jenison) would serve the final seven points of the set, as Tara Diebler (Indianapolis, Ind./Franklin Central) led the way with a pair of kills in the set-ending run.

Wright State again led most of the way during the early going of the second set before the Crusaders gained a small advantage approaching the frame’s end stages.  Leading 20-18, Valpo would give up four of the next five points to fall behind 22-21.  After a kill by Porché, a service error brought the Raiders within two points of winning the set.  But back-to-back terminations by Porché turned the tide in favor of the Crusaders, and Valpo would convert on its first set point opportunity, getting a block by Layman and Porché to go into intermission up two sets.

Trailing 6-4 early in the third frame, the Crusaders put together a big early-set run for the first time in the match, going on an 8-1 spurt to take a five-point advantage at 12-7.  Wright State rallied back to tie the set at 14, and held a lead as late as 21-20.  But as has occurred so often this season, Valpo put together a big late-set rally.  In this instance, the Crusaders scored the next four points on a kill by Diebler, two kills from Porché and a WSU attack error to earn match point.  On its second opportunity, Valpo got a kill from Diebler to close out the sweep.

Valparaiso was led by 16 kills on .306 hitting by Porché, while Diebler also added 13 kills on the afternoon.  Layman chipped in nine kills without an attack error, swinging at a .643 clip, while Katie Britton (Mishawaka, Ind./Marian) also posted nine kills while hitting .389.  Bukowski handed out 34 assists in the sweep, while Root led all players on the back line with 16 digs.

“Angie and Tara both did good jobs of leading us by picking up kills when we needed them most today,” said Avery.  “Both Katie B. and Katie L. also did well offensively today as well, hitting at high percentages which helped our other hitters to be freed up a little bit more.”

Wright State (10-15, 2-9 Horizon) was paced by 12 kills from Shaunda Sandifer, but she was the only Raider to reach double figures in the category as Valpo out-killed WSU by a 49-33 count.  Ashley Heyman led all players with four rejections.

Valparaiso (17-7, 9-2 Horizon) maintained its hold on second place in the league standings with the victory, and concludes its four-match road trip with another key Horizon League showdown next Friday, traveling to Indianapolis to take on Butler.  First serve is set for 6 p.m. CDT, and all the action can be heard live on WVUR, 95.1 FM, Valparaiso and seen online on the Horizon League Network.  Links for both the audio and video will be available through www.valpoathletics.com, which will also have a link for live stats.