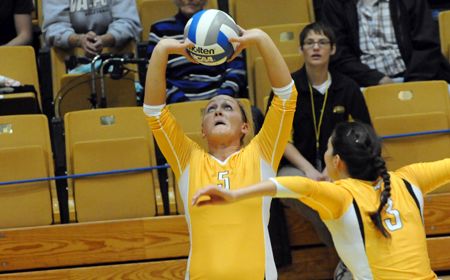 The night started out with a Crusader service ace, and by match’s end Valparaiso had tallied 11 more aces as it dominated UIC in every statistical category en route to a 3-0 (25-11, 25-18, 25-15) sweep Friday night in Horizon League action at the ARC.

“This was an excellent overall match from us, one of the best we’ve played all year,” said Crusader head coach Carin Avery.  “Looking at the stats, we really did well in every single facet of the game.  It really helped the flow of the match that we served very aggressively and, when we didn’t get aces, were able to receive a lot of down balls and free balls that we capitalized on.”

Root had the aforementioned ace to open the match as the Crusaders never trailed in the opening frame.  Back-to-back aces by Diebler were part of a five-point spurt that extended the advantage to 11-3, and with the score 12-5, Angie Porché (Lynwood, Ill./Thornton Fractional South) stepped back to the service line and served eight straight points to put the frame out of reach.

UIC would score the first three points of the second set, but it did not take Valpo long to regain the advantage, going on a 5-0 run to take an 8-5 lead.  The lead was just one at 9-8 when the Crusaders put together a six-point spurt to take control, again on the serve of Porché and thanks in large part to a trio of kills by Katie Britton (Mishawaka, Ind./Marian).  Valpo’s lead would not fall under five points the rest of the way as the Crusaders went into intermission up two sets.

The third set played out much like the second, as an early 7-2 Valpo lead was cut to just one point at 9-8.  The Flames were still within two at 14-12, but again a Crusader surge was too much for UIC to overcome, as Valpo ended the match on an 11-3 run, including four kills on the match’s last six points by Porché.

The Crusader offense was led by Porché, who picked up 11 kills, all in the final two sets, while swinging at a .429 clip on the night.  Britton also stood out on the outside, putting down ten kills on .360 hitting, while Diebler chipped in nine kills.  Kim Bukowski (Waukesha, Wis./West) handed out 30 of Valpo’s 41 assists in the win.

“I thought Kim just did a very good job tonight of distributing the ball evenly among our hitters,” said Avery.  “She did a great job keeping the UIC defense off balance all night long.  Everyone on both sides of the ball just executed so well tonight, which makes a match fun to watch.”

On the defensive side of the ball, Root picked up a match-high 12 digs while Pokorny added nine as well.  At the net, Diebler was in on five of Valpo’s eight team blocks and Bukowski made her presence known on three rejections, including her second career solo block.

No UIC (15-14, 8-6 Horizon) player was able to crack double figures in kills or digs, as Casie Sullivan led the Flames in both categories with eight apiece.  Lana Lobdell paced UIC with three blocks.

Valparaiso (19-8, 10-3 Horizon) hosts its final regular season home Horizon League match of the season Saturday afternoon at 4 p.m. at the ARC as the Crusaders take on Loyola.  It will be Senior Day, as the Crusaders recognize the careers of seniors Bukowski, Porché and Haley Wise (Mishawaka, Ind./Mishawaka) prior to the match.  Valpo will also be in search of its 20th victory of the season, trying to reach the milestone for the eighth straight year.  All the action can be heard live on WVUR, 95.1 FM, Valparaiso and seen online on the Horizon League Network.  Links for both the audio and video will be available through www.valpoathletics.com, which will also have a link for live stats.