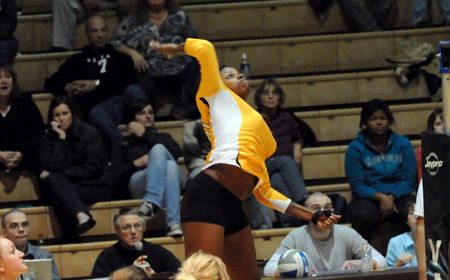 On Senior Night at the ARC, it was only fitting that Valparaiso volleyball seniors Haley Wise (Mishawaka, Ind./Mishawaka), Kim Bukowski (Waukesha, Wis./West) and Angie Porché (Lynwood, Ill./Thornton Fractional South) teamed up for the final point of a 3-0 (32-30, 25-14, 25-19) sweep of Loyola Saturday afternoon.  The win was the Crusaders’ 20th of the season, the eighth straight year they have won at least 20 matches.

“I don’t know if I have the words to describe how important this senior class has been to us,” said Crusader head coach Carin Avery.  “They were a big part of our transition up into the Horizon League, a much stronger league, and made the transition seem a lot easier than it should have been.  They have just done wonders for us on the court, and for them to have been a part of four 20-win teams is just an amazing accomplishment.  But even more importantly, they really epitomize the attributes any coach looks for in players.  They’ve worked hard and competed hard every single day and really have been great teammates.  Haley, Kim and Angie have all been invaluable to our program, and what they’ve done for us will last for years to come.”

Valparaiso has not had a season with less than 20 victories since Avery became head coach prior to the 2002 campaign.  The Crusaders were just one of 15 programs nationwide to have won at least 20 matches in each season from 2002-2008, and are just the eighth program on that list to reach the 20-win milestone thus far in 2009.

The opening set Saturday afternoon was one of the tightest frames imaginable, featuring an almost unfathomable 23 ties to go along with 11 lead changes.  Neither team was able to gain more than a two-point advantage until the Ramblers scored three points in a four-point span to make it 23-20 and force a Crusader timeout.  But Valpo answered immediately with a pair of kills by Katie Britton (Mishawaka, Ind./Marian) and a kill by Tara Diebler (Indianapolis, Ind./Franklin Central) to tie things up at 23 and set the stage for a battle to gain the opener.

Valpo would fight off three Loyola set point chances over the late stages of the frame, but had four set point opportunities of its own denied by the Ramblers.  The final Loyola set point of the frame came at 30-29, but Diebler came up with a termination to tie the set at 30 apiece.  Diebler then combined with Bukowski on an emphatic block at the net to earn Valpo’s fifth set point chance of the opener, which it converted on thanks to a kill by Britton.

“It’s always tough to play on Senior Night with the level of emotion in the building, not just for the seniors but for all the players,” said Avery.  “That emotion really showed in set one for us, because we weren’t using it for the better.  Also give Loyola a lot of credit in the opener, they were playing extremely hard, scrappy volleyball and blocking a lot, and really forced us to play almost perfect volleyball to beat them that first set.”

The momentum from the first set victory seemed to just carry over into the entire second set for Valpo, as after being tied 8-8, the Crusaders went on a big 9-1 run to take a 17-9 advantage, thanks in large part to three kills by Porché.  The Ramblers scored the next two points to cut the Valpo lead to six, but three straight points on kills by Porché and Pokorny and a service ace by Porché kept Loyola at bay and sent the Crusaders into intermission cruising along up two sets.

The third set would not come quite as easily for Valpo, as past the halfway point the Ramblers led 15-12, forcing a Crusader timeout.  A quick three-point spurt put the Crusaders right back in the thick of things and Valpo would eventually take its first lead since early in the frame at 18-17 on a Diebler kill.  Loyola responded with a kill to tie things up at 18, but the Crusaders ended the match on a 7-1 spurt, with the last four points coming on Wise’s serve.  The final point saw Wise pass a freeball to Bukowski, who found Porché on the left side as the seniors hooked up to close out the sweep.

While Porché stood out on the offensive side of the ball as she often does, racking up a match-best 17 kills, her defensive effort Saturday was one of the best of her career, as she led all players and tied her career high with 21 digs on the evening for her 11th double-double of the season.  Bukowski handed out 46 assists, surpassing the 1,000-assist barrier for the year, and also chipped in seven digs and five kills, while Wise tallied ten digs, her fourth double-figure dig effort of the year despite playing only two sets.

Diebler also had a standout match on the offensive side of the ball, putting down 16 kills on .371 hitting Saturday.  On the back line, Taylor Root (Jenison, Mich./Jenison) tallied 19 digs and now has 494 digs on the season, ninth-most in a single year in Valpo history and just two shy of matching Valpo’s freshman single-season record in the category.  Jenny Pokorny (Geneva, Ill./Geneva) stood out from the service line, recording a career-high four aces one night after picking up three.  Pokorny also was the fourth Crusader in double figures in digs, registering 17 on the match.

Loyola (11-17, 4-11 Horizon) failed to have anybody reach double figures in kills, as the Ramblers were able to tally just 34 kills over the three sets.  Mallory Curran led Loyola with eight kills on .333 hitting while also posting a match-high five blocks.  Alyse Serritella paced the Ramblers on the back line with 17 digs.

“The end of set one was really the most important part of the match for us from a mental standpoint,” said Avery.  “Not only because we won the set, but because we really just started playing more aggressively and not letting Loyola’s block worry us, but just continuing to swing.  Once we realized we could still score points that way, we took it into the final two sets and it propelled us to the win.  You could really tell today that both teams had a lot riding on this match.  Loyola played hard all night long, and forced us to play very good volleyball in order to win.”

Saturday’s victory, combined with Cleveland State’s loss at Milwaukee, moved Valpo into a tie with the Vikings in the loss column of the Horizon League standings.  The Crusaders now control their own destiny in terms of obtaining at least a share of the league regular season title, as they will finish atop the standings if they sweep next weekend at Milwaukee/Green Bay.  Valpo can also still gain an outright championship and host the league tournament if it wins both next weekend and Cleveland State loses Friday night to YoungstownState.

Valparaiso (20-8, 11-3 Horizon) close out the regular season at the ARC on Tuesday evening as the Crusaders welcome Chicago State to town for a non-league match.  First serve is slated for 7 p.m., and all the action can be heard live on WVUR, 95.1 FM, Valparaiso and seen online on the Horizon League Network.  Links for both the audio and video will be available through www.valpoathletics.com, which will also have a link for live stats.