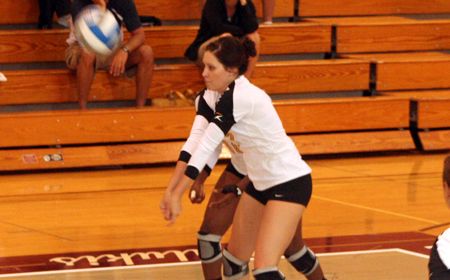 The opening set featured ten ties and five lead changes.  The Broncos rallied from a 16-13 deficit to score three straight points to force a 16-16 tie before Valpo went on a 5-3 spurt, featuring kills by Katie Britton (Mishawaka, Ind./Marian) and Jenny Pokorny (Geneva, Ill./Geneva) and a pair of terminations by Tara Diebler (Indianapolis, Ind./Franklin Central), to take a 21-19 advantage.  After WMU scored three straight points to take the lead back, Angie Porché (Lynwood, Ill./Thornton Fractional South) tallied a kill to tie things up at 22, but the Broncos scored three more points in a row to close out the opener.

Neither of the final two sets was quite as close for the Crusaders.  Valpo cut a four-point deficit to two points midway through the second set, but WMU responded with four straight points to take control of that frame for good and enter intermission with a two-set lead.  The final set saw the Broncos run out to leads of 10-1 and 14-2 en route to earning the sweep.

Valparaiso’s three graduating seniors all saw multiple sets of action on Saturday in Kalamazoo.  Porché posted ten kills and eight digs in her final career match and closed her career with 2,046 career kills and 5,171 career attacks, both Crusader all-time records, to go along with 1,101 career digs.  Kim Bukowski (Waukesha, Wis./West) dished out 27 assists and eight digs and ended her career with 3,543 career helpers, third-most in Valpo history, while Haley Wise (Mishawaka, Ind./Mishawaka) tallied five digs in her final match and finished her four years with 572 career digs.

“It was bittersweet to send our seniors off tonight,” said Crusader head coach Carin Avery.  “The result wasn’t what I was hoping for for the three of them, but they have all been a big part of this program, helping to lead the team into the Horizon League, and have all made contributions to our team beyond the stat sheet that will live on for years to come.”

Britton led the Crusaders offensively with 11 kills without committing an attack error, hitting at a .423 clip for the evening.  Freshman libero Taylor Root (Jenison, Mich./Jenison) paced Valparaiso (22-11) with 22 digs on the back line.

Western Michigan (24-11) hit .378 as a team on Saturday, led by a .556 effort from Michelle Moore, who posted 15 kills without an attack error.  Jessica Brown and Katie Eberling each also hit over .400 for the Broncos, who got a match-best 26 digs from Caitlin Strimel.