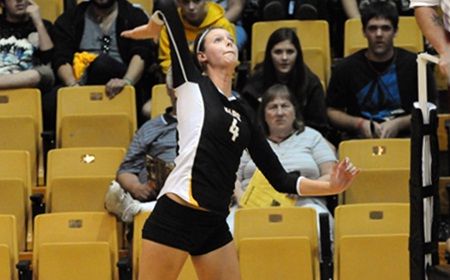 Valparaiso made short work of Presbyterian College in the opener of the CEFCU Classic at Bradley Friday afternoon, sweeping the Blue Hose (25-18, 25-11, 25-17) in just over an hour.  The win was the Crusaders' eighth straight victory and moved Valpo to 8-1 on the season, matching the second-best start in program history.

The tone was set immediately from the start of the match, as Katie Britton (Mishawaka, Ind./Marian) tallied three kills and Tara Diebler (Indianapolis, Ind./Franklin Central) two kills in the first ten points of the match as Valpo jumped out to an 8-2 lead.  The Blue Hose would rally back to within 9-7, and after the Crusaders extended back out to 18-9, PC put together a 6-1 run to close the lead to 19-15 and force a Valpo timeout.  But out of the stoppage, Sarah Dooms (Greenwood, Ind./Center Grove) tallied back-to-back kills and Britton followed with three straight terminations to push the lead back to nine points before Diebler eventually ended the frame with a kill.

Valpo led just 5-3 in the second set before putting together a massive 10-1 run to take firm control of the frame, most of it coming on the serve of Andrea Balsis (Benton Harbor, Mich./Coloma).  Diebler posted a trio of kills and also picked up a block during the run, while freshman outside hitter Kelsey Victor (Logansport, Ind./Logansport) made her Crusader debut and registered her first career kill during the spurt.  With the lead at double figures, the Crusaders cruised from there and ended the set with four straight points on the serve of Sarah Chrabaszcz (Reedsburg, Wis./Reedsburg Area), the final coming on a Victor kill.

The third and ultimately final set provided the toughest challenge of the afternoon for the Crusaders, as after jumping out to a 6-2 lead, the Blue Hose posted six straight points to take its first lead in any of the three sets.  But a kill by Amy Groesbeck (Wheaton, Ill./North) stopped the PC spurt while simultaneously starting a 10-2 Valpo run, culminating with a kill by Jenny Pokorny (Geneva, Ill./Geneva) to put the Crusaders ahead 16-10.  While the Blue Hose closed to within four points late at 21-17, Victor registered three straight kills, two coming from the ten-foot line, to give Valpo match point and the Crusaders converted on their first opportunity thanks to a PC attack error.

“We're learning to keep our mental focus a little better than we did our first two weekends, and I think it's shown with the way we've swept the last two times out,” said Crusader head coach Carin Avery.  “It was nice to be able to rotate in some reserves today and get them valuable experience.  It was especially awesome to get Kelsey back and see her in action coming off an injury, and she did some really nice stuff for us today.”

Britton paced the Crusaders with 11 kills on .391 hitting, while Diebler also reached double figures with 10 kills while swinging at a .474 clip.  Dooms and Groesbeck each put down six kills on .357 hitting and Victor debuted with a five-kill performance.  The Crusader offense doubled up Presbyterian (2-4) in kills, 46-23, and hit at a .283 clip overall, thanks in large part to 32 assists by Pokorny.

“Both Tara and Katie have really stepped up for us offensively,” said Avery.  “They've both done a really good job so far this year as the two you would expect to take over offensively after their success last season in the front row.”

Pokorny also picked up a pair of service aces as Valpo aced the Blue Hose five times.  On the back line, Taylor Root (Jenison, Mich./Jenison) once again led all players with 19 digs and Ariel Cudney (LaPorte, Ind./LaPorte) reached double figures for the third time in her career with 10 digs.  Diebler and Groesbeck led the Valpo effort at the net, each joining in on three of the Crusaders' six team blocks.

Valparaiso (8-1) looks to perhaps match the best start in school history and also take its third consecutive in-season tournament title on Saturday with a pair of matches from Bradley.  The Crusaders face Hofstra at 9:30 a.m. before closing tournament play against the host Braves at 7 p.m.  Both matches can be heard live on WVUR, 95.1 FM, Valparaiso and online at www.valpoathletics.com, which will have links for live stats and live chat for both matches as well.