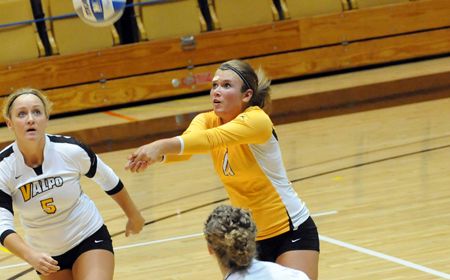 The Valparaiso volleyball team matched the best start in school history and became the first team in program history to win three straight in-season tournament titles, defeating host Bradley, 3-1 (21-25, 25-14, 25-16, 25-13) Saturday evening to earn the CEFCU Classic championship.  The win is the 10th straight triumph for the Crusaders as they prepare for the start of Horizon League play next weekend.

“Taylor has just been unbelievably steady in serve receive for us, her serving has been outstanding and her defense has been phenomenal,” said Crusader head coach Carin Avery.  “She just keeps getting better and better every week.  Tara pulled together another great weekend after last weekend.  She's been a great go-to player; when we need kills, she's been able to execute.  She really ended last season on a great note and has continued so far this year.  Jenny has shown her outstanding all-around play all through the early season and especially this weekend.  She's not just a setter, but she's also an attacker, a server, a defender and a blocker.  We are so lucky to have a setter in Jenny who's so great at all facets of the game.”

The 10-1 start matches the 2003 Crusader squad, which would eventually advance to the NCAA Tournament, for the best start in program history.  The 10 consecutive victories also ties for the third-longest winning streak all-time at Valpo, while only the 2006 Crusader team won three in-season tournament titles in the same season, albeit not consecutively, prior to Saturday night.

“Obviously, we are really proud of the players for where we're at right now,” said Avery.  “I think especially with the fact we bussed everywhere and had long trips, the team handled the wear and tear and the grind of road really well.  We did a great job mentally and physically getting through that.  I do think we still have a lot to work out, but this was a great starting point for us, and we're excited to get into the league season.”

The beginning of Saturday night's match against the host Braves brought about the first sub-optimum set for the Crusaders this week.  Valpo hit just .188 in the opener while Bradley hit .343 with 15 kills in the first set.  The Braves jumped out to a 12-7 lead, but Valpo scored four straight points to keep within striking distance and a kill by Amy Groesbeck (Wheaton, Ill./North) would tie the set at 18.  But the Braves picked up three straight kills and went on to take the opening frame.

The second set went much smoother for the Crusaders, as they jumped out to a 6-2 lead to force an early Bradley timeout.  The Braves rallied to within 8-6, but Groesbeck came up with a kill and Ariel Cudney (LaPorte, Ind./LaPorte) rotated back to serve.  Valpo won five straight points on the freshman's serve, including a pair of service aces for Cudney and two kills from Sarah Dooms (Greenwood, Ind./Center Grove), to push the advantage up to eight points.  The lead never fell below seven points the rest of the way as the Crusaders went into the in-game break tied at a set apiece.

“We didn't really follow our game plan in set one, and you could tell,” said Avery.  “You have to give Bradley credit as well.  They were playing very good volleyball in that set, and we didn't have an answer.  In set two, we did a much better job sticking to our game plan, executed well and stuff started falling our way.”

Bradley led early in the third set, but back-to-back aces by Pokorny gave the Crusaders the lead for good.  The lead was just 8-7 when Dooms came up with a kill to give Valpo the serve back, and again Cudney would go on a service run.  The Braves finally sided out after six straight points by the Crusaders on Cudney's serve which pushed the lead to 15-7.  Bradley closed back to within 16-11, but Katie Britton (Mishawaka, Ind./Marian) posted kills on three of the next six points as the Crusaders went ahead 21-12 and traded points the rest of the way to go up 2-1.

Diebler registered three straight kills early in the fourth set to put Valpo ahead, a lead it would not relinquish.  The Crusaders were ahead 6-2 and had pushed the lead to 10-5 before putting together a massive 14-3 run to all but close it out, a run that featured kills by seven different Crusader attackers.  Bradley (4-6) posted five straight points late, but a Brave service error eventually closed out the set, match and tournament in favor of Valpo.

Diebler led Valpo Saturday night with 15 kills while attacking at a stellar .444 clip.  Britton posted 13 kills, while Katie Layman (LaPorte, Ind./New Prairie) reached double figures with 10 kills.  Pokorny handed out 49 assists while putting down five kills of her own on just 10 attacks, as the Valpo offense posted 64 kills on .278 hitting for the match.

The Crusaders tallied nine service aces against the Braves, four coming from Cudney and three off the hand of Root.  Root also paced Valpo with 22 digs, while Cudney registered 15 digs and Dooms added 14 of her own.  At the net, the Crusaders totaled six team blocks, led by three apiece from Diebler and Layman.

“We've been really lucky to have Ariel join our team this year,” said Avery.  “Serving hasn't been our strong point the last few years and we've been putting big emphasis on it, and just by having her in the program we've gotten stronger.  Her serving, but also her defense and ball control, have really been great additions to our starting lineup.”

Valparaiso (10-1) opens Horizon League play and its 2010 home slate simultaneously Friday evening as the Crusaders host Wright State at the ARC.  First serve is slated for 7 p.m., with live video through the Horizon League Network available at www.valpoathletics.com.  The audio broadcast can be heard live on WVUR, 95.1 FM, Valparaiso and online as well, while a link for live stats will also be available on the official Crusader website.