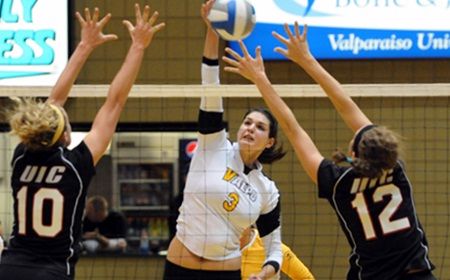 Valparaiso took the first set Saturday evening from Cleveland State Saturday evening at the Athletics-Recreation Center, but the Vikings came back to earn a 3-1 (21-25, 26-24, 25-22, 25-18) victory over the Crusaders in Horizon League play.

The opening set was about as close as a set can be contested, as neither team would gain more than a two-point edge until the closing points.  With both sides siding out at very high rates, the set contained 15 tie scores.  Finally, with the score 20-all, Jenny Pokorny (Geneva, Ill./Geneva) picked up a kill and then set up Amy Groesbeck (Wheaton, Ill./North) for a kill to make it 22-20, forcing a CSU timeout.  Out of the stoppage, Groesbeck combined with Tara Diebler (Indianapolis, Ind./Franklin Central) on a big block to go ahead by three, followed by a solo block by Katie Britton (Mishawaka, Ind./Marian) to cap the four-point spurt and bring up set point.  On the second chance, the Vikings served long, giving Valpo the 1-0 advantage.

The second set saw the Crusaders jump out to a quick 8-4 lead, with their first three points all coming on Sarah Dooms (Greenwood, Ind./Center Grove) kills.  But CSU fought back, tying the score up at 11 to force Valpo’s first timeout and coming out of the stoppage with an additional 4-1 spurt, resulting in the Crusaders’ second timeout trailing 15-12.  A Viking service error stopped runs of 6-0 and 13-4, but after siding out, the Crusaders earned the next three points, including a kill by Britton and a block from Britton and Diebler to force a CSU timeout at 18-16.

Out of the timeout, CSU scored two straight, but a service error and then an ace by Pokorny gave the two points right back to the Crusaders.  The teams then traded sideouts all the way until Cleveland State earned set point at 24-21.  Katie Layman (LaPorte, Ind./New Prairie) staved off both the first and second Viking chances with kills, getting Valpo to within 24-23, and then combined with Pokorny on a block to tie the frame at 24-all.  But CSU’s Megan Barhorst took care of an overpass to earn another set point chance, and Lindsey Griffith tallied a kill for the Vikings to send the match into the in-game break at one set apiece.

Cleveland State looked to have control of the third set, leading halfway through at 13-8, but the Crusaders were determined to battle back, putting together a 6-2 spurt, including a pair of kills by Layman to close within 15-14.  Valpo would actually tie the set at 17 on a Groesbeck kill and at 18 on a Diebler kill, but could never regain the advantage outright.  Two straight CSU points gave it a 20-18 lead and the two teams just sided out from there, as Valpo was never able to tie it up again, falling behind two sets to one.

The start of the fourth set looked like a dream beginning for the Crusaders, as kills from four different players and a service ace by Ariel Cudney (LaPorte, Ind./LaPorte) were part of a 7-2 beginning.  But the dream turned into a nightmare just as quick, as CSU backup setter Annie Djukic converted on a setter dump attempt to get out of Cudney’s service run, and then stepped back to the service line herself as the Vikings reeled off a 10-0 run to take a 12-7 lead.  Two straight Valpo points on kills by Britton and Dooms got it back within 12-9, but CSU scored the next four to take control and eventually go on to the victory.

Diebler paced the Valpo offensive effort Saturday, racking up 14 kills on a stellar .545 hitting percentage.  Dooms tallied 11 kills, while Layman totaled 10 kills.  Pokorny handed out 48 assists as well.  Taylor Root (Jenison, Mich./Jenison) led all players with 23 digs, while Dooms racked up 17 for a double-double and Val Bollenbacher (Bremen, Ind./Bremen) added 10 digs.  Diebler led the way for the Crusaders at the net as well, joining in on five of Valpo’s 10 team blocks.

Kara Koch led Cleveland State (15-1, 6-1 Horizon) with 19 kills, while Amy Benz hit .481 with 14 kills out of the middle for the Vikings.  Amy Grabiec led CSU with 21 digs and the Vikings totaled 15 blocks on the evening, eight coming from Benz and seven by Barhorst.

Valparaiso (15-4, 4-3 Horizon) looks to close out the first half of Horizon League play on a winning note on Sunday afternoon, as the Crusaders host Youngstown State in matinee action at the ARC.  First serve is set for 3 p.m., with both audio and video webcasts available online at www.valpoathletics.com.  The audio will also be available locally on WVUR, 95.1 FM while live stats will also be available through the official Crusader website.