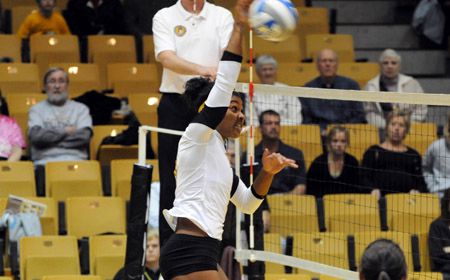 A career-best 15 kills from sophomore outside hitter Mary Dent (Chicago, Ill./Von Steuben) spurred Valparaiso on to a straight-set sweep (25-21, 25-21, 25-21) over Youngstown State Sunday afternoon in Horizon League play at the Athletics-Recreation Center.

Dent, who was part of the starting lineup for the first time in 2010, made the most of her starting opportunity, racking up seven kills on just 11 swings in the first set alone.  The sophomore ended the match hitting .282, committing just four attack errors against her match-best 15 kills.  Meanwhile, fellow sophomore Taylor Root (Jenison, Mich./Jenison) was her normal stalwart on the back line.  One night after becoming the fastest Crusader to reach 1,000 career digs, Root led all players Sunday with 24 digs, the second-best performance of her career in a sweep.

“I thought our sophomore class really played outstanding tonight, a great 1-2 punch,” said Crusader head coach Carin Avery.  “Taylor’s serve receive and her defense were phenomenal.  And hands-down, this was Mary's best match of her career so far at Valpo.  Her kills might stand out, but it was other little things she did in terms of serving, defense, blocking that she has really picked up over the last few weeks.  She played an awesome match for us today.”

The match got off to an inauspicious start for Valpo, as the Crusaders used both timeouts early when they fell behind 5-1 and 10-5.  With the score still 15-9 in Youngstown State’s favor, Valpo put together a 5-0 run, including kills by Sarah Dooms (Greenwood, Ind./Center Grove) and Amy Groesbeck (Wheaton, Ill./North) and a solo block by Katie Layman (LaPorte, Ind./New Prairie) to close within one at 15-14.  The Penguins pushed their lead back to 18-15, but a kill by Dooms and back-to-back blocks from Layman and Jenny Pokorny (Geneva, Ill./Geneva) tied the frame at 18-all.  Dent then took over, putting down five kills in a nine-point span to give Valpo set point at 24-21, which it converted on a block by Katie Britton (Mishawaka, Ind./Marian) and Tara Diebler (Indianapolis, Ind./Franklin Central).

The Crusaders used a 5-0 spurt midway through the second set, featuring Dent’s first career service ace, to turn a 10-9 deficit into a 14-10 lead.  The Penguins didn’t go away, fighting back to tie the set at 16 apiece, and YSU was still right with Valpo later on at 19-19.  A kill by Dent and a YSU attack error gave Valpo the 21-19 edge, but out of a timeout, the Penguins posted two straight points to again tie the frame at 21.  But Dent tallied yet another kill, followed by back-to-back kills from Val Bollenbacher (Bremen, Ind./Bremen), and then a kill by Dooms sent Valpo into the in-game break up two sets to none.

The third set was tight throughout, featuring 15 ties and nine lead changes while neither team would hold more than a two-point edge until the final points.  Trailing 18-16, Valpo used a timeout and got a kill by Bollenbacher and a block from Britton and Layman to tie things up again at 18.  But YSU responded with three of the next four points to seemingly put itself in the driver’s seat up 21-19.  Back-to-back kills by Dent quickly erased that small edge, and out of a Penguin timeout, it was Diebler and then Dent with kills to give Valpo a 23-21 edge.  Youngstown State would commit attack errors on each of the match’s final two points as the Crusaders completed the sweep.

Dent was the only Crusader to finish in double figures in kills, with Dooms adding nine and Diebler seven.  Pokorny handed out 43 assists and narrowly missed a double-double with nine digs.  Layman matched her season high with five blocks to pace Valpo at the net as it racked up eight total team rejections.

Youngstown State (2-19, 0-8 Horizon) was led by 12 kills from Marissa Hundelt and 10 kills on .350 hitting by Tasha Reid.  Brianna Kern led three Penguins in double figures in digs, registering 20, while Haley Kapferer was in on a match-best seven blocks.

“I think we learned a lot about our team through the first half of a really competitive Horizon League schedule,” said Avery.  “Through our three losses, we’ve really identified areas we have to continue to work on, but I’m really excited about the potential this team has as the end of the season approaches.”

Valparaiso (16-4, 5-3 Horizon) hits the road to start the second half of Horizon League play next weekend, traveling to Indianapolis and then Dayton.  Butler is first up, with a 6 p.m. CT serve on Friday night.  Live audio and video webcasts are both available at www.valpoathletics.com, while the audio broadcast will also be available locally on WVUR, 95.1 FM.  Links for live stats and live chat will also be available through the official Crusader website.