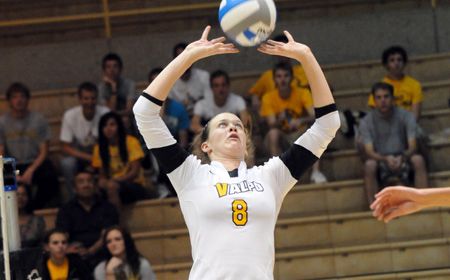 Pokorny handed out 36 assists Saturday and attacked a career-high 26 times for 11 kills, also a career best.  The junior had nine digs until the match's final point, when she recorded a dig to reach double figures in that category with 10 as well.  Pokorny, whose previous triple-double came on Oct. 31 last season against Oakland, also set a new career high with five blocks Saturday.

“It was fun to see Jenny get a triple-double this season,” said Crusader head coach Carin Avery.  “She's been so close a number of times this year, and it just goes to show what a versatile setter she really is for us.”

Pokorny was part of the Crusaders' best effort in recent history at the net defensively.  Valpo tallied 14 total team blocks, its highest total since posting 17 blocks against Oral Roberts in the Mid-Con championship match on Nov. 18, 2006.  Senior middle Katie Layman (LaPorte, Ind./New Prairie) matched her career high with eight blocks to pace the Crusaders at the net, while junior right side Amy Groesbeck (Wheaton, Ill./North) tied her season-best with five rejections.  Senior middle Tara Diebler (Indianapolis, Ind./Franklin Central) was in on four blocks as well for Valpo.

“After last night's match, our top priority coming into tonight was to improve our blocking,” said Avery.  “We felt that if our blocking was where it needed to be, the rest of our game would fall into place.  Obviously, the stats show we were able to execute that part of our game plan and it's just great that we actually got our blocking going.”

Wright State jumped out to a 9-5 advantage in the opening set, but a 4-0 run with kills by Diebler and Katie Britton (Mishawaka, Ind./Marian) and an ace by Pokorny got the Crusaders tied up again at 9-all.  The teams went back and forth until another 4-0 spurt with kills by Britton and Sarah Dooms (Greenwood, Ind./Center Grove) and a block from Britton and Diebler turned a 16-15 deficit into a 19-16 advantage.  The Raiders fought back to within one point at 22-21, but Dooms tallied a kill and then combined with Layman on a block to give Valpo set point.  On their second chance, the Crusaders ended the set thanks to a second-touch attack from Pokorny.

The second set was trending in Valpo's favor early, as a pair of blocks by Layman and Pokorny, an ace from Dooms and a kill by Pokorny highlighted a 6-0 run to start the frame.  But with the score 10-3, Wright State went on a 7-1 run to close to within one point at 11-10.  Valpo would maintain a slim lead or at least remained tied for much of the remainder of the set, but leading 21-20, the Crusaders gave up three straight points.  Diebler tallied a kill and then joined with Groesbeck on a block to tie the set at 23, but Wright State recorded a kill to take the 24-23 advantage, and then following a hitting error, picked up two straight blocks to take the second set.

Utilizing every second of the in-game break before returning to the floor, Valpo took a 9-5 lead early in the third set, including a pair of kills from Kelsey Victor (Logansport, Ind./Logansport).  The Raiders answered with a 5-1 spurt to tie the frame at 10-all, but that was when the Crusaders laid down the hammer.  Valpo went on an 8-0 run, featuring two kills each by Layman and Pokorny, to jump ahead 18-10.  Then, after Wright State scored the next two points, the Crusaders scored seven straight to cap a set-ending 15-2 run, including two blocks by Layman and Pokorny, an ace by Dooms and kills from Layman and Victor.

The momentum from the third set carried right over into the fourth for the Crusaders, as they scored six straight points early on to take a 6-5 lead up to 12-5.  Pokorny picked up two more kills during that spurt, while Victor also tallied a pair of terminations during the run.  Wright State briefly quelled Valpo's momentum with a kill, but the Crusaders got back-to-back kills by Pokorny, a Diebler kill, a block from Diebler and Pokorny and then a solo rejection by Victor to make it a 17-6 lead and cap runs of 5-0 and 11-1.  Wright State eventually closed back to within 21-15 after a five-point spurt, but a service error returned the serve to Valpo and Layman, Dooms and Groesbeck would tally kills to close out the match.

Layman supplemented her career-best defensive effort by narrowly missing her career high offensively, posting a team-best 12 kills on .333 hitting.  Diebler chipped in 11 kills as well, while for the second straight day Victor matched her career high with five kills despite playing just the final two sets.  On the back line, Taylor Root (Jenison, Mich./Jenison) tied for match-high honors with 26 digs, while Dooms tied her career best with 19 digs.  Val Bollenbacher (Bremen, Ind./Bremen) chipped in 11 digs as well.

“I think Katie's even been kind of frustrated that she hasn't been blocking more balls recently,” said Avery.  “It was great to see her have the output she did tonight, both the number of blocks and the number of other touches she had at the net.  Offensively, she was very hard to stop tonight.  She did a great job with her shot selection and Wright State really didn't have an answer for her attacks.”

Wright State (8-14, 3-7 Horizon) got 12 kills apiece from Shaunda Sandifer and Heidi Splinter, the former of which also led all players with nine blocks.  Jessica Woods registered 26 digs, while Splinter picked up 20 digs as well.

Valparaiso (17-5, 6-4 Horizon) steps out of league play Tuesday evening as the Crusaders travel to take on former Mid-Con rival Oakland.  First serve is slated for 6 p.m. CT, and all the action can be heard live on WVUR, 95.1 FM, Valparaiso and online at www.valpoathletics.com, which will also have a link for live stats.