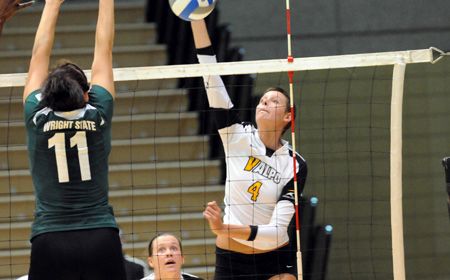 The win clinches at least the fourth seed for the Crusaders in the upcoming Horizon League Championship.  Friday's win was keyed offensively by Britton, who hadn't reached double figures in the kills column since Oct. 1 at Milwaukee, a span of 12 matches.  Friday, the junior picked up her 20 kills on just 44 swings.

“Katie was really our bright spot in the first set,” said Crusader head coach Carin Avery.  “She was pretty much our only attacker not committing errors in the first set.  Katie was really blocking well tonight and moving the ball around well.  She mixed up her shots, got out of her comfort zone and had Youngstown State back on their heels.  Because she mixed up her shots well, she really opened up a lot of areas that she was able to take advantage of throughout the match.”

Meanwhile, on the defensive side of the ball, Valpo held Youngstown State to just 33 kills over the four sets while forcing the Penguins into 26 attack errors, including eight team blocks.  The Penguins' .045 attack percentage was the worst by a Crusader opponent in league play since Valpo's days in the Mid-Con, when it held Centenary to .000 hitting in a sweep on Sept. 30, 2006.

The match took an unexpected turn in the opening frame, as Youngstown State came out playing point-for-point with the Crusaders.  Valpo claimed an 18-16 lead after a three-point spurt on a solo block by Jenny Pokorny (Geneva, Ill./Geneva) and back-to-back kills by Britton, but the Penguins answered with the next two points to tie the set at 18-all.  The two sides sided out on the next four serves to make it 20-20 before YSU ended the frame on a 5-1 run to claim the opening set.

“We started off slow tonight with what always seems to be our Achilles heel, making a lot of errors,” said Avery.  “We allow teams to get in their rhythm because we are making errors, and we just made too many errors in that first set and gave Youngstown State momentum.  We weren't doing a good job taking care of the ball either.  Going into set two, we needed to first take care of the ball better and then eliminate errors, and we were able to do that in the last three sets.”

The Crusaders claimed the lead for good early in the second set, but led just 9-8 before a five-point run on kills by Sarah Dooms (Greenwood, Ind./Center Grove) and Britton, a block by Britton and Katie Layman (LaPorte, Ind./New Prairie), and following a YSU timeout, back-to-back kills by Layman which made it 14-8.  YSU closed back to within 17-15, but kills by Val Bollenbacher (Bremen, Ind./Bremen) and Mary Dent (Chicago, Ill./Von Steuben) forced a Penguin timeout.

After the stoppage, Dent tallied another kill, followed by a termination from Ellen Vanden Berg (Little Chute, Wis./Little Chute) and a YSU error which capped another 5-0 run that gave Valpo a 22-15 lead.  The set eventually ended on another kill by Dent, one of 20 Valpo kills in the set, as the Crusaders entered the in-game break tied at a set apiece.

The third set featured the Crusader defense, as Valpo held Youngstown State to just three kills as opposed to nine attack errors in the set.  The stellar defensive effort helped the Crusaders turn an 8-6 lead into a 22-7 advantage, a monstrous 14-1 run that featured three kills by Britton and two kills and a block from Pokorny.  Vanden Berg registered a solo block late to give Valpo set point and then picked up a kill two serves later to put the Crusaders ahead 2-1 heading into the fourth set.

Three early kills by Dooms and a pair of kills by Tara Diebler (Indianapolis, Ind./Franklin Central) helped turn a 5-3 lead into a big 13-4 advantage for the Crusaders in the fourth set.  Valpo led by as much as 17-7, but the Penguins had one big rally left, scoring eight straight points to close within 17-15.  Back-to-back YSU attack errors snapped its run, however, and Valpo took advantage, as the Crusaders got three late kills by Dooms, including back-to-back terminations to close out the match.

Britton was the only Crusader to finish in double figures in kills, as Dooms was the second-highest in the category with nine kills.  Pokorny dished out 48 assists to go with 16 digs and a match-high four blocks.  Vanden Berg had easily the best match of her young career, coming off the bench after the first set to contribute a career-best seven kills on .300 hitting while also posting three blocks, two of the solo variety.

“Ellen did a wonderful job for us tonight,” said Avery.  “She came right in when we were a set down and played great.  Ellen's a very good player, but has been behind a pair of seniors in the middle all year.  With our middles struggling a bit tonight, it was great to be able to bring her in.  She really gave us a lot of life and energy, and Jenny really got her the ball in great positions.  We worked on a lot of different shots this week in practice, and she came out and used those shots to score a lot of points.”

Five Crusaders finished in double figures in the digs category as Valpo, ranked second in the nation in the category entering the match, picked up 92 digs in just four sets, led by 21 digs from national leader Taylor Root (Jenison, Mich./Jenison).  Bollenbacher tallied 17 digs in the winning effort, while Dooms added 12 and Andrea Balsis (Benton Harbor, Mich./Coloma) chipped in 10 digs.

Valparaiso (22-6, 9-5 Horizon) closes out weekend action tomorrow afternoon at Cleveland State.  First serve against the Vikings is set for 3 p.m. CT, and all the action can be heard and seen live at www.valpoathletics.com, which will also have a link for live stats.